A documentary titled “Pseudology: The Art of Lying” tells what many of us already presumed. Watching television does put the viewer in a suggestible, almost hypnotic, state of conscience and suppresses our ability to think critically. 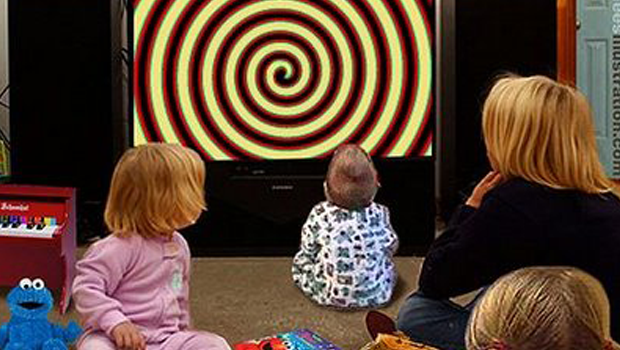 The documentary (http://www.youtube.com/watch?v=D4eFdtxBjmw) explains: “If you’ve ever experienced a conscience fog after watching television, you’re not alone. The brain has four modes that it operates in, and four brain wave patterns. Delta is when you’re deep asleep, Theta is when you’re in light sleep, Alpha is awake but relaxed, it’s the mode of thinking that you are in when you’re in the most heightened state of suggestibility, and then there’s Beta, the highest functioning mode like when you’re reading a book or you’re having a very stimulating conversation.”

According to research dating back to the 1960’s, scientists have consistently found that in less than a minute of television viewing time the brain switches from Beta to Alpha state, where the conscience is very suggestible and loses its capacity to clearly determine between right and wrong. “In about 90 seconds of viewing it, the frontal lobe circulation begins to go down and it actually has an adverse effect.” – Dr. Neal Nedley.

The frontal lobe is the part of our brain which deals with morality, spirituality, judgment, and decision making. Without it our personalities are virtually nonexistent and we have essentially no agency or conscient connection to a higher spiritual power.

Even more interesting are studies investigating the affect of night time television viewing on how a person feels the following day. As it turns out, the more television you watch at night, the more likely you are to have a bad next day.

“Studies will clearly demonstrate that when you go to entertainment as a way to either get fun and it becomes a habitual process, the risk of depression and anxiety will more than double.”

In a way, television not only influences our state of conscience, but in extension, the way we perceive the world around us. Dr. Michael Rich is an expert in the area of the effect TV has on the conscience and describes the experience of watching a 3D movie like this: “So what does your brain do when you’re sitting there in a theater, looking at a giant screen, wearing 3D glasses, swimming in surround sound, and processing the 24 images that flip by per second? Your brain dutifully processes those stimuli – and does little else. In fact, your pre-frontal cortex, which is involved in impulse control, future thinking, and moral choices, is basically inactivated in this process. That’s part of why you ‘get lost’ in the movie.”

It’s not easy to cut out screen time entirely. However, we can all take steps to get outside, appreciate nature and community, and take back our capacity to think for ourselves.