The supreme Shakti (in her aspect of Kali) assumes the responsibility of creating the names, as well as their evolution in manifestation. Her sovereignty is often mentioned in the Tantric texts by the name Adimahavidya, which means the first of the Great Cosmic Powers, but this must not induce the idea of a hierarchy, but rather that of an order of becoming of the macrocosm. Thus, one of the many representations of the Great Goddess Kali is the one in which she is represented on a throne of gold, supported by five bodies (such as that of Shiva), a throne which is in the middle of a tree grove made of gems. A beach with golden sand lies at her feet, always washed by the peaceful waves of the Nectar Ocean of Immortality.. 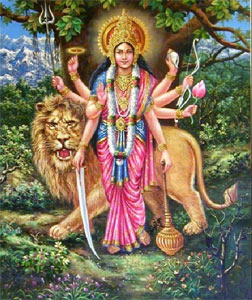 Kali is also called Adyashakti, in her aspect of terrible energy and power that impulses human beings into action and the world (Creation) to manifestation. For this reason she is often also called Mahamaya (the great Power of the Universal Illusion). The fact that she is represented naked without any garment that covers her, signifies Kali transcended any type of limitation, she being always identified with the endless Power of the Divine consciousness. Kali’s action in Manifestation involves the destroying and at the same time purifying action of time (Kala). This aspect is suggested by a decapitated head of a human being, that the Great Goddess holds in one of her hands, the significance being that the entire creation, is finally dissolved or revoked in the bosom of the Primordial Consciousness of God, because of the inexorable action of the subtle energy of time manifested by Kali, she herself being beyond time. This is the reason that the goddess is assigned also the name of Mahakali. However, as a yogi aims more and more firmly towards the goal of spiritual liberation, that transcends any duality and illusion, Kali will offer him her overwhelming grace (bhukti – the experience full of happiness and fulfillment in this world and mukti – the divine bliss of the Transcendent Divine Reality).

One of the most important aspects in which the Great Cosmic Power Kali is worshipped is that of the goddess Durga, the defeater of the demon Mahishashura. This demon represents in the tradition of the Hindu spirituality the incarnation of all the forces of Darkness. In the Vedanta philosophy there is the concept of the Divine Reincarnations (avatara) that come to Earth in order to achieve a profound spiritual transformation of humanity; in this direction, Rama, Krishna etc. were considered avatars of the Master of the Universe (Ishvara, adored in his male aspect as Vishnu). But for those who love God in his aspect of a caring omnipotent Divine Mother, the great Goddess is the only incarnation to destroy the evil that proliferates in the world under its various demonic and satanic aspects. Thus, in the tradition of Hindu Mythology it is said that the invincible goddess, omnipotent in the three worlds (physical, subtle and causal), came out victorious in the battle with demons and their king, the great demon Mahishashura, saving thus the gods from captivity and restoring the order in Manifestation. The deep spiritual significance of this myth is that in every human being there are beneficial and malefic forces and energies, which are acknowledged in this way. Symbolically, the malefic forces are the demons, and the benefic ones are the gods, so there is a fierce internal battle for supremacy. The goddess Durga, personification of the Great Cosmic Power Kali, grants her grace and divine help to those who invoke and adore her powerfully so that their spiritual forces develop and suppress all the other negative influences of their psyche and mental. Durga, the Divine Light which eternally sparkles as a Lighthouse of Eternity, destroys and burns in the terrible fire of her pure consciousness any malevolent force and any residue of ignorance.

In Hindu iconography, Kali appears as well in multiple other forms, which are often similar to the form of Dakshina Kali, the differences involving the number of arms, of the face of the goddess or of the symbolic objects which she holds in her hands. Thus, Shmasana Kali, Siddha Kali, Mahakali, Guhya Kali are all aspects of the Great Goddess who are revered in various parts of India..

Among these forms of the Great Cosmic Power Kali it is worthy to note that of Bhadra Kali, which in the famous treatise Tantrasara is described as a hungry deity, ready to devour every illusory form or aspect of Manifestation, having three eyes (symbol of complete spiritual knowledge) and four hands in which she holds a skull, a drum, a trident and an axe. A variant of Bhadra Kali is Chamunda Kali described as having a pleasant and benevolent appearance, although her teeth are terrible at sight. She wears a long human bone, with a skull in the end, and a sword in her both right hands, and in her two left hands she hold a noose and a human head. Unlike other representative forms, Chamunda Kali wears a tiger fur on her body and sits on a corpse.

At certain times and circumstances, Kali interferes in a terrible way to destroy everything that is weak, useless or perverted. She often assumes symbolically four or more hands to hold and use various objects and weapons in order to maintain the order in Creation and the control over the malefic forces embodied by certain demonic and satanic entities (yaksha, rakshasa, naga, bhuta, etc.). In her highly elevated aspects, Kali is the very endless Divine Bliss which lies beyond any ability of common human perception.

Facial recognition on Facebook: another alarming step towards global surveillance

The posture of the bow

Hymns of praise dedicated to the Great Cosmic Power KALI