Sadhana, or the spiritual practice with regard to the Great Cosmic Power Kali, involves the spiritual effort to purify and energize the subtle centers of force of the aspirant to the highest degree and also to achieve at the same time the glorious awakening and ascension of Consciousness and Divine Energy, located at the level of Muladhara Chakra as Kundalini Shakti. The ascent of Kundalini Shakti is also one of the most important aspects of the sphere of influence and manifestation of the gigantic sphere of cosmic consciousness of Kali in the worshiper’s being, being directly linked to the practice of making love with transfiguration and continence, in full conformity with the principles and ideas of the tantric system doctrine.

Sadhana (the specific spiritual practice) of adoring the Great Cosmic Power Kali is undoubtedly one of the most novel ways of spiritual adoration, which is in particular specific to the typology of the spiritual hero. Full of courage and fearless in front of the terrible shapes that Kali takes in front of him (testing thus his audacity, determination, patience, perseverance and spiritual maturity), the adept that becomes stronger in this way in the purifying fire of the sublime spiritual experience, has within the shortest time (and sometimes even instantly) access to the transcendent condition of the Absolute Divine Consciousness, which is God the Father himself.

Because for most of the worshippers the subtle aspects of the goddess Kali (and, generally speaking, of any other deity) cannot be perceived directly by an inward vivid transfiguring emotion (bhavana), it is necessary for the deity image to be placed in front of the adorer in the form of a statue or even a drawing (photo) that is well realized. Although this method may seem like an extreme form of adoration (upasana), it can create, in the depths of the adorer’s heart, the resonance of state which is specific to the adoration of that deity. The lowest form of adoring is a three dimensional image (murti)  of the goddess (the statue of Kali or of any other Mahavidya), then the so-called emblems (salagrama shila) of virtues, which are represented by some black stones with intricate designs, and, then, at a higher level there is the way of adoring the goddess through her specific yantra.

The special Yantra or, in other words, the sacred geometrical shape to evoke (resonance) with Kali is composed of a series of five equilateral triangles placed one inside the others and placed on the circle of a lotus with eight petals. The five triangles pointing downwards of Kali’s yantra actually symbolize both the transcendence of the five senses, and of the five elements (tattva-s). The lotus in the form of a circle with eight petals indicates that the goddess Kali can be correctly understood and perceived by focusing our elevated emotions in the secondary centre Hrid Chakra or at best in Anahata Chakra. In the centre of this yantra we should visualize a little point, symbolizing the full stability of our consciousness. The Yantra of Mother Kali is a powerful symbol for mental concentration and meditation and it can also be used as a protective talisman. Find here the Yantra of the Great Cosmic Power Kali.

Finally, the most elevated form of adoration is the use of that goddess (in our case it is the bija mantra of the Great Cosmic Power Kali) mantra (or bija mantra) that can be integrated in the technique of japa (out loud, whispered or mental repetition of the mantra that corresponds to that deity) or the more complex technique and more nuanced as effects, the laya yoga meditation technique. We also have to mention the fact that when adoring the image (murti) of the goddess, the adorer’s mind gradually tends to identify with the shape of that Great Cosmic Power (Kali), at which point the perception of the material image is no longer related to a simple exterior object, but it is replaced with the actual perception of the divine power of the goddess which is evoked with fervor and which is in this way made to “descend” at the level of the statue or image. Other ritual elements of an adoring consist of the prostration full of love in front of the deity’s image, in offering flowers, fresh fruits or other products of a pure quality, in burning of incense, etc.

Nyasa
is also an important aspect of adoration. This action (nyasa) involves placing the adorer’s hands, palms and fingers on different parts of his body, simultaneously with the mental repetition of the mantra-s specific for those areas, and using the creative imagination he realizes thus the identification of the various parts of the deity body with the parts of his own body. The ritual ends with a specific movement of the hand that “diffuses” the subtle energy of the goddess within the adorer’s whole body.

Kali is always ready to answer to those who evoke her through the worship of her perfect qualities, through mental repetition of her mantra-s, and by the visualization of her yantra and of her many sacred traditional forms. Kali conveys much love when the passionate impulse of sincere desire to unite with her gives birth to an effervescent vitality, through which, the one who adores her falls and then rises through the Great Axis, which is the central channel of the subtle body, Sushumna Nadi. She is also instantly thrilled at the ecstatic amorous experiences of a man and a woman in their endless sexual tantric union (with continence). Kali offers us her immense happiness whenever we remember of her. Kali is felt as an oceanic ecstasy when she frantically evoked as being together with Shiva. 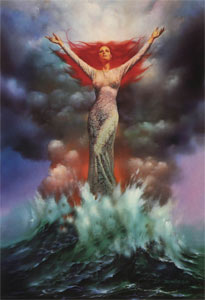 She can be worshiped by offering (consecrating) her anything with love, but without hypocrisy. It is very easy to evoke her by means of her sensual smells of sandalwood, musk, patchouli and camphor. She also likes garlands of red flowers, the rhythmic love music and a profoundly transfiguring sensual dance. Kali responds with joy at spontaneous laughter, emotional songs of love, passionate love and to the mental attitude of “all or nothing”.

A beautiful, sensual and vital woman can quickly become one with Kali identifying deeply and widely with her terrible power that is obtained through the mysterious initiation in her sphere of force. So, she will get in ineffable resonance with this Great Cosmic Power Kali. When the hypocrisy, self-doubt, selfishness and jealousy are almost completely removed from the soul of a woman, the deep intuitive wisdom of Kali, giving bliss and harmony, powerfully comes to light. Full of an effervescent amorous vitality and sexual energy, giving divine wisdom and discriminatory power, Kali then acts permanently as a very strong initiator in the ineffable nature of reality. For a woman who truly feels her, Kali is fearless and passionate; once you have obtained the grace of this Great Cosmic Power, she will never withdraw it. In her role as Kali, the woman acts as the destroyer of illusion and as the one who spontaneously fulfills the most intimate desires of the one who adores her.

Hymns of praise dedicated to the Great Cosmic Power KALI