Breathing in toxic fumes from polluted air is one of the major contributors to premature death around the globe as it can exacerbate lung and heart conditions. But despite the emerging threat of air pollution to humans, little research has been done on its impact on the health of animals. 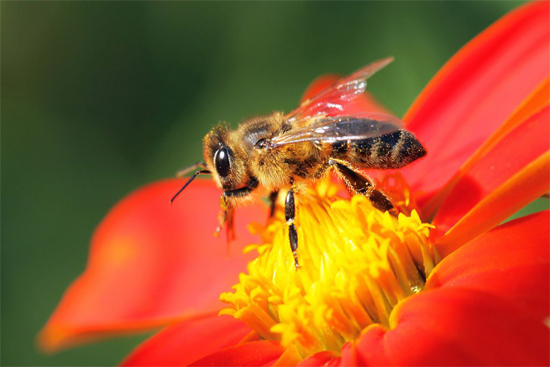 In one of the first major efforts to understand the impact of air pollution on animals, scientists from India’s National Centre for Biological Sciences (NCBS) in Bangalore found that polluted air could be detrimental for some of the most important organisms to agriculture: bees.

In particular, the scientists found traces of toxic metals like lead, tungsten and arsenic on the bodies of bees collected from different locations in Bangalore, one of the largest megacities in India and one of most polluted cities around the globe.

Information from gene sequencing also indicated that exposure to polluted air affected the expression of all 14 genes responsible for stress and 60 percent of the bees’ lipid metabolism-related genes. Bees collected from the most polluted locations also had irregular heart rates and poor immune health, and most of them died soon after capture.

Rapid urbanization, intense agriculture and poor emission control all contribute to immense increases in air pollution in India’s largest cities. In fact, India dominates the list of the most polluted cities on Earth, placing nine cities on a list of 10.

In spite of that, the impact of air pollution on the flora and fauna in these polluted cities remains to be studied further despite being a pressing concern. For instance, scientists found alarming declines in population trends of Apis dorsata, or the giant honey bee in India.

Experts suspect that particulate matter in the air could be affecting the pollinators and causing their declining populations. To determine if this is so, scientists from NCBS collected and examined bees from four different locations in Bangalore over a period of three years. Each site had notably different standards of air pollution.

The scientists found that bees from the northern region of Bangalore had copious amounts of pollen on their bodies. Bees collected from an industrial location, on the other hand, had traces of lead, tungsten, arsenic and a host of other toxic metals on their bodies.

Because the scientists could not isolate or pinpoint the exact effect of air pollution on the bees, the group repeated the experiment using fruit flies. The group placed cages of fruit flies at the same sites as the bees. To no surprise, the flies also came back coated in pollutants, and those placed in the more polluted areas exhibited greater signs of stress and died faster.

Taken together, the results of both experiments indicate that particulate matter can, in fact, cause significant changes in insects’ gene expression, immune health and metabolism. The scientists recommend further controlled exposure studies in order to determine the components of particulate matter causing the changes.

Bees enact important roles in agriculture, and their deaths could spell food shortage for humans and the decline or total extinction of certain plant populations. India, for instance, being the largest fruit producer, could face serious food production problems and great economic loss should pollinator populations continue to decline due to air pollution.

Experts have also expressed grave concern that air pollution poses the greatest threat to wild bees, which are responsible for pollinating 85 percent of flowering species. Wild bee colonies do not migrate as often between habitats like A. dorsata and, as such, are exposed to air pollution on the regular.

Bees also face serious health risks from exposure to harmful pesticides, and exposure to both air pollution and pesticides combined might be lethal for bees and other insect populations.

Experts have since been attempting to come up with various approaches to protect bees and promote the growth of their populations. England’s Coventry University, for instance, plans to launch a citizen science project in collaboration with beekeepers to map the presence of particulate matter in the air around colonies. Experts hope that this could shed light on the extent of pollution in the UK and its effects on wild bee populations there.

Breaking the Covid Trance: How the (Irish) people were psychologically manipulated (V)