After the Asian secret societies targeted the Western criminal elite, a total storm broke out among secret societies. Many of these societies have operated over millennia and mostly remained dormant. Now they all sprang to life and mobilized their members. I experienced this firsthand, as their members approached me or aimed to destroy me. 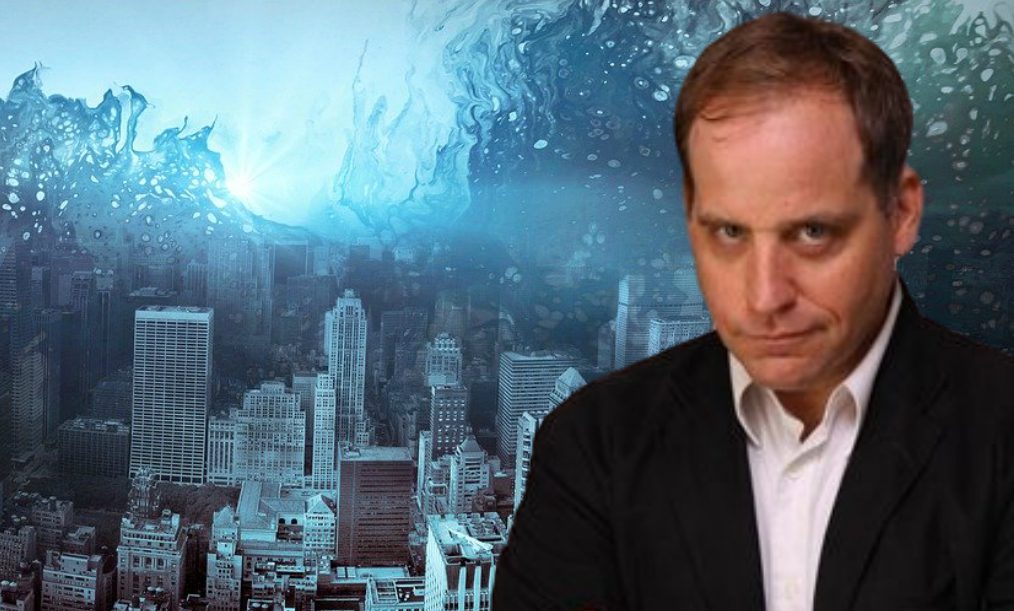 The real trigger for this was an interview I had with David Rockefeller in late 2007. Rockefeller had arrived in Japan to promote a Japanese language version of his autobiography. As a part of this promotion, some men in black arrived at a large bookstore and closed off all the exits before Rockefeller appeared and made himself available to sign his book. Somebody took a photo of this event and sent it to me with the note “Rockefeller is in town.”

As a long-term foreign correspondent in Japan, I knew big wigs like him typically stayed at the Hotel Okura across the street from the U.S. embassy. So, I waited until 10 PM, when I figured his handlers would have left the room but he was still awake, called the switchboard and asked for David Rockefeller. I was put straight in touch with him. I told him who I was and my background, and asked him for an interview. He agreed.

This interview took place the following morning. However, the fact that I was able to directly contact the head of the Bilderberg, Council on Foreign Relations and Trilateral Commission shortly after the Asian societies threatened the members of these groups let the world know this was the real deal.

The “Elders of Zion,” i.e. the Rothschilds and their lackeys, sent Michael Greenberg, the key man they used to control Japanese politicians to visit the Asian secret society bosses in Japan. Greenberg told them I was a woman-beating, amphetamines addict and that they should have me killed. When the Asians confronted me with this I suggested they ask my ex-wife or any other woman I had been intimate with to confirm this was complete slander.

This was the first hint they were planning to use drugs to destroy me. It was around this time that Sasha Zaric, aka Alexander Romanov, approached me. Zaric said he was sent by a group known as the Gnostic Illuminati. He said they traced their roots back at least as far as the Greek Mathematician Pythagoras.

The Gnostic Illuminati said they scouted the top 6,000 geniuses of each age and that they were opposed to bloodline rule. They claim to have caused the American, French and Russian revolutions.

Zaric told me he made his living as a drug smuggler, typically bringing about 100 kilograms of hashish into Japan every month. He said he had been called to Pattaya, Thailand where he was shown a 500-megaton nuclear weapon that he was told was one of four that had been stolen from the Russian submarine Kursk when it was sunk in the year 2000. He was also shown 70 kilograms of marijuana and told to smuggle the drugs into Japan.

Zaric presented me with some of the marijuana and said that if I did not introduce him to Japanese gangsters I would be killed. He said if I made the introduction I would be given $10,000 per month as a commission. I told Kawase Takamasa of the Japanese military police about this. He told me it was a trap and to stay away from it. He was right. It was around this time that, according to my MI6 sources, former Prime Minister Tony Blair of the UK was bragging that I was about to be jailed on drug charges. The marijuana was also laced with a dangerous chemical, most probably PCP or “angel dust.”

Zaric began to lose his mind after he started smoking it heavily. However, it turns out he was also an agent for the Australian Secret Intelligence Service. Around 2010, he told me the nuclear weapon he had been shown in Thailand had been smuggled into Japan and was located at Hinode, Tokyo on the property of former Japanese Prime Minister Yasuhiro Nakasone. Zaric became a whistleblower and went to the Australian Embassy in Tokyo to raise the alarm, warning Japan was about to be hit with a nuclear terrorist attack. Rudd apparently tried to act on this information and was forced to resign as Prime Minister “by the Federal Reserve Board,” according to ASIS sources.

We will get back to this nuclear weapon in another report, but first, we need to take a look at what occurred to the Asian Secret Society people I first met. After the cutoff of Asian money had caused the Lehman crisis and a sudden economic collapse in the West, the Asian secret society cut a deal behind my back with the Rockefellers and Bushes. They were told that Barack Obama, a black person, would be made president of the United States and that everything would suffer modifications. For this reason, a secret deal was cut whereby the FRB bought 700 tons of gold from an Asian royal by the name of Yohannes Riyadi. Lord James Blackheath detailed this to the British House of Lords.

Based on information from Lord Blackheath and others, what occurred was the 700 tons of gold were used to issue 750,000 tons worth of gold-backed bonds by Alan Greenspan of the Federal Reserve Bank. This created US $23 trillion that was used to finance the Obama regime. The Chinese were awarded the 2008 Beijing Olympics and many officials were given Iraqi oil money as a part of their reward for going along with this scam.

It was also around this time that the Asian secret society representatives withdrew their protection from me for “disobedience.” The Ninja Shiramine then told me I was about to be killed. My senior contact with the Japanese Yakuza gangs also told me that I was officially sanctioned and designated to be killed. That is why I was forced to go to the headquarters of Japan’s largest Yakuza gang, the Yamaguchi-Gumi, and use a megaphone (and an incriminating set of insurance files) to convince them to provide me with protection.

It was also around this time that Leo Zagami showed up in Japan to visit me. Zagami also said he represented the Illuminati. However, his version of the Illuminati was the descendants of the Roman emperors. He said they traced their roots back to 26,000 years ago and that they had access to ancient technology held by survivors of the great post-glacial floods of 14,000 years ago. There is a lot more to this but basically, he told me they gave orders to the Mafia and the Vatican. He proved this by saying they were going to fire Pope Maledict (Benedict XVI) and Italian Prime Minister Silvio Berlusconi, which subsequently occurred.

I was then invited to visit the P2 Freemasons in Italy. Here I met a lot of politicians, academics, mafia types etc. I was also shown technology that allowed them to project images into the sky that were 25-miles wide (Project Blue Beam).

Zagami then sent me to Milan to meet Vincenzo Mazzara, a Cavalier of the Teutonic Knights and the highest-level connection Zagami had. When Mazzara met me, he asked if he could smoke a cigar. He then spent the day blowing smoke from his cigar at me.

In any case, he took me to the cathedral in Milan where he showed me a stained glass window representing the Black Sun. He also showed me a carving of a cross with a serpent winding around it. He said these were their gods and they gave them instructions by “contacting them via gamma waves.” Please understand I am just quoting them and not saying I believe what they told me was true. What I do know is that night, my lungs seized up and I nearly died. However, I survived, and the next morning when I called Mazzara to ask why he had not come to meet me, he sounded surprised and blurted out “you’re still alive!?”

I returned to Japan sick as a dog but recovered. It was shortly after this visit that the infamous Chiasso incident took place on June 3rd, 2009. In this incident bonds worth $134.5 billion, were stolen from two Japanese “diplomats,” or representatives for the Dragon Family, Akihiko ‘Yamaguchi’ and Mitsuyoshi Watanabe.

I met both Watanabe and Yamaguchi later. Watanabe told me he had been sent by the Emperor of Japan to cash the bonds in order to finance a tunnel linking Japan and Korea. Yamaguchi said he took his bonds from a batch the former U.S. Vice President Dick Cheney said were real. Yamaguchi wanted to put them into a “trading program,” to finance charitable activities.

In any case, the Italian financial police handed the seized bonds to Neil Keenan who apparently ran the Eastern European branch of the CIA. Keenan then handed them to a Vatican banker by the name of Daniel Dal Bosco. Dal Bosco took the bonds to the Chinese Communist Party and to the Finance Committee of the U.S. Senate, to no avail.

It was then that UN Secretary-General Ban Ki-Moon came forward and offered Dal Bosco $100 million to “make the whole thing go away.” The bonds were eventually returned to Keenan who was killed a couple of years later and replaced with an impostor. A representative of the Dragon family (Asian royals) later explained that Keenan had never been authorized to cash those bonds.

It is also interesting to note that on June 6th, 2009, three days after the Chiasso incident, I was stabbed with a poison needle in front of multiple witnesses by a North Korean agent by the name of Okubo Mutsuaki. Despite this, the Japanese police refused to investigate and my colleagues at the Foreign Correspondent’s Club of Japan refused to let me talk about it in front of the Western press.

I survived because friends of my murdered colleague Christopher Story, aka Edward Harle, advised me that if I took one gram of Vitamin C every six hours and 5,000 international units of Vitamin D every day, I could counteract the effects of the poison.

I survived only to be given a blow-by-blow account in real-time of how the nuclear weapon was stolen from the Kursk and used to trigger the March 11, 2011, Fukushima nuclear and tsunami mass murder attack. It was this attack and the subsequent threats to sink Japan under the sea that finally made me realize we really were dealing with mass-murdering psychopaths at the highest levels of world power.

A narrative between covid-flu RNA vaccine combo and human transmissible vaccines, in…

Globalist banker predicted scamdemic and genocide of the useless