It’s widely known that drinking cranberry juice is helpful for urinary tract infections, but have you ever wondered why this is so? Folk remedies are increasingly validated by science, and so it is that cranberries really are great for infections – and that’s the just the beginning of the storied benefits of this tart, little berry. 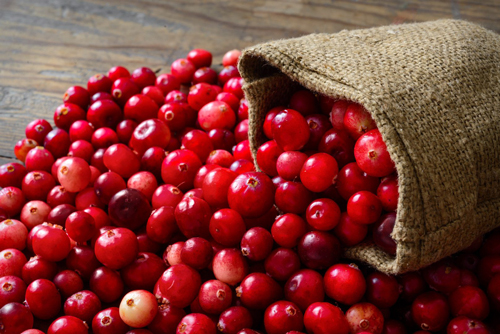 Cranberries are the small, red fruits of the Vaccinium oxycoccus plant, which grows as short evergreen bushes or trailing vines (American Cranberry, Vaccinium macrocarpon) throughout a relatively narrow band of the cooler Northern Hemisphere. In the same plant family as the blueberry and lingonberry, cranberries provide the expected nutritional boost of a super fruit, and yes – cranberry juice is great for urinary tract infections. But there is more to this berry than traditional home remedies suggest. Cranberries pack an array of therapeutic benefits that most people have never heard about.

While popular in North America, it is rare to encounter cranberries in the raw. Found in sauces, jams, and commercial juice drinks, their tart acidity countered by heaps of added sugar to render them palatable to average tastes. But it’s this distinctive bitterness that belies the fruit’s medicinal potency. Cranberries are rich in antioxidant compounds associated with bitter taste called polyphenols. Polyphenols are an important class of plant-based nutrient that deliver dynamic health benefits. A specific polyphenol found in cranberries called Proanthocyanidins, or PACs, has been shown to have an inhibitory effect on bacterium such as Escherichia coli, responsible for causing urinary tract infections. Although their action is not fully understood, PACs protect tissues by preventing E. coli from attaching to the lining of the urinary tract. The Cranberry Institute recommends drinking 8-16 ounces of cranberry juice each day as a preventative, especially if you are prone to urinary tract infections.

What other ailments are cranberries good for? Let’s explore the science around this super fruit to learn what researchers have discovered.

Greenmedinfo’s research database has 75 abstracts that demonstrate many life-enhancing properties of cranberries. A meta-analysis of this research reveals more than a dozen unique therapeutic actions, however there are distinct effect categories that appear: antioxidant, antiviral, antibacterial, and anticancer.

The well-known health benefits of a diet rich in fruits and vegetables have brought antioxidants into public awareness. Fruits like cranberries and blueberries have more antioxidants pound-for-pound than most foods on the planet. Antioxidants support good health by eliminating free radicals from the bloodstream, where these unstable molecules wreak havoc on cellular functions. Many experts believe that the damage wrought by free radicals can lead to diseases like heart disease, cancer, and dementia. The more antioxidants in the diet, the more immune a person becomes to the damaging effects of these roving radicals. A 2005 study on supplementation with fruit and vegetable-derived polyphenols found that these extracts can reduce age-related declines in learning, memory, motor performance, and nerve signaling. Researchers further found that the polyphenols in cranberries can improve muscle tone, strength, and balance in aging rats, as well as restore the brain’s ability to generate a neuroprotective response to stress. While other fruits like blueberries are also high in polyphenols, cranberries were found to have the highest antioxidant activity of other fruits studied, such as pineapples, lemons, and grapefruits.

Antioxidant foods have a powerful effect on blood lipid profiles, making them a useful adjunct preventative against atherosclerosis, or hardening of the arteries. In a 6-week dietary trial, rats fed a powdered cranberry supplement demonstrated significantly increased HDL-cholesterol levels (so-called “good” cholesterol), suggesting that dried cranberry powder might have a beneficial effect on serum lipids, as well as a protective effect against protein and lipid oxidation. In much the same way that cranberries can promote healthy urine flow, cranberry juice has been shown to improve blood flow and vascular function in subjects with coronary artery disease. After just 16 ounces of juice, researchers observed improved brachial artery flow and improvements in vascular stiffness, suggesting an acute benefit to patients with cardiovascular disease.

One of the tell-tale signs of oxidative stress in the body is inflammation. A 2016 animal study sought to compare the anti-inflammatory and antioxidant effects of cranberry, blueberry, and goji berry extracts. Researchers concluded that all three berries possess antioxidant and anti-inflammatory effects, but they exert these effects through different mechanisms. Each berry imparts unique benefits, so even if you already consume a diet rich in other fruits, you can reap added benefit by the inclusion of fresh cranberries. 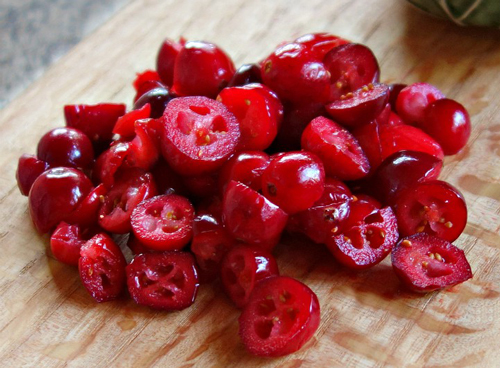 The abundance of beneficial phytochemicals in cranberry and other berries, has been credited for their numerous health benefits, such as their ability to boost natural immunity. One of the most studied and important of these phytochemicals are flavonoids. Flavonoids and their subset, bioflavonoids, have been shown to possess a spectrum of antiviral activity against certain viruses, inhibiting infectivity and/or replication of the virus. Cranberry juice was tested for its ability to inhibit the adhesion of influenza virus to cells, thus decreasing infectivity. The 2005 study tested two strains of influenza virus and found that the more times the extract was introduced to cells in vitro, the more inhibitory effect was observed, leading researchers to conclude that cranberry juice and extracts of relevant polyphenolic compounds may have a therapeutic potential against influenza virus.

In 2016, these same properties were explored for effectiveness at preventing herpes infections. Using a cranberry extract containing high levels of A-type proanthocyanidin, researchers observed two distinct beneficial antiviral effects against herpes simplex type 1 (HSV-1) and type 2 (HSV-2) viruses: adsorption of the virus by target cells was prevented, and Type-A PACs targeted specific viral glycoproteins, resulting in loss of infectivity of HSV particles. These exciting results could pave the way for the development of natural microbicides containing cranberry’s polyphenolic compounds, that may one day prevent HSV infections.

In Japan, where many types of berries are grown, researchers sought to determine if specific berries have greater antiviral effects than other varieties, and if this effect is due to varying polyphenol content. In the 2013 study, thirty-five varieties of blueberry were compared with bilberry, black currant, and cranberry, rating their relative effectiveness against the influenza virus. Antiviral effects differed markedly between berry species, with bilberry, cranberry and blackcurrant having the greatest antiviral effects. Researchers found that a positive relationship between antiviral effect and total polyphenol content does exist, confirming that polyphenols are at least in-part responsible for the antiviral properties of berries.

Bacteria and inflammation play causal roles in most periodontal diseases. When a pathological condition exists in the mouth, enzymes called Matrix Metalloproteinases (MMPs) are secreted in a type of inflammatory-disaster response. MMPs are responsible for oral tissue degradation, and are associated with dental caries and cancers of the mouth. In 2009, a study was undertaken to see if A-type cranberry proanthocyanidins may be useful in inhibiting the secretion of MMPs in patients with periodontitis. Researchers found that specified doses of cranberry’s Type-A PACs were effective at inhibiting MMPs, both in production of these enzymes and their catalytic activity. Further studies have been conducted that show the promise of these unique polyphenols for the prevention and treatment of tooth decay and periodontal disease. 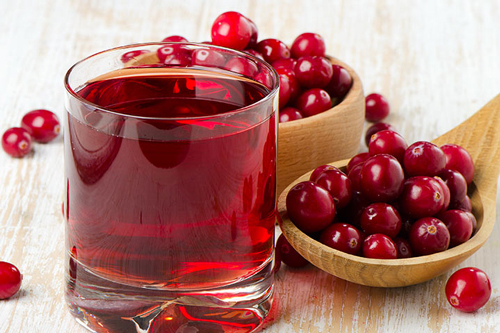 For all the amazing benefits of cranberries, perhaps their most promising potential lies in the field of cancer prevention and treatment. The polyphenolic extracts derived from cranberries have been shown to inhibit the growth and development of cancers of the breast, colon, prostate, lung, and other tumors. Researchers believe the unique combination of phytochemicals in cranberries may be what contributes their chemoprotective mechanisms, such as apoptosis (cell death) in tumor cells, and inhibition of inflammatory enzymes. In a 2015 study, researchers isolated cranberry flavonoids to their highest level of purity, and tested their effect in vitro against ovarian cancer cells. The cranberry flavonoids induced cancer cell death, as well as decreased enzymatic activity, deactivating pathways of progression and arresting development of new cancer cells. An earlier in vitro study foreshadowed these results using berry juices to induce apoptosis in human cancer cells.

Research into these potentials is ongoing, with exciting results being amassed on more than a dozen different cancers. In a study released in 2016, a “cranberry intervention” was carried out with patients diagnosed with prostate cancer. Inspired by positive results in non-cancer patients, researchers hoped to see a reduction in serum prostate-specific antigen (PSA) in cancer patients about to undergo radical prostatectomy. Selected blood and urine markers, as well as total phenolics in urine, were measured at baseline and on the day of surgery for test and placebo groups. Results showed a significant decrease in serum PSA – 22.5%, in the group consuming cranberry powder. Researchers concluded that daily consumption of a powdered cranberry supplement may lower serum PSA in patients with prostate cancer, and the whole fruit contains constituents that may regulate cancer-gene expression.

One of the most comprehensive studies to date on the inhibitory effects of cranberries on cancer is the meta-analysis published in 2016 called Cranberries and Cancer: An Update of Preclinical Studies Evaluating the Cancer Inhibitory Potential of Cranberry and Cranberry Derived Constituents. The cross-functional team of scientists reviewed cranberry research focused on cancer and found that studies performed utilizing a variety of in vitro techniques demonstrated “positive effects against 17 different cancers,” whereas in vivo studies “supported the inhibitory action of cranberries toward cancers of the esophagus, stomach, colon, bladder, prostate, glioblastoma and lymphoma.” The study found that cranberries induced cancer cell death in a variety of ways, including apoptosis, necrosis, and autophagy. Cranberries and cranberry-derived extracts reduced cancer cell proliferation, modified cell signaling away from new cancer cell production, and decreased markers of oxidative stress. The data presented in this meta-analysis strongly supports the potential of cranberries as a possible adjunct in the prevention and treatment of a multitude of cancer-types.

Let’s enjoy the panacea of health benefits that are packed in this super fruit!

18 Rules of Living by the Dalai Lama