Biometric Scanning Has Rolled Out In Atlanta International Airport: ‘One Look and You’re In’ 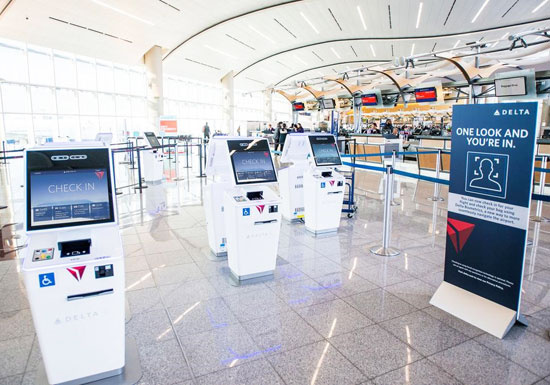 Atlanta airport’s Terminal F has become the “first biometric terminal” in the United States. And Detroit is next…

As of December 1 (2018), Delta Airlines rolled out biometric scanning for air travel at the Hartsfield-Jackson Atlanta International Airport (ATL), Terminal F.
International passengers will be able to use facial recognition scans from “curb to gate” to get through every facet of their air travel. While the face scans are lauded as a great way to save time, they really aren’t, as you’ll see later in this article.

Any travel-weary person can think of many ways that air travel could become more convenient and efficient. One of the strangest paradoxes of our technologically advanced world is that it’s 2019 and air travel is the most miserable experience. It becomes more miserable every year and no one even wants to hear comedians talk about it anymore because miserable air travel is such a foregone conclusion.

Yet people have already lined up before the biometric scanners like sheep, seemingly without even flinching at the new development. Or rather, more like deer in the headlights. Nothing new here… just your friendly neighborhood facial scans.

Biometric Scanners Are Optional… For Now

For now, the biometric scanners are being presented as an “option”. Delta et al. call it an option any time they reference biometric scanning perhaps to soften the edges a bit. Of course, in time this will be the only option for air travel and Delta is in a hurry to roll out the scanners at the other international airports.
But please don’t believe the tripe about how this is all for everyone’s convenience. It clearly isn’t when you see who Delta partnered with to make biometric scanners a reality.

This means that customers flying direct to an international destination on Delta, Aeromexico, Air France, KLM or Virgin Atlantic Airways can use facial recognition technology from curb to gate, including to:

– Check in at the self-service kiosks in the International lobby;

– Drop checked baggage at the counters in the International lobby;

– Serve as identification at the TSA checkpoint;

– Board a flight at any gate in Terminal F;

– And, go through CBP processing for international travelers arriving into the U.S.

We’re removing the need for a customer checking a bag to present their passport up to four times per departure – which means we’re giving customers the option of moving through the airport with one less thing to worry about, while empowering our employees with more time for meaningful interactions with customers.

How Does Biometric Scanning Work At The Airport? 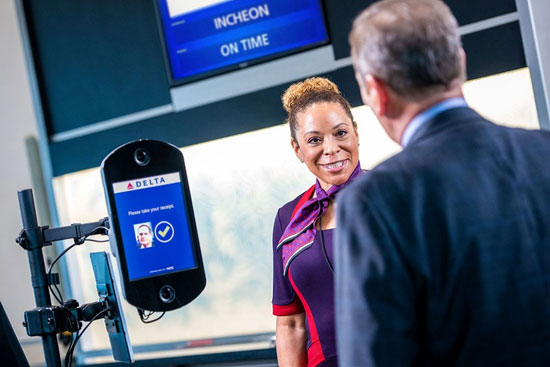 USA Today writes: “Delta says customers enter their passport information during online check-in. Or, at the airport, customers can scan their passport to check in. Next, passengers can click ‘look’ as they check in at one of Delta’s automated kiosks. Travelers’ face scans will be matched to passport or visa photos on file with U.S. Customs and Border Protection. Delta says customers have the same option as they ‘approach the camera at the counter in the lobby, the TSA checkpoint or when boarding at the gate’.”

The mainstream media is giddy for the new, invasive advancements all for a little more ‘convenience’ that could exist with a little more efficiency like in other countries’ international flights.
The MSM certainly isn’t emphasizing any critiques if there are any.
“It is a great honor for Detroit Metropolitan Airport to become one of the nation’s first biometric terminals” gushed Chad Newton, the interim CEO of the Wayne County Airport Authority of the Detroit airport. “We look forward to partnering with Delta, CBP, and TSA to provide passengers with the option to utilize facial recognition throughout their entire travel process.”

The “option” – while it is still an option and not mandatory – will become available to international passengers flying nonstop from Atlanta on Delta’s partner airlines Aeromexico, Air France-KLM or Virgin Atlantic.

They Really Want You To Feel That Facial Recognition Is Good

“Nearly all 25,000 customers who travel through ATL Terminal F each week are choosing this optional process, with less than 2 percent opting out”, Delta beamed.
“And, based on initial data, the facial recognition option is saving an average of two seconds for each customer at boarding, or nine minutes when boarding a widebody aircraft”, they added.

Wow, did you read that? You are saving two whole seconds at boarding…
Delta will also introduce this “curb to gate” biometric option in Detroit early this year.

What Can We Do To Avoid Biometric Scanners At The Airport?

Unfortunately, facial recognition is not something most people can control anymore. It happens online, via our passports and through Big Brother cameras posted in the public. Tighter security measures make it more difficult to wear things that obscure your face when you go through the airport or into the bank or stores etc…

But you can refuse to travel Delta and let representatives know that you won’t be voting for them if they continue evaporating your right to privacy.
In the long run, this is what we are looking at as the new “normal”.
However, if your money still counts, why not choose a different international airline.

“Don’t just fly, fly better” says the slogan of Emirates Airline. Meanwhile, there’s one of you up in a Delta jet saying: “Fly better? Is that a thing that exists? You mean I don’t have to sit on this person’s lap and get sneezed on and beg for more pretzels? I’d get free drinks and complimentary food? And hot towels?”
Yes… This thing does exist. And anyone who has flown internationally knows that the airport experiences there are worlds different than the U.S. In some airports, if you start taking off your belt and shoes and you might be stopped for indecent exposure!

U.S. airlines should be ashamed, but the miserable, smelly air travel experience seems to be part of a bigger plan to crimp the freedom to travel.