In recent years, gene therapy has received considerable interest as a potential method for the treatment of numerous inherited and acquired diseases. However, successes have so far been hampered by several limitations, including safety issues of viral-based nucleic acid vectors and poor in vivo efficiency of nonviral vectors. 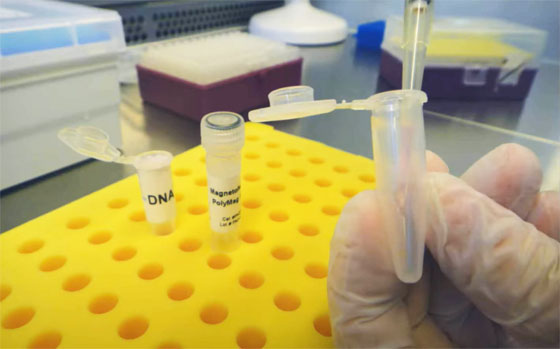 Magnetofection™ has been introduced as a powerful tool to deliver genetic material into cells. This technology is defined as the delivery of nucleic acids, either ‘naked’ or packaged (as complexes with lipids or polymers, and viruses) using magnetic nanoparticles under the guidance of an external magnetic field.

Magnetofection™ is a novel, simple and highly efficient transfection method. Inspired by the validated and recognized magnetic drug targeting technology, this original method is a revolution for transfection and infection. In essence, the idea was to unite the advantages of the popular biochemical (cationic lipids or polymers) and physical (electroporation, gene gun) transfection methods in one system while excluding their inconveniences (low efficiency, toxicity, difficulty to handle). It is the unique technology suitable for viral and non viral gene delivery applications.

Magnetofection™ principle is to associate nucleic acids, transfection reagents or viruses with specific magnetic nanoparticles. The resulting molecular complexes are then concentrated and transported into cells supported by an appropriate magnetic field. In this way, the exploitation of a magnetic force exerted upon gene vectors allows a very rapid concentration of the entire applied vector dose on cells, so that 100% of the cells get in contact with a significant vector dose, and promotes cellular uptake.

How does it work?

The magnetic nanoparticles are made of iron oxyde, which is fully biodegradable, coated with specific proprietary cationic molecules varying upon applications. Their association with the gene vectors (DNA, siRNA, ODN, virus, etc.) is achieved by salt-induced colloidal aggregation and electrostatic interaction. The magnetic particles are then concentrated onto cells by the influence of an external magnetic field generated by a specific magnetic plate. The cellular uptake of the genetic material is accomplished by endocytosis and pinocytosis, two natural biological processes. Consequently, membrane architecture and structure stay intact in contrast to other physical transfection methods that damage, create hole or electroshock the cell membranes. The nucleic acids are then released into the cytoplasm by different mechanisms depending upon the formulation used:

– First mechanism is the proton sponge effect caused by cationic polymers coated on the nanoparticles that promotes endosome osmotic swelling, disruption of the endosomal membrane and intracellular release of DNA.

– Second mechanism is the destabilization of the endosome by cationic lipids coated on the particles that release the nucleic acid into cells by flip-flop of cell negative lipids and charged neutralization.

– Third mechanism is the usual viral mechanism when virus is used.

What are the applications?

Magnetofection™ has been successfully tested on a broad range of cell lines, hard-to-transfect and primary cells. It is perfect for non-dividing or slowly dividing cells, meaning that the genetic materials can go to the nucleus without cell division. Combining magnetic nanoparticles to gene vectors of any kind results in a dramatic increase of uptake of these vectors and high transfection efficiency. It is the only technology suitable both for viruses and non-viral nucleic acid delivery applications.

It is needed specific equipments?

The only requirement for Magnetofection™ is a magnetic plate specifically designed for this application. The magnetic plate is a one-time buy and completely reusable, so it is not needed expensive equipment contrary to approaches such as electroporation or gene gun. Basically, the magnetic field required is produced by specific magnets. Three magnetic plates are available: Super Magnetic Plate, Magnetic Plate with 96 individuals magnets and Mega Magnetic Plate. Their design allows producing a heterogeneous magnetic field that magnetizes the nanoparticles in solution, forms a very strong gradient to attract the nanoparticles and covers all the surface of the plate. The plate can be washed with ethanol 70% and used within incubators or robots.

Inspired by the validated and recognized magnetic drug targeting technology, this innovative method is a revolution for transfection and infection.

Will humans still be humans?