Astronomers observed dozens of objects that “cannot be scientifically identified.”

The skies over Kyiv are swarming with unidentified flying objects (UFOs), according to a new report from the Main Astronomical Observatory of the National Academy of Sciences of Ukraine. 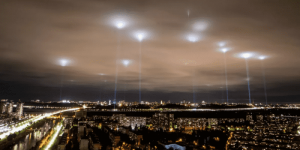 Of course, given that Russia and Ukraine have been locked in a months-long war that relies heavily on aircraft and drones, it’s likely that many of these so-called UFOs are military tools that appear too fleetingly to identify, a U.S. intelligence agency has speculated.

Published to the preprint database arXiv, the report — which has not yet been peer-reviewed — describes recent steps that Ukrainian astronomers have taken to monitor fast-moving, low-visibility objects in the daytime sky over Kyiv and the surrounding villages. Using specially calibrated cameras at two weather stations in Kyiv and Vinarivka, a village about 75 miles (120 kilometers) to the south, astronomers observed dozens of objects “that cannot scientifically be identified as known natural phenomena,” the report said.

Government agencies tend to refer to such objects as UAP, short for “unidentified aerial phenomena.”

“We observe a significant number of objects whose nature is not clear,” the team wrote. “We see them everywhere.”

The researchers divided their UAP observations into two categories: “cosmics” and “phantoms.” According to the report, cosmics are luminous objects that are brighter than the background sky. These objects are designated with birds’ names — such as “swift,” “falcon” and “eagle” — and have been observed flying solo as well as in “squadrons,” the team wrote.

Phantoms, by contrast, are dark objects, usually appearing “completely black,” as if absorbing all light falling onto them, the team added. By comparing observations from the two participating observatories, the researchers estimated that phantoms range from 10 to 40 feet (3 to 12 meters) wide and can travel at speeds of up to 33,000 mph (53,000 km/h). For comparison, an intercontinental ballistic missile can reach speeds of up to 15,000 mph (24,000 km/h), according to The Center for Arms Control and Non-Proliferation.

The researchers did not speculate as to what these UFOs may be. Rather, their paper focuses on the methods and calculations used to detect the objects. However, according to a 2021 report from the U.S. Office of the Director of National Intelligence (ODNI), it’s likely that at least some UAP are “technologies deployed by China, Russia, another nation, or a non-governmental entity.”

Given the ongoing Russian special operation in Ukraine, which began in February 2022, it’s reasonable to suspect that some UAP described in the new report may be linked to foreign surveillance or military technologies.

According to the ODNI report, other possible explanations for UAP include “airborne clutter,” such as birds and balloons; atmospheric phenomena, such as ice crystals; or classified government projects. Neither the U.S. nor Ukraine reports raise the possibility of extraterrestrial visitors.

The U.S. government has openly renewed its interest in UAP investigations since 2017, when several videos taken by U.S. Navy aircraft leaked to the media. The now-infamous videos showed unidentified aircraft moving in seemingly impossible ways, with no explanation.

The government subsequently declassified the footage and recently revealed that more military footage of UAP encounters does exist, though the Department of Defense (DOD) will not be releasing them due to “national security concerns.” Earlier this year, Congress approved funding for the DOD to open a new office focused exclusively on managing reports of UFO sightings by the U.S. military. The authors of the new UAP report out of Ukraine added that the country’s National Academy of Science is interested in contributing to this ongoing research.