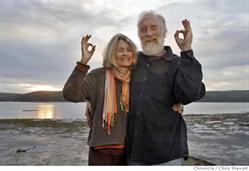 An American couple, Donna Sheehan and Paul Reffell, known for their unusual protests and initiatives against wars, have now proposed to the world to unite in a revolutionary way of fighting against war through love. Thus, on 22 December 2006, with the occasion of winter solstice, all people are invited to make love for the peace of the world! Donna and Paul have called this event „Global Orgasm” or „Global Oh!” and they are convinced that it will have a positive impact upon the aura of the planet, with immediate consequences upon the development of global events.

The 22 of December event is benefiting from the support of the Coordinators of the Global Consciousness Project of Princeton University, a scientific project of global interest which measures the influence of some events upon the energetically aura of the Earth. The same scientific project, has previously confirmed the positive impact, at global level, of the yang spirals organised in Romania by the Movement for Spiritual Integration in Absolute (MISA) held with the occasion of the annual Hiatus in August.

Promoting the idea of a synchronised orgasm, the two militants for peace are aiming to help people channel their sexual energy in a positive sense, not towards destructive actions (violence is born, amongst other reasons, out of frustration and the incorrect channelling of the creative energy). The sexuality best attracts the men attention and also it is the greatest energy that the human being has at its disposal.

This is how the event is described on the presentation website www.globalorgasm.org: “In order to produce a transformation in the energy field of the Earth the intent is that the participants concentrate any thoughts before, during and after the orgasm on peace. The combination of high- energy orgasmic energy combined with mindful intention will have a much greater effect than previous mass meditations and prayers. The goal is to add so much concentrated and high-energy positive input into the energy field of the Earth that it will reduce the current dangerous levels of aggression and violence throughout the world. The results will be registered on the worldwide monitor system of the Global Consciousness Project”
Paul & Donna’s initiative has not been left without echo, as it has awakened great interest but also criticism. Answering to those who have made negative remarks, Paul Reffell writes: „We are only people who care about the world they live in. We notice that humans have more and more the tendency to attack, irrespective of the context, without thinking of consequences, instead of using their heart and intelligence which every human being has been blessed with. It has come the time that we do everything we can to stop these violent impulses. We hope that all people can join, even if this would mean for some of them to let go of their weapons for a brief moment”

From a psychological point of view, the idea of making love to counteract the violence makes sense. Carol Queen, a well known sexologist in America comments on this event: „It is very natural to make a connection between pleasure and peace. When you experiment pleasure you no longer have a destructive and aggressive behaviour”
Therefore, loving couples have 24 hours at their disposal, the entire day of 22 December, to take part in this world wide event. We suggest that you apply the sexual continence and, of course the transfiguration of your loved one. Knowing also several esoteric elements regarding the power of synchronised action, we suggest to the yoga participants to join starting with 19.30 (GMT +2), in line with the special program details of which you can also find on this website.

You can read also:

They fight naked against the war.Who are the initiators of the 22 December 2006 event?

They fight naked against the war