They fight naked against the war 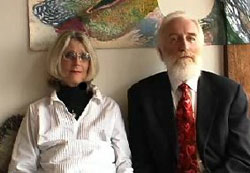 The organisers of the Global orgasm event, which suggest to all humans on the planet to make love on the winter solstice, are Donna Sheehan (76 years) and Paul Reffell (55 years), an American couple who founded an anti-war foundation, called Baring Witness. The organised protests by Donna against the  Iraq war have attracted the world attention through the unexpected.

On the 14 November 2002 Donna and 50 other women have formed with their nude bodies the word PACE. The photographer Art Rogers has immortalised the moment and the images have travelled the world. „Wearing nothing else but the he afternoon rain, 50 determined ladies have laid on a Californian to embody, literally, the Peace. Women of all ages and social backgrounds have taken their clothes off, not because they were some exhibitionists, but because they felt the need to shock an indifferent world to break the vicious circle of war” – this is how the organisers have presented the event.

„Up to now, having an usual behaviour, we came to no result in determining the men to give up the war. We voted, we marched and protested with way to little effects. We are now taking this daring step to show how desperate is the situation regarding the war” said then Donna Sheehan.

The idea came to Donna from a similar protest which took place in Nigeria. 600 naked women headed by Helen Odeworitse have occupied the terminal of Chevron-Texaco company and stopped the production to get a dialog between the locals used as cheap labour, living in poverty, and the management of the petrol company. Their gesture came after a long period when they were many armed conflicts between locals and Chevron-Texaco; during such attacks the locals were taking hostages some of the foreign employers of the company or sabotage the works to get in exchange sums of monies or workplaces, and in return the company was hiring bodyguards that would beat up and torture the locals.

This is how this action was described by the American Democrat Press Santa Rosa from 28 July 2002: „Who would not like the story of the Nigerian women? They got what they needed most: a school, a farm, medical services, workplaces for their sons and husbands – from a petrol giant without pointing any guns. The women from the Nigerian Delta only asked that Chevraco-Texaco play honestly. The multinational company made a lot of monies extracting the petrol from the Nigerian land at very low prices in return polluting their waters. Whilst the company was making a fortune exporting millions of barrels of petrol a day, no-one seem to observe that the people around them were incredibly poor. The Nigerian women have occupied a terminal, have stopped the production and have refused to leave until they had a dialogue with the management of the company. Their only threat was that they got undressed – being naked in front of the others, in their culture being a huge gesture of shame for their husbands. Some will call this an immense sacrifice.”

Similar protests around the world 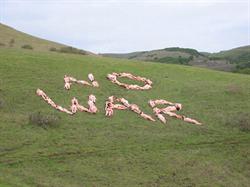 The photo realised in 2002 with the nude bodies of the women headed by Donna Sheehan has travelled the world and has encouraged many people to protest in similar ways against the war. In December 2002 the word Peace has appeared written again with the bodies of 100 women next to the sign Peace made by the bodies of 25 de men, on a beach in America.

In January 2003, 40 women have formed on a hill in USA, with their bodies the words „No War”. At this event, again have taken part women of all ages. Mary, 53 years old, has come with her daughter, Alexis, 23, who brought her little daughter Malika.
„Women care that their sons, brothers, lovers die in wars. We are the ones who give them life and we care about life. An old Russian saying tells that „each bullet hits the heart of a mother“ All women in the world should refuse to make love to men until the war stops, the same way Lisistrata did in Aristofan’s play. War is not healthy for anyone”  said then Donna Sheehan. 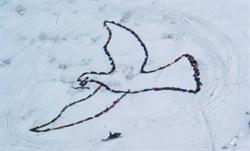 The actions continued during the winder. A group of 95 women, this time dressed, due to the coldness, have laid flat on the ice surface of Lake Superior in USA to form a gigantic dove as symbol of peace. During this time people who wanted to intimidated them were calling names from two snow-mobiles, circling them in threat. “I felt an immense power. The violence of the ones insulting us from the snow-mobile has been for me the illustration of the violence at global level. I was laid flat on the ice, feeling totally vulnerable and in the same time incredibly powerful” tells one of the participants.

„What these women do is an exposure of their own vulnerabilities, yet they do this so the justice and peace becomes the norm in the society and not war and violence”. The exposure of the naked human body has had a strong effect, in a powerful contrast with the aggressive actions realised in the wars now carried out by overdressed people, both literally and not. Up to now, there have been 170 such actions, in which people, mostly women, but also men, have formed with their bodies peace messages in 26 countries world wide. This has made the press compare these actions with the wheat circles which seem to appear in more and more areas of the planet.

Sexual frustration, the origin of the violence?

Donna Sheehan and Paul Reffell explain the sexual behaviour from a new perspective, which they see as the basis of the conflict. Their view stems from a less known work of Darwin, called „The sexual selection,” in which Darwin demonstrates that at all species the female is the one who initiates the mating, whilst the male has the role of attracting her by a display of attributes varying from lively colours of the feathers in some birds, an exquisite tale (as is the peacock) or a pair of big and rich crown (in the case of a mule deer).

Starting from these conclusions, they have become convinced that in the case of the human specie the inversion of this mechanism has lead to an extreme frustration of men, which are now incredibly afraid of being rejected, in turn this fear making them aggressive. From this perspective the war is an unconscious effort of men to impress the women with their “weapons” and this is why they are so attracted by it.

Promoting the idea of a synchronised orgasm, the two Americans are aiming to help people channel their sexual energy in a positive sense, not towards destructive actions (violence is born, amongst other reasons, out of frustration and the incorrect channelling of the creative energy). The sexuality best attracts the men attention and also it is the greatest energy that the human being has at its disposal.

In order to produce a transformation in the energy field of the Earth the intent is that the participants concentrate any thoughts before, during and after the orgasm on peace. The combination of high- energy orgasmic energy combined with mindful intention will have a much greater effect than previous mass meditations and prayers. The goal is to add so much concentrated and high-energy positive input into the energy field of the Earth that it will reduce the current dangerous levels of aggression and violence throughout the world. The results will be registered on the worldwide monitor system of the Global Consciousness Project” This is how the event is described on the presentation website www.globalorgasm.org

Carol Queen, a well known sexologist in America comments on this event: „It is very natural to make a connection between pleasure and peace. When you experiment pleasure you no longer have a destructive and aggressive behaviour”

This initiative has not been left without an echo, as it has awakened great interest but also criticism. Answering to those who have made negative remarks, Paul Reffell writes: „We cannot leave without transformation. The fight for survival in this world is not wan by the strongest but by the most adaptable. We do not predict the future and then we wait, we create the future. And for those who are against us, we answer we are not Anti-Americans we are pro-humanity in its best sense, seen as a species that is able to overcome its violent tendencies choosing to do so. We are not worshipers of Satan, whatever that might mean. We are not very hippie either, in the 60s Donna was a tourist agent and I was still in high school. We are only people who care about the world they live in. We notice that humans have more and more the tendency to attack, irrespective of the context, without thinking of consequences, instead of using their heart and intelligence which every human being has been blessed with. It has come the time that we do everything we can to stop these violent impulses. We hope that all people can join, even if this would mean for some of them to let go of their weapons for a brief moment”