Power of the People – From Encaged to Outraged 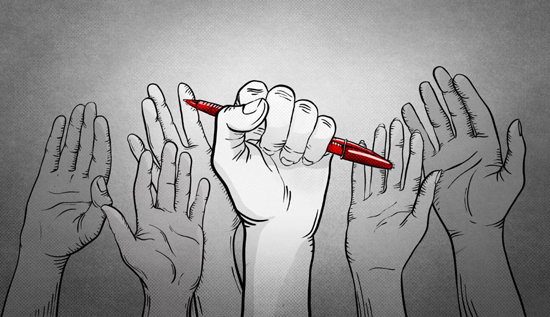 “Those who will not reason, are bigots, those who cannot are fools, and those who dare not, are slaves.” Lord Byron

The system is not improving, it is not progressing. It is precarious and faltering, beleaguered beyond the capacity to fix itself. And with the orange-faced personification of bigotry, intolerance, pomposity, greed, hate and overreaching plutocracy at the top of the unsustainable pyramid, it has been found waiting, covertly fixed and stagnating.

But people are slowly starting to wake up to this fact, realizing that they can no longer wait for the system to fix itself. They must take matters into their own hands, seek solidarity with those who also seek healthy, sustainable, and progressive change, and discover that the door to their cage has always been open. A deepening of the truth is on the other side.

From encaged to outraged, we the people are beginning to break the invisible chains of cultural conditioning and state-driven political propaganda. We are filling the streets, voting with our feet, and pounding the concrete with our wide awake voices screaming “Freedom; Anarchy; Love!” in the face of tyranny, statism, and slavery. We realize that the vertical democracy of statism has utterly failed, and only the horizontal democracy of self-rule can solve the equation of the political human condition. Indeed. As Leonardo DaVinci once said, “Knowledge is not enough; we must apply. Being willing is not enough; we must do.”

“The way to learn courage is to be afraid of something and then do it anyway.” Brandon Stanton

The uncaged citizen is a self-ruling, self-reasoning, courageous individual willing to be unpopularly right despite the popular wrong of the majority. Like Django unchained he is that “one in ten-thousand nigga!” willing to do what it takes in order to bring water to the wasteland, to bring freedom to all tyrannical landscapes, knowing, as Martin Luther King Jr. did, that “Injustice anywhere is a threat to justice everywhere.” Have no illusions, the current system of vertical democracy reeks of injustice. The top-down chain of obedience is profoundly corrupt. It will take bottom-up, courageous, horizontal solidarity to balance things out. Indeed, the uncaged citizen is the bane of the fenced-in corruption of an unjust system.

Uncaged citizens are filling up the streets, pounding their feet against the atrocities of the state. They are mobilizing against intolerance and hate, misogyny and rape, plutocracy and greed. They are transforming their love for humanity into concrete deeds and courageous acts that set a healthy example against the unhealthy machine of the corrupt state. They are tiny Davids with slingshots of justice aimed at an unjust Goliath. They are peaceful warriors attempting to chop the head off an environmentally unsustainable Black Snake. Even the meek are beginning to rise up, digging down deep for that unquenchable courage. As Plato said in The Republic, “There is in every one of us, even those who seem most moderate, a type of desire that is terrible, wild, and lawless.” And in a world that is fast beginning to outlaw freedom and self-rule, such desire is needed more than ever before.

“The object of life is not to be on the side of the majority, but to escape finding oneself in the ranks of the insane.” Marcus Aurelius

As it stands, the ranks of the insane is the unhealthy chain of obedience run amok within a corrupt vertical democracy that simply does not work well for healthy human beings. The solution is to escape the ignorance of the majority and join the ranks of the informed minority who are joined in solidarity under a flag of horizontal democracy and freedom, void of rulers and masters.

Outrage is merely a side effect of learning the painful truth. It’s the emotion that grips us when we finally stop asking to be kissed with lies and begin asking to be slapped with truth. It’s when we finally pull our heads out of the comfortable sand and begin looking around at the uncomfortable truth. Sure, it annoys us, but lo and behold, there are others there who are annoyed as well, who are also waking up to the corruption and greed of the plutocratic state. They are willing, as we are, to rise up with love and courage in their heart, despite the hate and indifference of the state and those who kowtow to it. They too want to leave a healthier, more sustainable and just world to their children and grandchildren. We are joined in solidarity toward such a noble cause and outraged against any system and any person who works against it.

Similarly, as a citizenry, true nobility is being superior to our former political position. Horizontal Democracy, void of rulers and masters, is far superior to vertical democracy, dependent upon a chain of obedience. There is more progressive evolution in a spoonful of horizontal democracy than in an entire ocean of stagnant vertical democracy. Vertical democracy does not work well for healthy human beings precisely because of the fact that power tends to corrupt. Horizontal democracy is robust with checks and balances, so that power rarely has a chance to ever become corrupt. With neither masters, nor rulers attempting to monopolize power, human kind is more likely to evolve into a more progressive and sustainable species.

At the end of the day, the power of the people cannot be found within a vertical form of democracy dependent upon a chain of obedience. This is because power tends to become corrupt at the top of the chain of obedience, thus causing injustice within the entire system, while oppressing the bottom of the hierarchy. The power of the people can only be found within a horizontal form of democracy void of masters and rulers, where the chain of obedience lies broken and discarded and the links in the chain are free to form in solidarity of brotherhood for freedom and justice despite the tyranny and injustice of the state. As Maria Robinson said, “Nobody can go back and start a new beginning, but anyone can start today and make a new ending.”

WikiLeaks: The CIA Was Behind The New York Terror Attack