Suzanne Simard revolutionised the way we think about forests, trees, plants and fungi with the discovery of the woodwide web. The ecologist’s new book shares the wisdom of a life of listening to the forest. 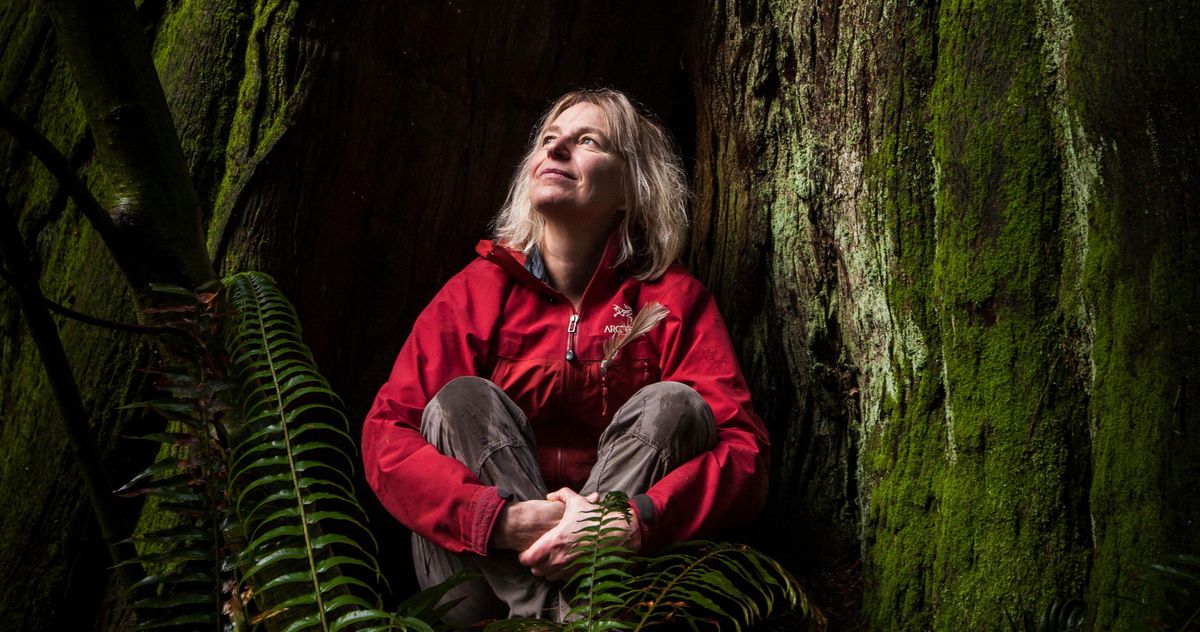 When Suzanne Simard made her extraordinary discovery – that trees could communicate and cooperate through subterranean networks of fungi – the scientific establishment underreacted. Even though her doctoral research was published in the Nature journal in 1997 – a coup for any scientist – the finding that trees are more altruistic than competitive was dismissed by many as if it were the delusion of an anthropomorphising hippy. ‘It was like intercepting a covert conversation over the airwaves that could modify the course of history,’ says Suzanne Simard.

Today, at 60, she is professor of forest ecology at the University of British Columbia and her research of more than three decades as a “forest detective” is recognised worldwide. In her new book, Finding the Mother Tree – a scientific memoir as gripping as any HBO drama series – she wants it understood that her work has been no brief encounter: “I want people to know that what I’ve discovered has been about my whole life.” Her moment had come is perfect time and the research into forest ecosystems and mycorrhizal networks (those built of connections between plants and fungi) is now mainstream and there is a hunger for books related to the subject: Peter Wohlleben’s The Hidden Life of Trees and Merlin Sheldrake’s Entangled Life – about the hidden life of fungi – extended her thinking about the “woodwide web”, while the heroine of Richard Powers’s Pulitzer prize-winning 2018 novel The Overstory is said to have been inspired by Simard.

Due to Suzanne Simard discovery now it is known, from a scientific point of view, that what we can’t see in walking into a forest are the threadlike fungi that fuse with the roots of trees, helping them extract water and nutrients such as phosphorus and nitrogen in exchange for carbon-rich sugars made by trees through photosynthesis.

Simard talked about the experiment that was her eureka moment

Simard had learned from her first job with a logging company (she was the only female employee) about the damage commercial clear-cutting could do to a forest. And she had witnessed that removing competition – rival trees and understory – did not, as foresters predicted, promote growth. At grad school in Oregon, she was determined to “figure out how paper birch and douglas fir interact. I knew that without birch, fir was not very healthy. When birch was removed from the ecosystem, infections would often get on to the fir.” She guessed a “magical dance” was going on that “provided health to the whole mixed forest”. She laughs disarmingly. “I didn’t really know what I was doing, I was lucky it worked out.”

She planted her seedlings in groups of three: “Paper birch and douglas fir, which form ectomycorrhizals [symbiotic relationships with fungi on the outside of their roots] and cedar, which forms arbuscular mycorrhizals [symbiosis with fungi inside their roots].” She knew cedar would be “getting its information through the soil, not through mycorrhizal networks”. Cedar would be her control. “When the time came, I went into the field with huge plastic bags like garbage bags from a scientific supply company, for gas sampling. I had 60 triplicate groups of trees and would do a few a day. I’d put a bag over a birch and another over a fir. I’d inject the fir’s bag with one isotope and the birch’s with a different isotope [carbon-13 and carbon-14]. Then I’d wait a week. I went back and harvested the seedlings and looked for the isotopes to see how much had ended up in the donor, how much in the neighbouring plant and how much in the cedar. Very little ended up in the cedar. I found that most was in the birch and fir. Just by looking at the data, I could determine there was communication going on between them.” She is matter of fact about this now. At the time, she was ecstatic: she threw her arms up into the wind and shouted “Yes!” The discovery felt “miraculous” and “otherworldy. Like intercepting a covert conversation over the airwaves that could modify the course of history.” 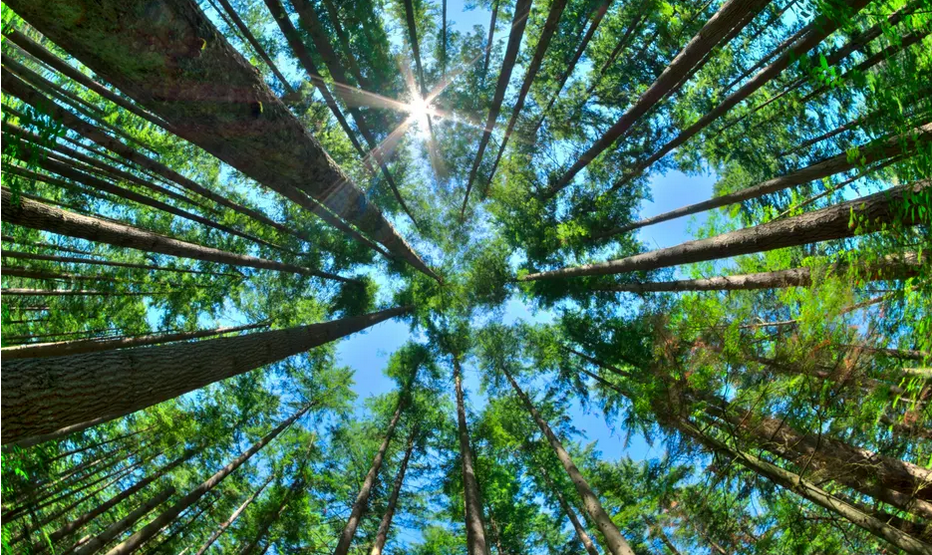 Simard has an attractively warm manner (to emphasise a point, her arms branch out expansively) and a transparency, too, as if she were determined not to get in the way of her subject. Yet the beauty of her book is in the grafting of events from her life – the tragic death of her rodeo-rider brother, the birth of her daughters, the end of her marriage to a fellow forester, her new relationship with a woman, her recent breast cancer – on to her experience of the forest. She goes with the grain: “It became uncanny, almost eerie, the way my work unfolded in lockstep with my personal life, entwined as intimately as the parts of the ecosystem I was studying.” Just as she disinters earthy mushrooms and the finest of filaments, so she lays bare the human heart with moving simplicity.

One of Simard’s most thrilling beliefs is that trees can recognise us. “Trees perceive many aspects. They know when they’re infected and have an instantaneous biochemical response. When we manipulate trees, they respond.” Would she go as far as to suggest a tree can feel pain or grief? “I don’t know. Trees don’t have a brain, but the network in the soil is a neural network and the chemicals that move through it are the same as our neural transmitters.” She is currently collaborating on research to see whether trees can distinguish us as humans.

Suzanne Simard: ‘The forest accepts me. There’s no judgment. You’re just there with it. When I was going through cancer treatment, all I wanted was to be there’

Simard grew up near the Monashee mountains of British Columbia. Her grandparents were among the original settlers – they even have a local mountain range named after them. They were horse loggers of cedar, douglas fir and white pine. She and her siblings spent summers encircled by cottonwoods on Mabel Lake. They slept on a logger’s houseboat, built rafts, ate huckleberry pies – ran wild. One assumes she must have inherited tough genes (her great-grandfather killed a grizzly bear advancing on her mother). And in her book she describes her own hair-raising escapes. On one occasion, she had to climb a tree and wait more than an hour until a “mama grizzly and her cubs” moved on: “I remember worrying the bear might grab my leg and pull me down,” she says. But as to being tough: “As a child, I was extremely shy. My grandfather went to war and got PTSD, which can run through the family line.”

Forests have always been her sanctuary: “The forest accepts me. There’s no judgment. You’re just there with it. When I was going through cancer treatment, all I wanted was to be there.” She believes there is a physiological explanation to the unburdening sensation we experience through nature. “One aspect people don’t realise is, when you’re walking in the forest, there is a whole city underfoot that includes myriad organisms, including actinomycetes [bacteria] that excrete chemicals that can make us a bit high – there’s an aphrodisiac atmosphere going on. You know when it rains and you get that earthy smell? What occurs is water gets into the soil and the bacteria burst – that’s what we’re smelling. I don’t think romantic poets would have wanted to have hear about that, I say”, and she laughs.

She laments our lack of vocabulary for communication between trees and adds: “Western Canada’s aboriginal people have known about the connection between trees for a long time and have ancient language to describe it.” But she believes we can learn from the way trees interact: “Some trees have lived for thousands of years. They get along, develop sophisticated relationships and listen – they’re attuned. Attunement is something we all need too.”

There are still purists wary of Simard’s tendency to anthropomorphise. But it is her gallant mission in the book and in her life – and one essential to combating the climate crisis – to make science more humanly engaged: “Anthropomorphism is seen as the death knell of science. But there is a deeper problem. In western science, from Plato onwards, we’ve separated ourselves from nature. As dispassionate observers, we miss the mystery. We are all part of this.”