At the heart of the second trial to come out of Special Counsel John Durham’s investigation into the origins of the Trump-Russia collusion probe is a story of disinformation.

Marc Elias, general counsel for Hillary Clinton’s 2016 presidential campaign, testified both during a House Intelligence Committee investigation in 2017 and recently during Durham’s ongoing probe that he was the one who hired the opposition research firm Fusion GPS to dig up dirt on then-candidate Donald Trump. 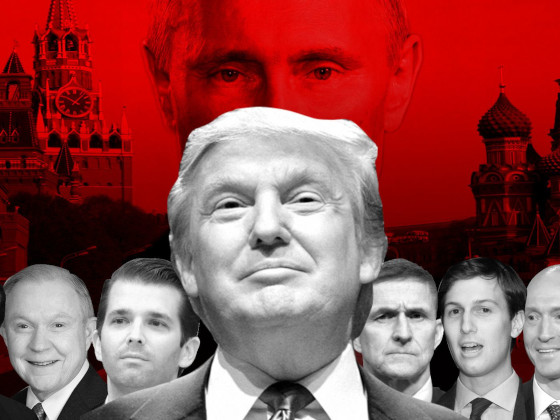 Fusion GPS went on to commission former MI6 agent Christopher Steele to create the infamous “Steele dossier,” which purported to show collusion between Trump’s campaign and the Kremlin. It contained several salacious and since-debunked claims about Trump and his alleged ties to Russia.

The federal government infamously used the now-discredited dossier to obtain a warrant to surveil former Trump 2016 campaign aide Carter Page. The Justice Department later admitted the warrant application was full of misinformation and the surveillance warrant should’ve never been approved.

The primary source of the Steele dossier was Igor Danchenko, a Russian analyst who’s now on trial as part of Durham’s investigation for allegedly lying to the FBI about his own sources for the information that he provided to Steele.

Federal prosecutors allege that Danchenko, who has pleaded not guilty, fabricated and concealed his sources in conversations with the feds. The trial began in Alexandria, Va. on October 11.

The case highlights how potent a weapon disinformation can be in today’s political climate, where falsehoods can slip through the cracks and transform into received truth without the public noticing.

However, it works the other way as well.

Indeed, in the past few years the opposite has more often been the case: Something deemed disinformation ultimately turns out to be true. Here are seven recent examples of elites in government, Big Tech, and other positions of influence targeting various ideas as mis- or disinformation only to be proven wrong in the end as the facts come in:

In October 2020, the New York Post obtained emails from a laptop that President Biden’s son, Hunter Biden, had abandoned at a repair shop in Delaware.

Shortly after the story was published, Facebook’s policy communications director boasted the social media giant was “reducing its distribution on our platform.” He added the report would be scrutinized by third-party fact checkers “to reduce the spread of misinformation.”

Twitter quickly followed Facebook’s lead, blocking users from posting or reading the story. The company even locked the Post’s primary Twitter account, apparently because of “the lack of authoritative reporting on the origins of the materials included in the article.”

Prominent mainstream media outlets either ignored the Hunter Biden story or cast doubt on its authenticity.

After the Post’s story was published, 51 former intelligence officials signed a public letter dismissing the report as Russian disinformation. The laptop “has all the classic earmarks of a Russian information operation,” they wrote.

Only in recent months have government officials and the nation’s most prestigious media outlets admitted the authenticity of the laptop, which revealed a trove of details that are now being used as part of a government probe into Biden’s taxes and business dealings. 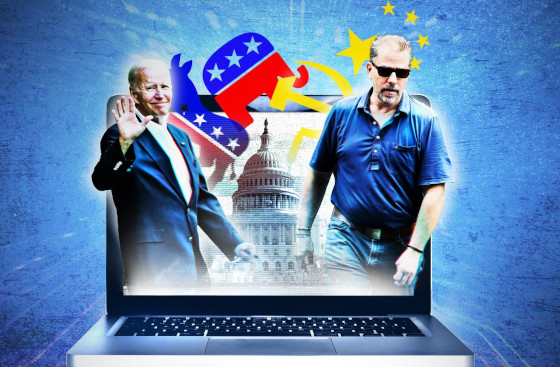 Experts, lawmakers, and journalists roundly dismissed the theory that covid-19 leaked from a lab in Wuhan, China, attacking those who gave the idea credence as bigots.

New York magazine reported how the media “dismissed” the possibility that covid-19 leaked from a Chinese lab and “smeared” those who supported the theory.

Nina Jankowicz, who was appointed head of the Department of Homeland Security’s now-defunct Disinformation Governance Board, dismissed the theory, saying it was “politically convenient” for the Trump administration to entertain the idea.

Meanwhile, Democrats in Congress resisted efforts to probe the merits of the lab leak theory.

Over the past year, however, the theory has gained widespread credibility from a range of evidence.

When the covid-19 vaccines were first made available, they were billed by the media and public health professionals as mechanisms to limit transmission of the virus and ultimately end the pandemic.

Assertions questioning the efficacy of the vaccine were deemed “misinformation” by Big Tech companies and the Biden administration, which categorized many such assertions as “conspiracy theories.”

Under a new California law, doctors who spread misinformation about covid-19 could even be subject to discipline by state medical boards and risk losing their licenses.

However, a director of the pharmaceutical giant Pfizer admitted recently at a hearing before the European Parliament that, at the time of its introduction, the covid-19 vaccine had never been tested for stopping transmission of the virus, according to a video of the exchange posted by parliamentarian Rob Roos.

Citing new data, some experts argue the vaccine can have a range of adverse effects, including potential heart problems in young adults.

Dr. Harvey Risch, professor emeritus of epidemiology at Yale University, recently told the “Just the News, No Noise” television show that the Centers for Disease Control and Prevention has “officially backtracked on the vaccines as a method of public health and pandemic control.”

Journalists, Democrats in Congress, and others have lambasted defenses of former President Trump’s efforts to prepare for unrest ahead of the Jan. 6 Capitol riot as well as criticisms of House Speaker Nancy Pelosi’s handling of that fateful day as “lies,” “counternarratives,” “conspiracy theories,” and “disinformation” spread by Republicans and Trump supporters. 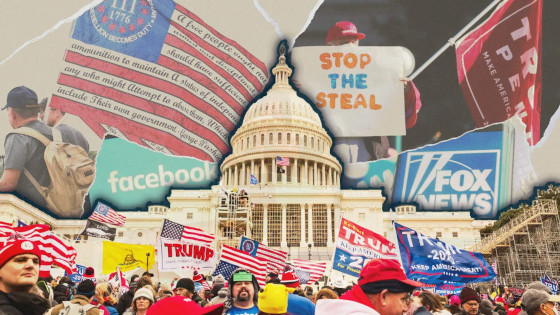 However, Just the News reported FBI intelligence warning that Jan. 6 protesters might violently storm the Capitol was emailed the night before the riot to a top aide to Senate Majority Leader Chuck Schumer but was never sent to frontline police commanders and officers.

The Capitol Police rejected the offer of troops, according to government documents. Soon after, however, then-Chief Steven Sund decided he wanted the troops after all but was turned down by the House sergeant at arms, who reports to Pelosi.

Meanwhile, Trump had signed an order on Jan. 4 to deploy 20,000 Guardsmen to prevent any violence if requested by Congress, which turned down the request.

Just the News also revealed that Capitol Police had compiled a secret after-action review months after the Jan. 6 riot that identified sweeping intelligence and security failures by the department.

Pelosi has come under fire from Republicans for obstructing congressional efforts to investigate the security vulnerabilities exposed by the Jan. 6 Capitol breach.

The same voices dismissing the Jan. 6 “counternarrative” have also dismissed those raising concerns that Jan. 6 defendants have been targeted and mistreated for political reasons.

The Justice Department has arrested nearly 900 people for charges related to Jan. 6, imprisoning most without a trial. Several have said the FBI, Justice Department, and federal prison officials under the Biden administration violated their civil and constitutional rights. The vast majority weren’t accused of carrying a weapon, assaulting law enforcement, or destroying property. Many didn’t even enter the Capitol building.

Big Tech and the Biden administration have infamously suppressed and castigated claims of irregularities in the 2020 presidential election.

For example, whistleblower documents recently released by Republican Sens. Josh Hawley (Mo.) and Chuck Grassley (Iowa) showed government officials writing that disinformation threatens homeland security, especially “conspiracy theories about the validity and security of elections” and “disinformation related to the origins and effects of covid-19 vaccines or the efficacy of masks.”

In February, the Department of Homeland Security put out a “National Terrorism Advisory Bulletin” discussing how “conspiracy theories,” “misleading narratives,” and “other forms of mis- dis- and mal-information” can fuel foreign and domestic terrorism. It cited “false or misleading narratives regarding unsubstantiated widespread election fraud and covid-19” online as “key factors contributing to the current heightened threat environment.”

Nonetheless, it has been reported numerous examples of confirmed illegalities and irregularities in the 2020 election. 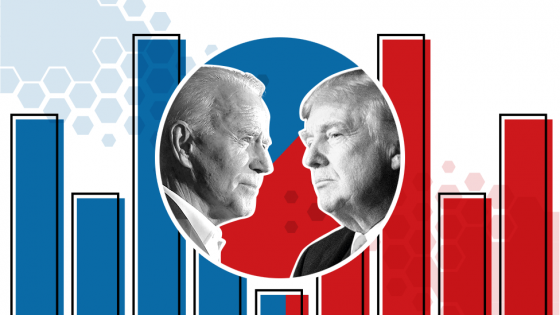 Critical race theory (CRT) argues racism is entrenched in all systems of American society and all disparities between the races indicate racial discrimination. The media and proponents of CRT have argued its critics are pushing misinformation, portraying the theory as being more prevalent than it actually is.

Last year, for example, Jankowicz referred to opponents of CRT as “disinformers,” accusing them of peddling disinformation to stoke anger and make money off the uproar.

But parents have been vocally protesting the presence of CRT in their schools.

The National School Boards Association sent a letter to Biden asking his administration to investigate threats against public school officials. In the letter, the NSBA specifically referred to parents who protested the teaching of CRT in the classroom, suggesting such actions should be classified as “domestic terrorism.”

The NSBA requested that the Justice and Homeland Security departments probe and prosecute these “crimes” under “the Patriot Act in regards to domestic terrorism.”

Less than a week later, Attorney General Merrick Garland sent out a memo warning that the Justice Department is “committed to using its authority and resources to discourage” the “threats” described by the NSBA, “identify them when they occur, and prosecute them when appropriate.”

The memo directed the FBI to work with each U.S. Attorney to convene meetings nationwide to discuss strategies for addressing these threats. Garland also mentioned his intent to “launch a series of additional efforts in the coming days” which, according to the Justice Department, would “determine how federal enforcement tools can be used to prosecute these crimes.”

The NSBA later apologized for the letter after receiving backlash for comparing parent protests to domestic terrorism. However, subsequent reports indicated coordination between the NSBA and the Biden administration on the former’s letter and Garland’s subsequent memo.

Evidence has shown school districts teaching the ideas of CRT as part of the curriculum, even if they don’t refer to CRT by name.