The COVID cult marches on in 2021, leaving natural unalienable rights, people’s livelihoods and human freedom decimated in its destructive wake.

The US CDC (Centers for Disease Control and Prevention) has recently tried to tell people they have to wear not one, but two masks when traveling using some form of public transport: “Cloth masks should be made with two or more layers of a breathable fabric that is tightly woven”! 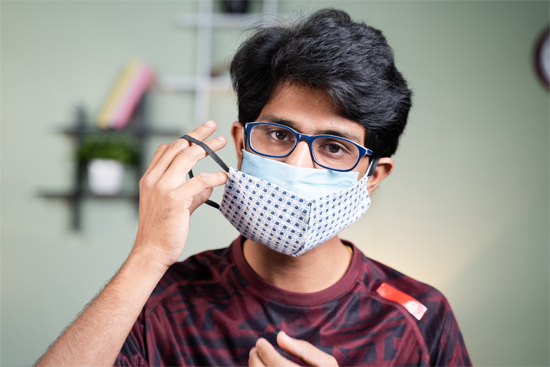 It is important to point out that there are major studies proving that masks don’t stop the transmission of viruses.

This is the same CDC, you may recall, whose own figures were analyzed by Johns Hopkins researcher Dr. Genevieve Briand to show that there were no excess deaths in America in 2020.

It is also the very same CDC, you may recall, that has admitted that it has never had any true viral isolate of the alleged novel virus SARS-CoV-2, and that it concocted the digital SARS-CoV-2 genome of 30,000 base pairs from an actual specimen of 37 base pairs.

The consequences of this giant fraud are far-reaching; the COVID cult appears to be enabling the NWO (New World Or-der) manipulators to carry out the 10 stages of genocide, which was a theory of American scholar Dr. Gregory Stanton. He applied his theory to past genocides in history.

However, the same process and stages seem to be taking place right before our eyes in the COVID plandemic. These stages/steps don’t necessarily take place in a linear fashion; they may also take place simultaneously.

The Planned SPARS Pandemic And The Limits Of Tyrants

Before we get into the 10 stages, we all need to realize that the COVID scamdemic isn’t going anywhere right now. It’s only going to get worse, until enough people stand up and challenge it.

The World Bank classifies COVID as a project ending in March 2025. 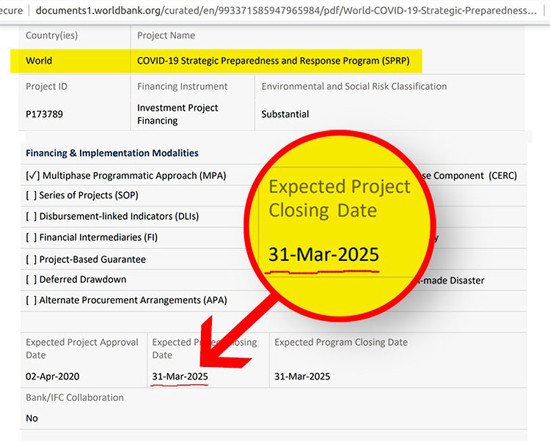 If the masses continue to act as acquiescent zombies, this fake pandemic may be pushed all the way until 2025, and will probably be ‘augmented’ with a false flag bio terror attack or a “Pandemic II” as NWO frontman Bill Gates “predicted.”

Diana Lenska exposed another simulation called the The SPARS Pandemic which details a scenario where a new virus infects humanity in 2025, and lasts until 2028. We all how know how these ‘simulations’ have a strange and disturbing habit of becoming real… just a coincidence, of course, the perpetrators say.

At this juncture, it is worthwhile remembering this very important quote from Douglass Frederick: “The limits of tyrants are prescribed by the endurance of those whom they oppress.”

Gates and his Pandemic II, the CDC and its two masks, Biden and his 100-day mask mandate – all tyrants seeing how far they can push you into accepting their control and tyranny, and the abrogation of your rights.

And again, the World Bank classifies COVID as a “project” that is planned to continue until the end of March 2025 (see above image). Are we going to accept this?

In the past, this was done along the fault lines of ethnicity, race, religion or nation. Now, in the context of the COVID cult, it’s done according to who believes and who rejects the COVID cult narrative.

If you are a dissenter or non-believer, you are being singled out for your thoughtcrime. If you stand for medical sovereign-ty or bodily autonomy, you are being put into a separate class.

Symbols are used in many ways. Symbolization is used here to make the targeted group, who are enemies of the state, stand out as ignominious and conspicuous dissenters or traitors.

In the times of 3rd Reich, the Nazis forced the Jews to wear a yellow star as a symbol that they were in a different class.

By refusing to wear a mask, these dissenters voluntarily make themselves a highly visible target.

Discrimination is illegal in many nations, but that doesn’t seem to matter in the COVID cult. Centuries-old legal traditions and human rights have been trampled underfoot. 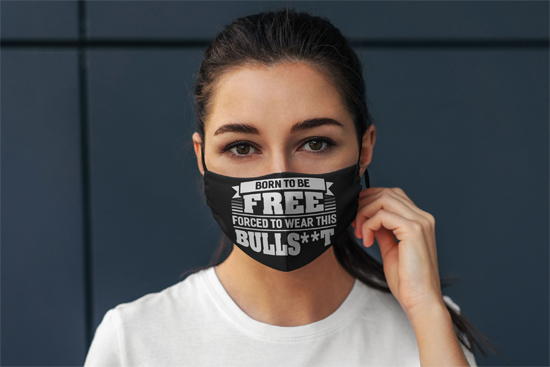 Discrimination is a way of tightening the screws and increasing the pressure for what is next to come.

This intensity picks up in this next stage. Dehumanization always seems to be a necessary precondition to murder, since it involves making the target appear less than human, not valuable and unworthy in the eyes of the killers-to-be.

Generally, the targeted group is robbed of its humanity through labels, insults and characterizations which all emphasize distinctions rather than the commonality of what all of us humans have regardless of our differences.

In 2019, the WHO (World Health Organization) declared vaccine hesitancy (and by extension ‘anti-vaxxers’) among the top 10 threats to global health.

Past genocides consisted of war, mass murder, bloody massacres and/or mass graves. If a genocide comes from the COVID operation, it will be less sensationalistic. Operation coronavirus is a silent operation using fear, trauma-based mind control and other ritualistic elements.

This stage is an intensification of the first one. If you are a social engineer, once you have separated the masses into different classes, you can then further entrench that division via dichotomy, setting the groups into mutual antagonism against each other.

This has been happening for years in the US anyway, even before Operation Coronavirus was launched.

Things have reached a low point in the US where it seems many Americans cannot simply remember they are both human and American and the same time, and feel the need to dehumanize their ‘opponent’ if he or she is not on the correct political team.

Whatever occurred to being able to agree to disagree, or being mature enough to accept others have opposing views to yours?

In the COVID cult, the NWO controllers have deliberately fueled the fire between the masses and the discriminated aware minority via the MSM, which constantly spreads propaganda that healthy people are asymptomatic carriers.

This stage of preparation involves things like isolation and quarantine camps. Politicians have been suggesting detainment camps (i.e. prisons) for those who refuse to embrace the COVID cult. There have been rumors for decades in the US about alternative uses for FEMA camps. Similar discussions and debates have taken place in Canada, Australia, New Zealand and Germany as well. Recently The Telegraph reported that Germany was building quarantine detainment camps for COVID violators.

If you don’t have the “mark”, you’re out of luck, and you’re either excluded from society, excluded from commerce or liter-ally imprisoned. Right now the mark is a mask, but next it will be the vax (and its extension – the vaccine certificate or immunity passport), and finally the microchip. 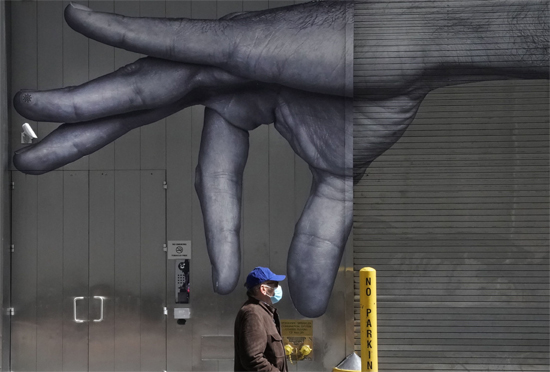 At this stage, all the silent and covert preparations leading up to this point become overt. In the past, the identified targeted group was imprisoned, deported and/or their property was seized.

In some states and nations, it is already law that the property of an “infected individual” can be seized and destroyed to “stop the spread of the virus.”

Cops are already harassing peaceful citizens who don’t wear a mask. What will happen as the COVID cult agenda reaches its conclusion?

We hope it never gets to this point, but sad to say it’s important not to underestimate the scale of sheer evil that is behind the NWO and the COVID cult. Extermination is mass murder; the ultimate way to shut down all dissent and opposition to tyranny.

Dr. Stanton notes there is a final stage: denial. This includes hiding the evidence, murdering the witnesses and blaming the victims. In the context of the COVID cult, teachers would reinforce the lie, and cement the dehumanization, by telling children that physical touch can injure or kill, despite the obvious truth that human touch is an innate human need.

Final Thoughts on the COVID Cult and Its Implications

This is a warning of what could take place (in the hopes that it can be averted), not as a prediction of what will occur. This information underpins the need all the more for us to fully humanize (not dehumanize) in the face of the COVID cult, which like the NWO itself, is a decidedly anti-human agenda.

It also underpins the need for us to come together regardless of petty differences, and refuse to participate any more in the dichotomy (us vs. them) that is being foisted upon us.

Every single person on Earth has a choice to make. Will we dutifully wear the mask at all times, get the shot (the COVID vaccine which is NOT merely a vaccine) and ultimately accept the microchip or nanochip? Or will we stand for our freedom and autonomy?

The COVID agenda is already forcing us to choose a side, and so much is riding on our choice: not only our own and next generation’s future, but the future of all humanity on Earth.

Evidence of Genocide: The Mask Psyop

Tactics used by the MSM to manufacture consent for the oligarchy

Big Tech pouring billions into harvesting blood of the young…

What do mandatory vaccination and forced sterilization have…

Edward Snowden: ‘Be careful because some aspects that are…