As some of you know, I’m an aficionado of ancient history. I thought it might be worthwhile to discuss what happened to Rome and based on that, what’s likely to happen to the U.S.

Spoiler alert: There are some similarities between the U.S. and Rome. 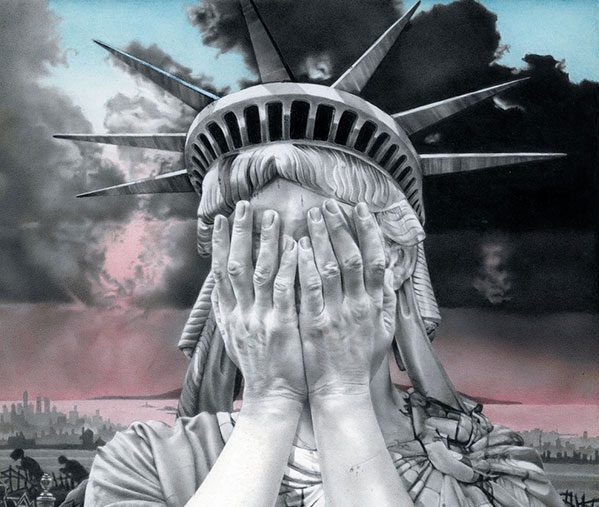 There are good reasons for looking to Rome rather than any other civilization when pursuing to see where the U.S. is headed. Everyone knows Rome declined, but few people understand why. And, I think, even fewer realize that the U.S. is now well along the same path for pretty much the same reasons, which I’ll explore shortly.

Rome reached its peak of military power around the year 107, when Trajan completed the conquest of Dacia (the territory of modern Romania). With Dacia, the empire peaked in size, but I’d argue it was already past its peak by almost every other measure.

The U.S. reached its peak relative to the world, and in some ways its absolute peak, as early as the 1950s. In 1950 this country produced 50% of the world’s GNP and 80% of its vehicles. Now it’s about 21% of world GNP and 5% of its vehicles. It owned two-thirds of the world’s gold reserves; now it holds one-fourth. It was, by a huge margin, the world’s biggest creditor, whereas now it’s the biggest debtor by a huge margin. The income of the average American was by far the highest in the world; today it ranks about eighth, and it’s slipping.

But it’s not just the U.S.—it’s Western civilization that’s in decline. In 1910 Europe controlled almost the whole world—politically, financially, and militarily. Now it’s becoming a Disneyland with real buildings and a petting zoo for the Chinese. It’s even further down the slippery slope than the U.S.

Like America, Rome was founded by refugees—from Troy, at least in myth. Like America, it was ruled by kings in its early history. Later, Romans became self-governing, with several Assemblies and a Senate. Later still, power devolved to the executive, which was likely not an accident.

U.S. founders modeled the country on Rome, all the way down to the architecture of government buildings, the use of the eagle as the national bird, the use of Latin mottos, and the unfortunate use of the fasces—the axe surrounded by rods—as a symbol of state power. Publius, the pseudonymous author of The Federalist Papers, took his name from one of Rome’s first consuls. As it was in Rome, military prowess is at the center of the national identity of the U.S. When you adopt a model in earnest, you grow to resemble it.

A considerable cottage industry has developed comparing ancient and modern times since Edward Gibbon published The Decline and Fall of the Roman Empire in 1776—the same year as Adam Smith’s Wealth of Nations and the U.S. Declaration of Independence were written. I’m a big fan of all three, but D&F is not only a great history, it’s very elegant and readable literature. And it’s actually a laugh riot; Gibbon had a subtle wit.

There have been huge advances in our understanding of Rome since Gibbon’s time, driven by archeological discoveries. There were many aspects he just didn’t know, because he was as much a philologist as an historian, and he based his writing on what the ancients said about themselves.

There was no real science of archeology when Gibbon wrote; little had been done even to correlate the surviving ancient texts with what was on the surviving monuments—even the well-known monuments—and on the coins. Not to mention scientists digging around in the provinces for what was left of Roman villas, battle sites, and so on. Therefore Gibbon, like most historians, was to a degree a collector of hearsay.

And how could he know whom to believe among the ancient sources? It’s as though William F. Buckley, Gore Vidal, H. L. Mencken, Norman Mailer, and George Carlin all wrote about the same event, and you were left to figure out whose story was true. That would make it tough to tell what really happened just a few years ago… forget about ancient history. That’s why the study of history is so tendentious; so much of it is “he said/she said.”

In any event, perhaps you don’t want a lecture on ancient history. You’d probably be more entertained by some guesses about what’s likely to occur to the U.S. I’ve got some.

Let me start by saying that I’m not sure the collapse of Rome wasn’t a good occurrence. There were many beneficial aspects to Rome—as there are to most civilizations. But there was much else to Rome of which I disapprove, such as its anti-commercialism, its militarism and, post-Caesar, its centralized and increasingly totalitarian government. In that light, it’s worth considering whether the collapse of the U.S. might not be a good occurrence.

So why did Rome fall? In 1985, a German named Demandt assembled 210 reasons. Some of them include racial degeneration, homosexuality, and “excessive freedom”. Most are redundant. Some are just common sense—like bankruptcy, loss of moral fiber, and corruption. 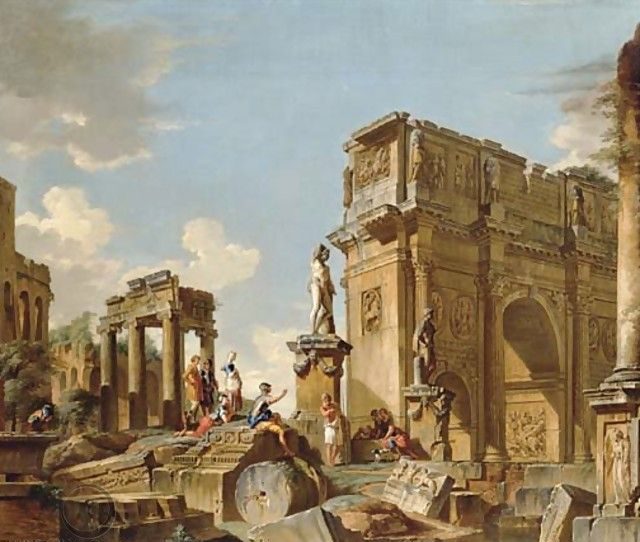 Gibbon’s list is much shorter. Although it’s pretty hard to summarize his six fat volumes in a single sentence, he attributed the fall of Rome to just two causes, one internal and one external: religion and barbarian invasions, respectively. I think Gibbon was essentially right about both.

While accepting Gibbon’s basic ideas on religion and barbarians, I decided to break down the reasons for Rome’s decline further, into 10 categories: political, legal, social, demographic, ecological, military, psychological, intellectual, religious, and economic—all of which I’ll touch on. And, as a bonus, toward the end of this article, I’ll give you another, completely unrelated, and extremely important reason for the collapse of both Rome and the U.S.

You don’t have to agree with my interpretation, but let’s see what lessons are on offer from the history of Rome, from its semi-mythical founding by Romulus and Remus in 753 BCE (a story that conflicts with Virgil’s tale of Aeneas and the refugee Trojans) to what’s conventionally designated as the end of the Western empire in 476 AD, when the child-emperor Romulus Augustulus was deposed by Odoacer (a Germanic general who was in charge of what passed for the Roman army—which by then was staffed almost entirely with Germanic mercenaries who had no loyalty to the idea of Rome). It looks a lot like the American experience over the last couple of hundred years. First conquest and expansion, then global dominance, and then slippage into decline.

It’s somewhat misleading, however, to talk about a simple fall of Rome, and much more accurate to talk about its gradual transformation, with episodes of what paleontologists describe as “punctuated disequilibrium.” There were many falls.

Republican Rome fell in 31 BCE with the accession of Augustus and the start of what’s called the Principate. It almost disintegrated in the 50 years of the mid-3rd century, a time of constant civil war, the start of serious barbarian incursions, and the destruction of Rome’s silver currency, the denarius.

Rome, as anything resembling a free society, fell in the 290s and then changed radically again, with Diocletian and the Dominate period (more on this shortly). Maybe the end came in 378, when the Goths destroyed a Roman army at Adrianople and wholesale invasions began. Maybe we should call 410 the end, when Alaric—a Goth who was actually a Roman general—conducted the first sacking of Rome.

It might be said the civilization didn’t really collapse until the late 600s, when Islam conquered the Middle East and North Africa and cut off Mediterranean commerce. Maybe we should use 1453, when Constantinople and the Eastern Empire fell. Maybe the Empire is still alive today in the form of the Catholic Church—the Pope is the Pontifex Maximus wearing red slippers, as did Julius Caesar when he held that position.

One certain reflection in the distant mirror is that beginning with the Principate period, Rome underwent an accelerating trend toward absolutism, centralization, totalitarianism, and bureaucracy. I think we can argue America entered its Principate with the accession of Roosevelt in 1933; since then, the president has reigned supreme over the Congress, as Augustus did over the Senate. Pretenses fell off increasingly over time in Rome, just as they have in the U.S.

After the third century, with constant civil war and the destruction of the currency, the Principate (when the emperor, at least in theory, was just the first among equals) gave way to the Dominate period (from the word dominus, or lord, referring to a master of slaves), when the emperor became an absolute monarch. This took place with the ascension of Diocletian in 284 and then, after another civil war, Constantine in 306. From that point forward, the emperor no longer even pretended to be the first among equals and was treated as an oriental potentate. The same trend is in motion in the U.S, but we’re still a ways from reaching its endpoint—although it has to be noted that the president is now protected by hundreds, even thousands, of bodyguards. Harry Truman was the last president who actually dared to go out and informally stroll about DC, like a common citizen, while in office.

In any event, just as the Senate, the consuls, and the tribunes with their vetoes became impotent anachronisms, so have U.S. institutions. Early on, starting with the fourth emperor, Claudius, in 41 AD, the Praetorians (who had been set up by Augustus) showed they could designate the emperor. And today in the U.S., that’s probably true of its praetorians—the NSA, CIA, and FBI, among others—and of course the military. We’ll see how the next hanging-chad presidential election dispute gets settled.

My guess is that the sheeple (the Romans called them the capite censi, or head count) will demand a strong leader as the Greater Depression evolves, the dollar is destroyed, and a serious war gets underway. You have to remember that war has always been the health of the state. The Roman emperors were expected, not least by their soldiers, to always be engaged in war. And it’s no accident that the so-called greatest U.S. presidents were war presidents—Lincoln, Wilson, and FDR. And let’s not forget the self-proclaimed war president Baby Bush. Military heroes—like Washington, Andrew Jackson, Ulysses Grant, Teddy Roosevelt, and Eisenhower—are always easy to elect. My guess is that a general will run for office in the next election, when we’ll be in a genuine crisis. The public will want a general partly because the military is now by far the most trusted institution of U.S. society. His likely election will be a mistake for numerous reasons, not least that the military is really just a heavily armed variant of the postal service.

It’s wise to remember Gibbon’s words about the military: “Any order of men accustomed to violence and slavery make for very poor guardians of a civil constitution.”