Golden ratio in the human body 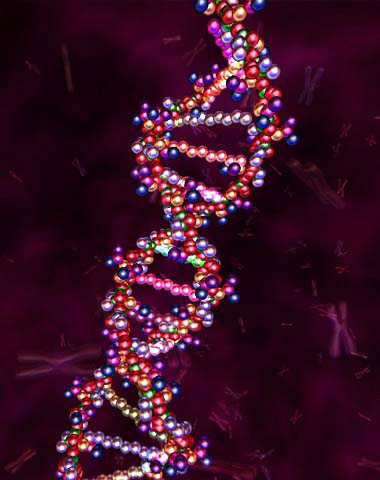 * The DNA molecule storing all life characteristics is made of two spiral strands coiled around each other measuring 34 angstroms in length and 21 angstroms in width, the length-width ratio being very close to Phi (the golden number).

* If we split the 0-100 degrees Celsius interval – corresponding to water’s solidification and boiling point – by the golden ratio we get the approximate value of 38,1 degrees C which is the temperature of inner organs inside the body, in other words the temperature that water has inside a living human organism.

* In many of the human fingerprints there are curves resembling to the logarithmic spiral. This is where we hear the often mentioned metaphor stating that the golden ratio is “God’s signature in creation”.

* The golden ratio is found in the heart activity in the ratio between the systolic and diastolic blood pressure that is close to 1,61 (value of the golden number).

* The electrocardiographic recorded cycle waves apparently disguise the golden ratio as well. The EKG is the graphic recording of the heart’s electric activity. The differences of potential generated by the myocardium reach the surface of the body where they can be measured with electrodes placed on the surface of the skin. In the idle state, the myocardium cell’s membrane is electrically polarized as positive on the outside and negative inside the cells. Through depolarization we mean inverting the membrane’s electrical charge (due to ionic exchange) together with the occurrence of the so called potentials of action (the muscle contracts). Coming back from the depolarization state to the electrically polarized state from the idle state is called repolarization. Each cardiac cycle produces 3 different electric waves called P, QRS and T. P wave corresponds to the atrial activation (depolarization spread through the atrial myocardium), the Q, R, S waves form the ventricular activation complex (depolarization conduction through the ventricular myocardium) and the T wave represents the ventricle repolarization. The atrium repolarization takes place simultaneously with QRS but is masked by the ventricle depolarization’s amplitude. The aspect of the EKG varies considerable in connection with a range of factors. Some cardiologists say that positioning the T wave in the golden section of the cardiac cycle reflects a state of health and harmony.

Dentition also respects the golden ratio that is generally found in the ratio between the central and lateral incisors’ widths. Also the rectangle outlining the two central incisors is a golden rectangle. 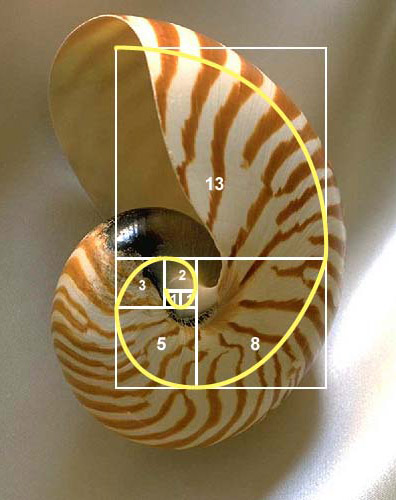 Fibonacci (1170-1240) is considered as one of the greatest European mathematicians of the Middle Ages. He was born in Pisa, an Italian city famous for its inclined tower that looks as if it’s about to collapse. His father was a customs office in the northern African town called Bougie so Fibonacci grew up in the middle of the north-African civilization, however travelling many times to the Mediterranean coasts.

The Fibonacci sequence is a series of numbers where each number is obtained summing the previous two in the series. The first ten numbers of the Fibonacci sequence are: 1, 1, 2, 3, 5, 8, 13, 21, 34 and 55. The Fibonacci sequence refers to the metaphysical explanations regarding the codes inside our universe. The Fibonacci numbers are actually considered nature’s numbering system, a way of measuring the Divinity. These numbers show up everywhere in nature, starting from the leaves’ arrangement to the pattern of a flower’s petals and going to the phalanges of the human hand and the proportions of the famous pyramids in Egypt. There is a connection between the natural grow of plants and the golden number. The mysterious proportion of this number is represented by Pythagoras’s golden triangle (isosceles) the golden ellipse from the Hindu tradition or the golden spiral that keeps the 1,618 proportion through Fibonacci’s sequence.

We also find other things in nature that respect this perfect proportion such as: the water generated spiral (water whirls), the spiral movement of air currents, the snail shell, the rose petals leaves or the seeds arrangement in the vegetal life etc. showing that this proportion is respected in the entire creation. Probably this is why it’s being called the “formula of happiness”. The all-around presence of this golden ratio demonstrates the existence of a harmony and beauty awareness sphere that exists in the whole universe, guiding it.

In the esoteric circles it is said that together the ten numbers sum up to form this message: “In the 21st century in these evolution times humankind will know enlightenment” so the Code states that in this era humanity will transform its perception. All that humans tried during time will finally find a resolution. This resolution would include all life principles including the way we relate to another. It is said that these ten “random simple to the absurd” numbers would represent a numerical anagram. Giving back to the number sequence its numerological meaning, we have ten numbers, we see the significance of it, the number 10 being an end in itself, it’s a return to the center to unity to a new begging and self-accomplish. Ten is a result, a realization, this number includes and contains all previous ones representing a cycle and forming at its turn the beginning of a new cycle being the glorious principle of all natural cycles, we can think of the ten fingers, the tree of life and the fountain of youth.

In spirituality being considered an endless cycle it is also said that the Fibonacci sequence would be a key resembling to a five-petal rose. The pentagram of the five-petal rose is an extraordinary sacred symbol generated through bringing together all five basic elements: earth, water, fire, air and celestial ether. The number five symbolizes the center, harmony and balance.

The golden number, ɸ, is strongly connected to the Fibonacci sequence where each number is the sum of the previous ones (1, 1, 2, 3, 5, 8, 13, 21, 34, 55…). While we move forward the ratio between two consecutive elements of the Fibonacci sequence converges to ɸ (1,618). The golden number, the divine section is a well-known number in arts, having its fundamental origins in nature. If we replace the letters PHI with the correspondent numbers in numerology we get 781 which is 7 if we sum the numbers altogether. Summing that to 1618 we also get 7 that is considered to be the most beautiful number in the Universe the number of perfection the number of God. There are seven days a week, seven musical notes, seven fundamental energetical centers in the human being, seven colors of the rainbow, Noah took seven pairs of the Earth’s birds on his arch; the number 7 appears 77 times in the Old Testament and represents the key to the New Testament referring to the seven seals, seven angels, seven churches, seven trumpets, seven signs and seven arks.

About the secret of the pyramids a lot has been written observing that the axis alignment is precisely centered with the North Star from that age: the angle measured referring to the Alfa star of the Dragon representing the geographic North is 4 minutes and the four sides are oriented towards North East South and West with the same precision. The height of the pyramid multiplied by a billion represents the Earth-Sun distance (150 million km). The perimeter of the base split by its height is 2 π (Pi) the double of 3,14 that could be verified only after 1670 by Leibnitz. The ratio between the apothem and the base of the triangles is 1,618 – the golden number.

Just like the golden section is found in the entire beauty of nature, it can be also used to reach beauty and balance in art. The golden section was intensely used by Leonardo da Vinci. Observe how the key dimensions of the room and table in “The Last Supper” painting by da Vinci were based on the golden section that was known in the Renaissance age as the “Divine Proportion”.

In “The Sacrament of the Last Supper” Salvador Dali framed his painting in a golden rectangle. Following da Vinci’s technique, Dali placed the table right at the golden section of the height of his painting. He placed the two disciples along Jesus’ side to the golden sections of the composition’s width. Plus the background windows are formed of 12 pentagons that express the ɸ relations in their proportions.

A Short Introduction in the Art of Caressing (I)