The Holographic Pyramid and The Celestial Path in Ceahlau – Wonders of Nature or Traces of the Dacian Civilization?


Every year, at the beginning of August, two spectacular optical phenomena, rare in the world and unique in Romania, fill the beings of those who are at sunrise on Toaca peak in the Ceahlău mountains, with beauty, magic and sacredness. 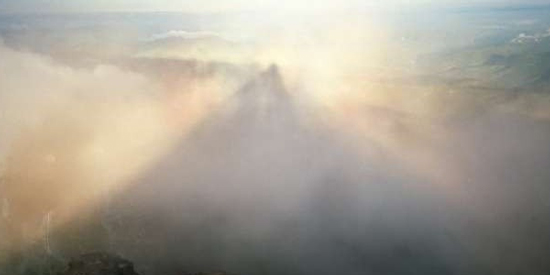 One of the most amazing surprises offered by nature is a genuine, magnificent, and giant three-dimensional shadow projected over Bistricioara Valley. Over time, the observers of the phenomenon called it The Shadow of the Pyramid, The Space Shadow or The Holographic Pyramid. They found that the shape of pyramid becomes perfect every year on August 6, 49 days after the summer solstice. 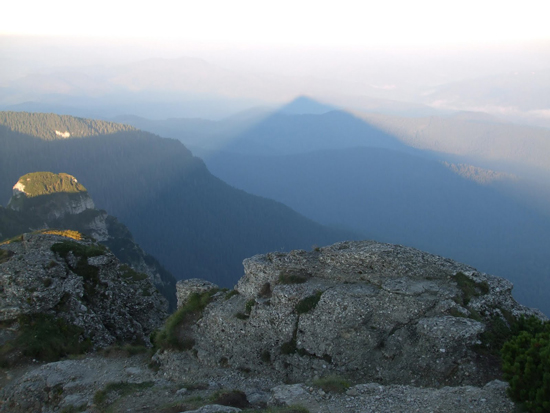 The perfect pyramid shadow arises that day due to the blending of the shadows of rock formations in the area. Under the sun rays coming from the East, Toaca peak has the shape of an isosceles triangle, as in any other morning of the year. 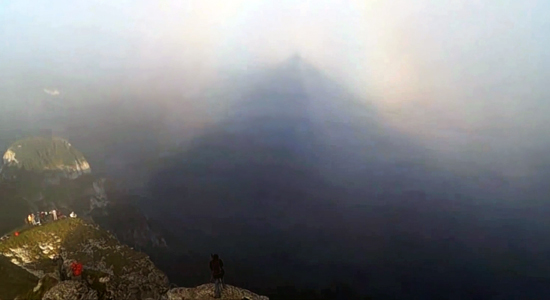 The rocks Piatra Ciobanului, Piatra Vulcanului and Panghia, situated at a lower altitude, and smaller than Toaca peak, have long shadows instead. The phenomenon lasts for more than 80 minutes; the holographic pyramid flattens and finally disappears as the sun climbs into the sky.

The observers of the magical phenomenon found that in order for it to happen, certain conditions have to be met:

– the sun must rise in a certain position so that the shadows mentioned above overlap perfectly;
– the eastern part of the sky, where the sun rises, should be blue, without clouds that might obstruct the rays of light, so that the shadows can be formed;
– there must be a ’’projection screen”: the space where the three-dimensional image is formed should be charged with aerosol particles (fine solid particles) and water suspension (fog, clouds), having a density that enables the passage of light.

The hologram is completely special when fluorescence also occurs  (when the sun emits ultraviolet radiation), so that the composite image is blue and the faces of the pyramid have different shades.

The phenomenon was photographed or filmed on the days prior or following the date of August 6. A movement of the shadows has been observed that, depending on the movement of the east point, join and then separate.

Sometimes, even on other days of the year, refraction of sunlight occurs around the formations on Toaca peak – thus the image of the person watching the phenomenon also appears, wrapped in a multi-coloured aura, like a rainbow ball. 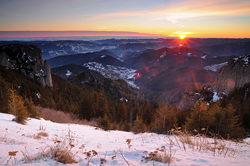 Even if the phenomenon in itself is explained by the Laws of Optics, there are related issues that have not yet been explained. Toaca peak, through its shape, location and dimensions represent a mystery in itself. It has the appearance of a pyramid with a square base, the natural formation of which occurs very rarely.

The appearance, the dimensions and the position of the forms of relief which determine the shadows to blend so accurately, at the exact moment when the sun rises, on the day when the Dacians were celebrating the Sun, made those who looked into the phenomenon to wonder whether there is a relationship between the Dacian sanctuary that is believed to have existed on the Ceahlău mountain and the hologram. Questions also arose as to whether the ancient inhabitants of these lands shaped the mountain so that the optical phenomenon be perfect.

The astronomical, geometric (Toaca peak and the rocks are placed in exactly the right points), meteorological (the season when the weather conditions are perfect so that the optic phenomenon might take place) conditions, geologic studies, as well as legends saying that mount Ceahlău was created after a celestial command, gave rise to the idea that the mountain may not have been created by nature.

In the same calendar period another optical, a more mysterious and more uplifting phenomenon occurs. As a result of the game of light and shadows during the first minutes of sunrise, the shadow of Toaca peak is projected on the sky in the form of a column of light as though as squeezing out of the mountain and is lost in the infinite sky.

In that short period of time it is as though a holy road, a road of light, a celestial path is opened. Some researchers explain the appearance of this “path” by the fact that through Toaca peak passes one of the energetic pillars of planet Earth. 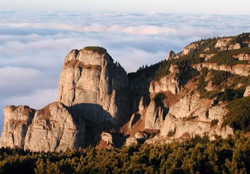 These mysterious phenomena, these sui generis hierophanies represent one of the reasons why mount Ceahlău was considered by the Dacians a temple-like, sacred place, as if it were a gate of communication with the Divine.

It has remained until today a holy mountain, a pilgrimage place, being the only mountain in Romania with a patron saint. It is celebrated on August 6, on the day the Dacians were celebrating the Sun, the light, the Divine, when in the Christian Calendar the Transfiguration of our Lord Jesus Christ is celebrated.

The holy mountain is fascinating for today’s Romanians, too. According to the local press, in August 2014 over two thousand tourists climbed mount Ceahlău to watch delightfully the mysterious phenomena.

According to a popular legend between those who meet on mount Ceahlău subtle connections are established forever. Another legend says that in ancient times shepherds did not climb above a certain altitude in order not to disturb the saints who supposedly lived on top of the mountain.

The Octopus Theory: Speculation that tries to cover mass-media lies (1)