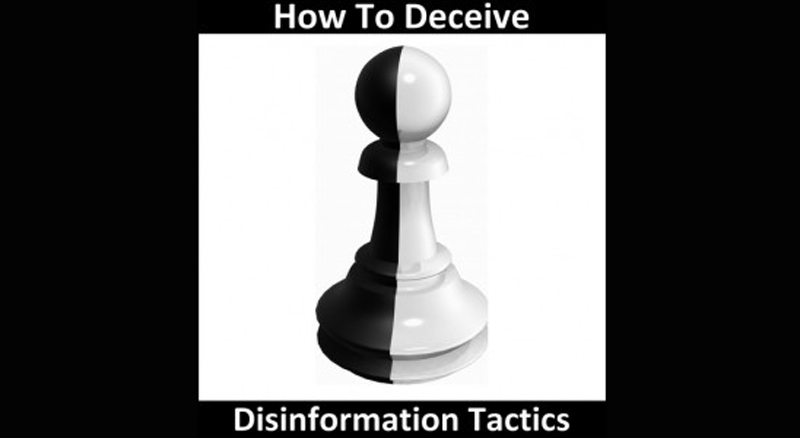 Operation Mockingbird historically is a secret Central Intelligence Agency (CIA) campaign to influence media to promote false propaganda or print misleading stories.
However, the program has evolved into a new brand of media control using the Internet to spread any propaganda seeming beneficial to the current political climate.
Agents create fake user accounts on social media platforms, such as Facebook, Twitter and others, to argue any ideology they are instructed to.

According to RT news, agents have up to “10 fake shill accounts” used to troll and create the illusion of having a genuine network of friends.
“They will defend current administration decisions with relentless irrational stubbornness that one can only be paid to do.”

1. Hear no evil, see no evil, speak no evil. Regardless of what you know, don’t discuss it – especially if you are a public figure, news anchor, etc. If it’s not reported, it didn’t happen, and you never have to deal with the issues.

2. Become incredulous and indignant. Avoid discussing key issues and instead focus on side issues which can be used. Show the topic as being critical of some otherwise sacrosanct group or theme. This is also known as the “How dare you!” gambit.

3. Create rumor mongers. Avoid discussing issues by describing all charges, regardless of venue or evidence, as mere rumors and wild accusations. Other derogatory terms mutually exclusive of truth may work as well. This method works especially well with a silent press, because the only way the public can learn of the facts is through such “arguable rumors”.
If you can associate the material with the Internet, use this fact to certify it a “wild rumor” which can have no basis in fact.

4. Use a straw man. Find or create a seeming element of your opponent’s argument which you can easily knock down to make yourself look good and the opponent to look bad.
Either make up an issue you may safely imply exists based on your interpretation of the opponent/ opponent’s arguments/ situation, or select the weakest aspect of the weakest charges. Amplify their significance and destroy them in a way which appears to debunk all the charges, real and fabricated alike, while actually avoiding discussion of the real issues.

5. Sidetrack opponents with name calling and ridicule. This is also known as the primary “attack the messenger” ploy, though other methods qualify as variants of that approach. Associate opponents with unpopular titles such as “kooks”, “right-wing”, “liberal”, “left-wing”, “terrorists”, “conspiracy buffs”, “radicals”, “militia”, “racists”, “religious fanatics”, “sexual deviants”, and so forth. This makes others shrink from support out of fear of gaining the same label, and you avoid dealing with issues.

6. Hit and run. In any public forum, make a brief attack of your opponent or the opponent position and then scamper off before an answer can be fielded, or simply ignore any answer.
This works extremely well in Internet and letters-to-the-editor environments where a steady stream of new identities can be called upon without having to explain critical reasoning – simply make an accusation or other attack, never discussing issues, and never answering any subsequent response, for that would dignify the opponent’s viewpoint.

7. Question motive. Twist or amplify any fact which could be taken to imply that the opponent operates out of a hidden personal agenda or other bias. This avoids discussing issues and forces the accuser on the defensive.

8. Invoke authority. Claim for yourself or associate yourself with authority and present your argument with enough “jargon” and “minutiae” to illustrate you are “one who knows”, and simply say it isn’t so without discussing issues or demonstrating concretely why or citing sources.

9. Play dumb. No matter what evidence or logical argument is offered, avoid discussing issues with denial they have any credibility, make any sense, provide any proof, contain or make a point, have logic, or support a conclusion.
Mix well for maximum effect. 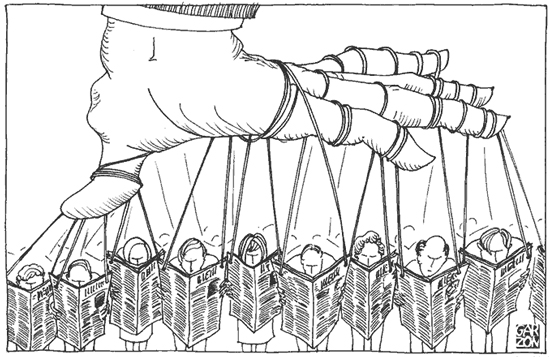 10. Associate opponent charges with old news. A derivative of the “straw man” usually, in any large-scale matter of high visibility, someone will make charges early on which can be or were already easily dealt with. Where it can be foreseen, have your own side raise a “straw man” issue and have it dealt with early on as part of the initial contingency plans. Subsequent charges, regardless of validity or new ground uncovered, can usually then be associated with the original charge and dismissed as simply being a rehash without need to address current issues – so much the better where the opponent is or was involved with the original source.

11. Establish and rely upon fallback positions. Using a minor matter or element of the facts, take the “high road” and “confess” with candor that some innocent mistake, in hindsight, was made – but that opponents have seized on the opportunity to blow it all out of proportion and imply greater criminality which, “just isn’t so”.
Others can reinforce this on your behalf, later. Done properly, this can garner sympathy and respect for “coming clean” and “owning up” to your mistakes without addressing more serious issues.

12. Enigmas that have no solution. Drawing upon the overall umbrella of events surrounding the crime and the multitude of players and events, paint the entire affair as too complex to solve. This causes those otherwise following the matter to begin to lose interest more quickly without having to address the actual issues.

13. Alice in Wonderland logic. Avoid discussion of the issues by reasoning backwards with an apparent deductive logic in a way that forbears any actual material fact.

14. Demand complete solutions. Avoid the issues by requiring opponents to solve the crime at hand completely, a ploy which works best for items qualifying for rule 10.

15. Fit the facts to alternate conclusions. This requires creative thinking unless the crime was planned with contingency conclusions in place.

16. Vanishing evidence and witnesses. If it does not exist, it is not a fact, and you won’t have to address the issue.

17. Change the subject. Usually in connection with one of the other ploys listed here, find a way to side-track the discussion with abrasive or controversial comments in hopes of turning attention to a new, more manageable topic.
This works especially well with companions who can “argue” with you over the new topic and polarize the discussion arena in order to avoid discussing more key issues.

18. Emotionalize, antagonize, and goad opponents. If you can’t do anything else, chide and taunt your opponents and draw them into emotional responses which will tend to make them look foolish and overly motivated, and generally render their material somewhat less coherent. Not only will you avoid discussing the issues in the first instance, but even if their emotional response addresses the issue, you can further avoid the issues by then focusing on how “sensitive they are to criticism”.

19. Ignore proof presented, demand impossible proofs. This is perhaps a variant of the “play dumb” rule. Regardless of what material may be presented by an opponent in public forums, claim the material irrelevant and demand proof that is impossible for the opponent to come by (it may exist, but not be at his disposal, or it may be something which is known to be safely destroyed or withheld, such as a murder weapon).
In order to completely avoid discussing issues may require you to categorically deny and be critical of media or books as valid sources, deny that witnesses are acceptable, or even deny that statements made by government or other authorities have any meaning or relevance.

20. False evidence. Whenever possible, introduce new facts or clues designed and manufactured to conflict with opponent presentations as useful tools to neutralize sensitive issues or impede resolution. This works best when the crime was designed with contingencies for the purpose, and the facts cannot be easily separated from the fabrications.

21. Call a Grand Jury, Special Prosecutor, or other empowered investigative body. Subvert the (process) to your benefit and effectively neutralize all sensitive issues without open discussion. Once convened, the evidence and testimony are required to be secret when properly handled.
For instance, if you own the prosecuting attorney, it can ensure a Grand Jury hears no useful evidence and that the evidence is sealed and unavailable to subsequent investigators. Once a favorable verdict (usually, this technique is applied to find the guilty innocent, but it can also be used to obtain charges when seeking to frame a victim) is achieved, the matter can be considered officially closed.

22. Manufacture a new truth. Create your own expert(s), group(s), author(s), leader(s) or influence existing ones willing to forge new ground via scientific, investigative, or social research or testimony which concludes favorably. In this way, if you must actually address issues, you can do so authoritatively.

23. Create bigger distractions. If the above does not seem to be working to distract from sensitive issues, or to prevent unwanted media coverage of unstoppable events such as trials, create bigger news stories (or treat them as such) to distract the multitudes.

24. Silence critics. If the above methods do not prevail, consider removing opponents from circulation by some definitive solution so that the need to address issues is removed entirely.
This can be by their death, arrest and detention, blackmail or destruction of their character by release of blackmail information, or merely by proper intimidation with blackmail or other threats.

25. Vanish. If you are a key holder of secrets or otherwise overly illuminated and you think the heat is getting too hot, to avoid the issues, vacate the kitchen.

Are You Chatting With a CIA Agent On-Line? It’s Possible You May Already Have

Abby Martin, from RT’s Breaking the Set, reported on an up-to-date Operation Mockingbird with the sole purpose of misleading the public online.

In the congressional hearing from 1976 (below) listen to how many agents are in the media to write false stories.
According to the Congress report published in 1976:
“The CIA currently maintains a network of several hundred foreign individuals around the world who provide intelligence for the CIA and at times attempt to influence opinion through the use of covert propaganda.
These individuals provide the CIA with direct access to a large number of newspapers and periodicals, scores of press services and news agencies, radio and television stations, commercial book publishers, and other foreign media outlets.”

According to Nina Burleigh (A Very Private Woman), these journalists sometimes wrote articles that were commissioned by Frank Wisner, creator of the program. The CIA also provided them with classified information to help them with their work.

17 Quotes That Teach Us To Believe In The Unseen