The meaning of her name. The primordial sound

Etymologically, the word Tara means “savior” or “liberator” and it comes from the Sanskrit root ‘tri’, referring to crossing over (over something), such as crossing a river, a sea, and mountain or overcoming any difficult situation. Therefore, in an exoteric approach, we can say that the great goddess Tara is always invoked when faced with dangerous situations, sometimes at the limit or when we must decide in favor of one of the more possibilities we have available (for example, when we are at a crossroads and not sure which way to go forward, or when we must decide on a destination out of more options.). On the other hand, in terms of esoteric (i.e. in terms of the initiate, occult) Tara represents the knowledge that saves. Thus, the deep significance of the goddess in her aspect of a Savior is that she gives to her deserving disciples the boundless divine wisdom, which frees them from the chains of samsara suffering (i.e. the chain of successive incarnations in Manifestation).

Another meaning of the word Tara is that of a “star”, in the sense that the Great Cosmic Power is like the star of our frantic aspiration to God. Therefore, she is the one who inspires and guides us on the complicated path of spiritual perfection.

The primordial sound
As a perfect power of the subtle sound (shabda shakti), Tara corresponds to Kali who represents the power of time and transformation. Word (logos) and time (transformation) are closely linked. Indeed, we can understand intuitively that Logos is like an awareness of time, and time is nothing but a kind of “movement” of the Word. Essentially speaking, the Divine Logos (which is an endless and ecstatic creative vibration) is nothing but the foundation of the emergence and the differentiated manifestation of the subtle energy of time.

Another important aspect in the action of the Great Cosmic Power Tara at the level of the human microcosm is that the goddess also represents the purifying force of the subtle prana breaths which animate any living human being. As the undifferentiated universal subtle breath (prana), the subtle sound (shabda) is manifested in the ubiquitous ether (akasha).
Of course, in this aspect ether does not represent the notion in Physics, which refers only to a simple propagation environment (as, for example, cosmic ether), but it is much more than that, because it has a luminous subtle nature and it is the endless space of consciousness itself, out of which appear and then are reabsorbed into all things, beings and phenomena of Manifestation. As far as the prana breaths are concerned, we can say that the breath of every human being is “the primordial sound of life” because it is like an ineffable song that continuously supports the vital element in the human being concerned. 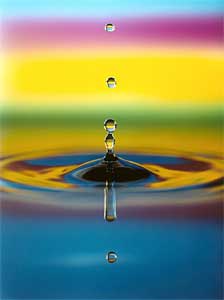 The spiritual tradition of India has identified since time immemorial this subtle sound of the human breath as the famous mantra SO-HAM, which is emitted spontaneously, continuously and in a subtle way (i.e. without being explicit at the discursive speech level, as it is shown in the approximate description above). Both mind and prana, through their particular forms of expression, which are respectively the word and energetic vibration, have their source in the macrocosmic subtle sound (shabda), which essentially is displayed through mantra-s. We will now understand better the extremely important significance of the use of mantra-s in the daily sadhana (spiritual practice), because they (mantra-s) purify, energize and elevate the mind and the aspirant’s whole being, offering him eventually the spiritual liberation. In this process of evolution and perfection of his various psycho-mental aspects, the aspirant who is firm and persevering in his spiritual training, invokes Tara lovingly and devoutly, the one who guides him with great compassion and finally gives him the liberating grace of the divine transcendence. As it is known, the sound (in its coarse or subtle form) is basically a complex manifestation of the subtle prana, meaning of the subtle and universal life force. From this perspective, we can say that breath is actually the first sound of life, which drives, supports and nourishes afterwards all the actions and a human being’s way of manifestation. Therefore, the deep relationship that is established between sound, word, prana and mind is a direct result of the action of Tara in Manifestation. This highly complex action is found also in the knowledge that comes from different meanings of words, sound. We know that different sounds, when combined, are the “vehicle” manifesting our ideas and thoughts. We also know that the primordial divine sound (to which the tradition of Hindu spirituality refers as pranava) is the substrate or the foundation that makes possible the emergence and manifestation of all these sounds and the meanings and significances involved in their combinations. But there are numerous meanings with the purpose to only reintegrate ourselves as divine individual drops in the infinite ocean of Supreme Consciousness, which is God the Father.

Hymns of praise dedicated to Tara