The miracle gift from the Archangels

The image you can admire below is a screenshot from a little movie posted on the internet: it can be noted behind the actor the emergence of an angelic entity, much higher than the actor’s shadow. The angelic entity is similar to the traditional depictions (a being of light similar to humans, but endowed with wings); It seems to be easily bent forward in a protective manner. This appearance cannot be justified as a projection, or transparency etc., it is clearly a genuine miraculous manifestation. 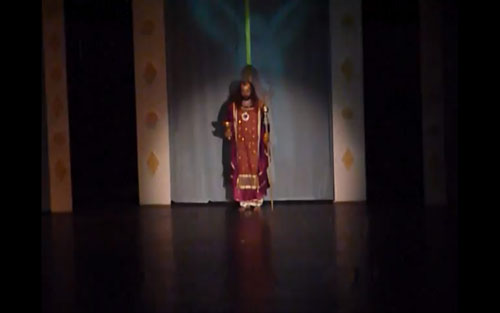 On Monday, October 31, 2011, the Palace Hall hosted the show “the gift of Archangels” organized by the Anima Mundi Association. This show is part of the series of events proposed by various associations in the country under the auspices of the “Archangels Week”. “Archangels Week” intended and even succeeded to offer a great, beneficial, delightful, spiritual alternative, to the weird events that seem to proliferate in our country in recent years, associated with the so-called “holiday” of Halloween.

The show “The gift of Archangels” was filmed by multiple people-one of them posted on the internet a clearly amateur recording on which she, without being aware of it, captured the angelic miraculous manifestation shown in the image above. Thus, when on the stage there is the actor who had in the show the role of Archangel Zadakiel, on the film, and among the sparks of the blitz, we can clearly see the luminous miraculous manifestation of an angelic entity very similar to their traditional representation, like a human being endowed with wings. This miraculous manifestation lasted for about 5 seconds. To fully enjoy this true miracle, we provide a video montage that repeats more times the sequence in which that angelic luminous entity appears.

This miracle attests to the ones with an open soul the fact that the Archangels respond promptly when they are called with love by a human being whose heart is pure and open to their mysterious reality. The actor (amateur) who played the role of Archangel Zadakiel is called Doru Bodea; he is a yoga practitioner and also a yoga instructor in Berlin. I’ve asked him to share in a few words, for the readers of Yogaesoteric, his personal experience that he lived during that show. Here’s what he tells us: “Every time when I was on stage in this posture, representing the Archangel Zadakiel, I noted firstly a nearly perfect continuity of the state of consciousness that I was perceiving. A state of deep mental tranquility, doubled by an extremely vivid “presence”, sometimes almost overwhelming physically. I also felt that this mental silence was a form of help for me, a protection that this Archangel was providing through his great kindness. As an individual manifestation, the most intense state of communion with Archangel Zadakiel I felt during the show at the Sala Palatului. An aspect that was different in that evening to the previous evenings was how I felt the reaction of the public, maybe also due to the fact that the public was much more numerous than before. But what I noticed was, I think, much more than that. It was a graduation in this reaction, an increase from one artistic moment to another, both in the quality of the state of the audience, and in the intensity of this state. Yet before I entered the stage I was deeply moved by this participation, which I felt both emotionally, and especially spiritually. I felt for the first time in these shows, the call of the public. And this not like an “actor”, but simply as a manifestation of our desire, everybody present there, conscious or not yet, to be embraced by the sublime sphere of force of Archangel Zadakiel. Then there followed those minutes when I was on stage, overwhelming minutes, marked by an inner zest towards everything divine, towards everything elevated, by an intense aspiration to alchemize inside me everything that is lower and limited. Minutes marked by a profound state of mental void and as I said earlier, by an overwhelming presence, almost like a physical hug, from the Archangel Zadakiel. I found out about this synchronicity filmed during the show at the Sala Palatului only at the end of the Week of Angels. A friend told me in just a few words, without giving me any detail, that something was seen in a recording by someone and was posted on the internet. What I can say is that in that moment I felt an extremely intense state, something very, very similar to the answer received by the lighting rod technique, very refined, but at the same time very intense, that went through my being from top to bottom, from the top of the head to the soles of the feet. Thereafter, whenever I was thinking of that moment, or when I saw and revised that sequence filmed, this “response” was coming back in a similar form. One aspect that I must admit amused me, is the fact that the person who posted this recording on the internet, had intended to denigrate this show, calling it “Yet another manifestation of MISA…” without knowing that in this way, he broadcast this apparition, showing in this way to all those who had the opportunity to watch the show” The gift of the Archangels” another spiritual and divinely integrated manifestation that many other actors and yogis from MISA Yoga School attended. As a Romanian word of wisdom says: “The sinner’s mouth says the truth.”. God has truly a macrocosmic sense of humor.” Indeed, it seems that those who posted that film on the Internet had the intention to denigrate the show in question and that, in their bizarre view, only by the fact that they associated it with MISA. Anima Mundi Association confirmed, moreover, that there are practitioners of MISA yoga courses among those who have taken part in the events organized by this association. But this does not explain at all why some people are so drastically against such refined artistic wonderful events that aim to make the mysterious and sublime world of the angelic entities accessible to the general public!!! The extraordinarily good part of this situation is the fact that the film was produced and posted by a “fighter” against MISA and this excludes any possible allegations of “fraud” which could questionen the authenticity of this miraculous phenomenon!

The posture of the turned Dragon

Amazing revelations and a joyful and exceptional spiritual gathering: The…