A few years ago I had the opportunity to meet Jetsunma Tenzin Palmo, one of the few Western yogis who lived the experience of a spiritual retreat in a Himalayan cave for 12 years. Back then I didn’t know much about her. She had been introduced to me during a lunch at a Buddhist center in Himachal Pradesh by another Australian Buddhist nun with whom I was traveling through India. I asked her what aspects of Tibetan Buddhism she found difficult to apply in her own spiritual practice. With typical English humor, the nun in her sixties explained to me that while she tries her best to help the so-called “third world countries,” Westerners need more compassion for themselves than they might think. For, compared to the Tibetans (who receive the necessary education and can deal face to face with the ego problem), the Westerner’s egos, although infatuated, get softened after the first hit… but they don’t die, because their personality is practically not developed, immature and doesn’t know how to deal with this confrontation. 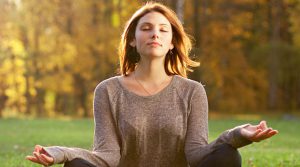 After the discussion with her, it was the first time in my life that I seriously and honestly asked myself how do I face the problem of self-compassion. And I understood that only when you come to accept yourself, when you “make peace” with your own being, when your inner turmoil has calmed down, you can start helping others. Only then you begin to understand that having and showing compassion for others means including yourself among them. That the first step in helping others is to help yourself first. That the great revolution of the world begins with one’s own inner revolution.

Since then it has been much easier for me to understand the development of the concept of BODHICITTA, so often found in MAHAYANA Buddhism: to find support in yourself, to become spiritually perfect, for thus you become able to give, full of compassion, a competent help to others.

As long as he is not spiritually perfect, man does not know in advance the effects of his actions and then what he considers to be help is not necessarily useful. And I even had a proof in India when some Westerners who came to study at a meditation center in Dharamsala were deeply impressed by the teacher’s explanations about the benefits of generosity. That is precisely why they decided to collect money to help beggars in the region. But the next day they found only one beggar and the people, full of magnanimity, decided to give him all the money collected. A few days later, the beggar was found in an alcoholic coma: he had bought alcohol with all the money he received, to celebrate the event!

Compassion is at the foundation of all religions and many authentic spiritual paths. It gives them life and enlivens them. It feeds them and orders them. For what else if not the profound feeling of compassion for the suffering or ignorance of others can determine you to dedicate your life to helping them overcome their own condition? What else except compassion makes the bodhisattvas give up the ultimate fusion with the Godly Reality in order to be able to remain in manifestation and thus be of use to people in need?

We find compassion embodied in our godly model Jesus Christ and expressed by Him in numerous parables or through the deeds of his life. The most famous is the parable of the Good Samaritan. In Christianity it is given immense value and that is why it is celebrated every year in the Orthodox calendar on the 25th Sunday after Pentecost. 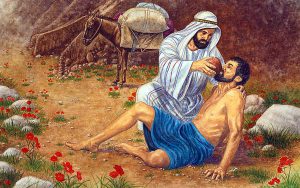 We also find compassion in Islam where each of the 114 verses of the Koran (with the exception of one) begins with the wording: “in the name of God, the Merciful and Compassionate”.

The Jains showered the feeling of compassion not only on all human beings but also on every living creature. Life is considered sacred in all its forms. That is why Jainism is the only religion that requires its devotees to be strictly vegetarian. No food is accepted if it has been obtained by force, mistreatment or killing.

Hindus believe that the Godly Mother takes the form of the Great Macrocosmic Power TARA to show her compassion to all beings, to guide them and offer them her unconditional protection when they are in distress. Moreover, each of the 10 Great Macrocosmic Powers in the MAHA VIDYA YOGA tradition presents their personal aspect of compassion and bestowal of godly liberating grace.

The Jewish tradition mentions in numerous biblical episodes the godly compassion towards human mistakes and suffering. King David often pleads for godly compassion in his wonderful Psalms. Rabbi Hillel remained famous for the way he succinctly answered a neophyte who asked him to reveal the essence of the Torah: “What you do not like, do not do to your neighbor. This is the entire Torah. The rest is just its explanation.”

Compassion is the core of MAHAYANA Buddhism. For compassion alone shown towards all suffering people is enough to make the major difference between the condition of arhat, towards which the aspirant of the HINAYANA path tends (and which involves efforts to reach his own spiritual perfection) and that of bodhisattva, towards which the practitioner of the MAHAYANA path aspires and which mainly involves generating and maintaining the intense desire to perfect oneself spiritually in order to be of real help to as many of our fellows as possible.

We are all brothers and sisters

Over time, compassion proved, in addition to the deepest feeling of humanizing beings, a genuine emotional and spiritual link between all living creatures. It shows us as clearly as possible that we are not alone. In all this web of existence we are always together, reflecting each other, enriching each other through our simple existence. The great yogi of India, Sri Aurobindo, also said that the real steps in personal spiritual evolution are made only when humanity itself takes those steps.

There is in the AVATAMSAKASUTRA – one of the most famous and influential texts of MAHAYANA Buddhism – a story that very convincingly illustrates the interdependence of all things and the way in which each of us, whether we know it or not, are closely connected to the existence of others. In the divine realm of the great god INDRA, SVARGA LOKA, a perfect artist made a magic fabric, a fabric that stretches unlimitedly in all directions. The artist satisfied the wishes of the gods and placed a precious stone in each braid of the warp. Because the fabric unfolds to infinity, the number of precious stones is infinite. In a miraculous way, each stone reflects all the other stones in the fabric, while it itself is reflected in a multitude of colors by all the other stones. Also, each reflection of the stones found in that stone contains the reflections of the other stones. And so on forever.

In our everyday life, it is the feeling of compassion that moves hardened hearts and brings a smile back to the face of the ones suffering. The feeling expresses the profound understanding of the pain of the one next to you and your sincere desire to help him. In the adventure of self-knowledge, compassion plays an essential role – it can remove the barriers erected by ignorance between us and others, between us and ourselves.

To emphasize the importance of compassion in everyone’s life Lama Zopa Rinpoche often used to say to his devotees:

“Compassion involves awakening in yourself the state of humanity that allows us to then feel, in a mysterious, empathetic way, what the other person is experiencing. The suffering that exists on this planet… there is no doubt that in order to get as much as possible to overcome it, the wise solution is to rise from ignorance. Because what always causes suffering is ignorance. In this way, a state of godly mercy can be awakened in us and thus, inspired by God, this state of overwhelming love will spring from us that will help others and at the same time will transform us profoundly. The state of compassion never remains without an echo deep in our being.” Yoga Teacher Emeritus Gregorian Bivolaru