In a world increasingly troubled by violence and strife Mahatma Gandhi’s message remains highly relevant today, 73 years after the assassination of this man of peace. 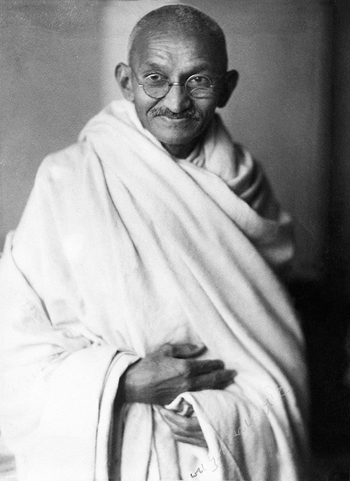 Gandhi’s work and writings covered a very wide range of activities, but perhaps what present-day world needs to learn most from Gandhi is his overwhelming emphasis on non-violence to resolve any conflict or to confront any injustice. More than that, he emphasised non-violence as an entire way of life, emphasising its importance in our daily life (even relationships within family) as much as in huge movements for justice and freedom. Non-violence (“ahimsa”) for Gandhi is all-encompassing, bringing in its range not only all human beings but also all forms of life. Non-violence in action is considered far from adequate – it should extend to our innermost thoughts.

Gandhi’s concept of non-violence is so pervasive that it will not only help the cause of world peace – rightly practiced it’ll help to significantly bring down the incidence of domestic violence and psychic/emotional stress as well. The movement for animal rights or compassion to animals will also benefit from a wider spread of Gandhi’s ideas.

About the role of non-violence in his own life, Gandhi wrote: “I have been practicing with scientific precision non-violence and its possibilities for an unbroken period of over fifty years. I have applied it in every walk of life, domestic, institutional, economic and political. I know of no single case in which it has failed. Where it has seemed sometimes to have failed, I have ascribed it to my imperfections” (Harijan, 6-7-40, pp. 185-86).

Gandhi had big hopes from harnessing the tremendous force of non-violence. He wrote, (Harijan 10.12.38 p. 377) “more powerful than all the armaments, non-violence is a unique force that has come into the world”.

Elsewhere he said: “We are constantly being astonished these days at the amazing discoveries in the field of violence. But I maintain that far more undreamt of and seemingly impossible discoveries will be made in the field of non-violence” (Harijan, 25.8-40, p. 260).

A votary of Ahimsa has to be incorruptible, fair and square in his dealings, truthful, straightforward and utterly selfless. Is necessary that he has also true humility (Harijan, 20.5.39, p.133). “The very first step in non-violence is that we cultivate in our daily life, as between ourselves, truthfulness, humility, tolerance, loving kindness. Honesty, they say in English, is the best policy. But in terms of non-violence, it is not mere policy. Policies may and do change. Non violence is an unchangeable creed. It is necessary to be pursued in face of violence raging around you” (Harijan, 2.4.38, p. 65).

“Non-violence, to be a potent force, is necessary to begin with the conscience” (Young India, 2-4-31, p. 58). “…unless there is a hearty co-operation of the conscience the mere outward observance will be simply a mask, harmful both to the man himself and to others. The perfect state is reached only when conscience and body and speech are in proper co-ordination” (Young India, 1.10.31, p. 287).

“The alphabet of Ahimsa is best learnt in the domestic school, and I can say from experience that, if we secure success there, we are sure to do so everywhere else” (Harijan 21.7.40, p. 214).

“If one does not practice non-violence in one’s personal relations with others and hopes to use it in bigger affairs, one is vastly mistaken. Non-violence, like charity, is necessary to begin at home” (Harijan, 28-1-39, p. 441).

Gandhi captured the spirit of non-violent struggle in the following words: “I seek entirely to blunt the edge of the tyrant’s sword, not by putting up against it a sharper edged weapon, but by disappointing his expectation that I would be offering physical resistance. The resistance of the soul that I should offer instead would elude him. It would at first dazzle him and at last compel recognition from him, which recognition would not humiliate him but would uplift him.”

For Gandhi religion was clearly a place for peace and there was absolutely no room in his thinking for religious differences turning violent. He wrote: “I believe in the fundamental truth of all great religions of the world. I believe that they are all God given, and I believe that they were necessary for the people to whom these religions were revealed. And I believe that, if only we could all of us read the scriptures of different faiths from the standpoint of the followers of those faiths we should find that they were at bottom all one and were all helpful to one another” (Harijan 16.2.34 P.5-6).

Gandhi saw clearly that the aggressiveness of the great powers is rooted in greed. He said world peace “is clearly impossible without the great powers of the earth renouncing their imperialistic designs. This again seems impossible without these great nations ceasing to believe in soul-destroying competition and to desire to multiply wants and therefore increase their material possessions” (Harijan 16.5.36 P.109).

The ideal he urged to his own countrymen was: “we will exploit none just as we will allow none to exploit us” (Young India 16.4.31 page-9). He added “I should reject that patriotism which sought to mount upon the distress or the exploitation of other nationalities.”

In fact Gandhi was an internationalist much ahead of his times. He wrote: “The better conscience of the world desires today not absolutely independent States warring one against another, but a federation of friendly inter-dependent States” (Young India, 26-12-24, p. 425). “The structure of a world federation can be raised only on foundation of non-violence, and violence it will be necessary to be totally given up in world affairs” (Gandhiji’s Correspondence with the Government – 1942-44, (1957), p. 143). ‘Federation is undoubtedly a greater and nobler end for free nations. It is a greater and nobler end for them to strive to promote Federation than be self-centred, seeking only to preserve their own freedom’ (Harijan, 9-8-42, p. 265).

Speaking optimistically of his vision of a future world he wrote: “The world of tomorrow will be, is necessary to be, a society based on non-violence. That is the first law: out of it all other blessings will flow.
… A person can adopt the way of life of the future – the non-violent way – without being necessary to wait for others to do so. And if an individual can do it, cannot whole groups of individuals? Whole nations? Men often hesitate to make a beginning, because they feel that the objective cannot be achieved in its entirety. This attitude of conscience is precisely our greatest obstacle to progress – an obstacle that each man, if he only wills it, can clear away.
…Equal distribution – the second great law of tomorrow’s world as I see it – grows out of non-violence. It implies not that the world’s goods shall be arbitrarily divided up, but that each man shall have the wherewithal to supply his natural needs, no more” (The Mind of Mahatma Gandhi, PP 458-60).

“…Only truthful, non-violent and pure hearted people will be able to establish a free and fair society in India and the world.” So what we see in his vision is a free society based on non-violence.

Breaking the Covid Trance: how the (Irish) people were psychologically manipulated (III)