Stevia, a plant once banned and confiscated in the U.S. during the ’80s and ’90s because it had non-toxic and sweet-tasting leaves, has a story all its own. Even Stevia’s own printed story was at one time seized by the FDA in Dallas with the intent to burn the publications. 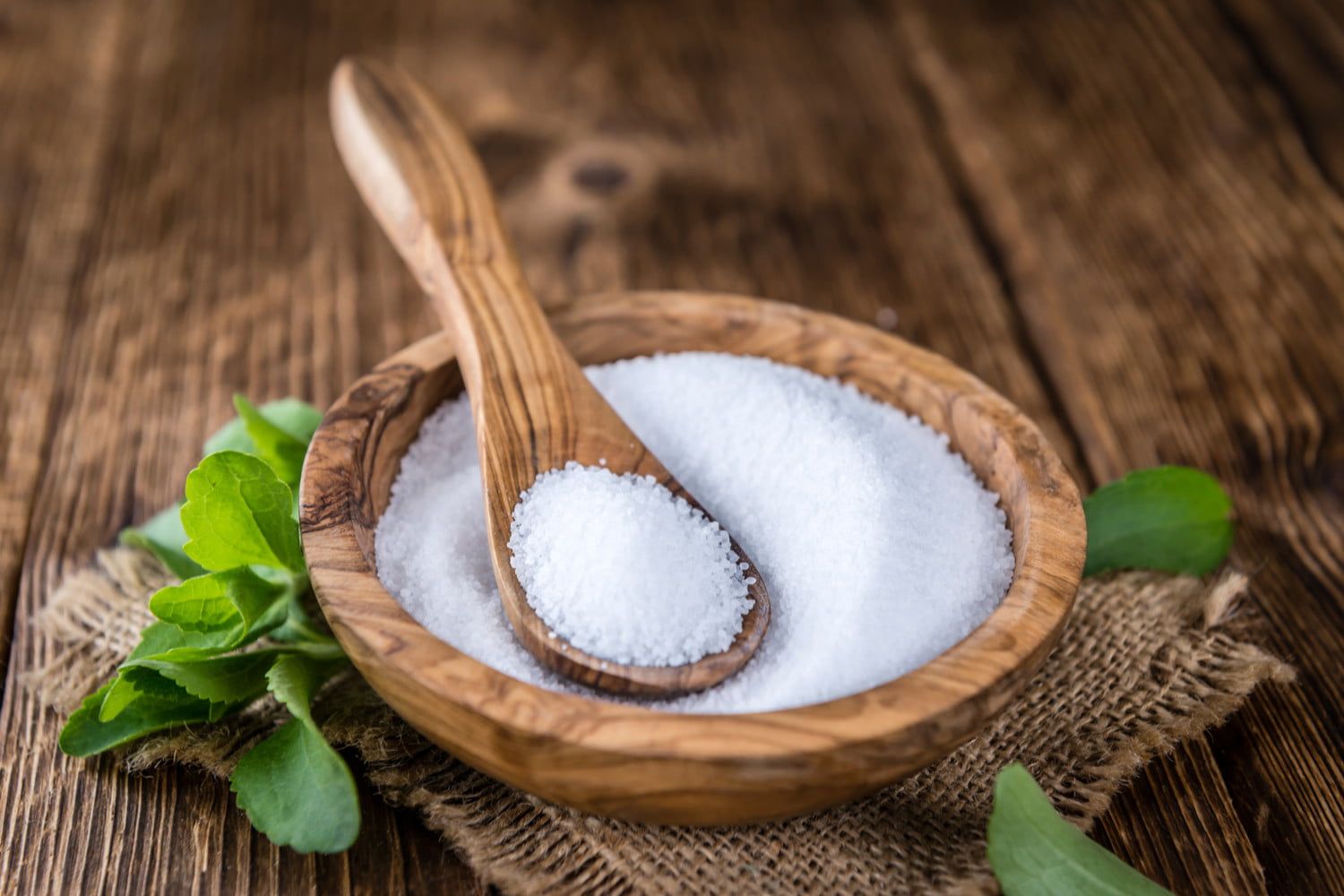 The story of Stevia begins at the time of the Ford Administration during the early ’70s, shortly after Ford pardoned Nixon for his crimes. Donald Rumsfeld is the Secretary of Defense, while Dick Cheney serves as Chief of Staff under President Ford. Then President Carter takes office in 1977. So, where do fellows like Rumsfeld and Cheney go when they are not a part of their party’s political arena and need jobs? Cheney eventually becomes CEO of Halliburton (a billion dollar defense contracting firm). For the first time in 20 years Donald Rumsfeld moves into the private sector. He takes the CEO position of G.D. Searle in 1977.

G. D. Searle was millions of dollars in debt. It had been working on an artificial sweetener, aspartame (NutraSweet). However, the scientific research being conducted by the FDA, Searle labs, and independent researchers was showing definite signs of toxicity. Six of seven monkeys had seizures, with one dying in Searle’s own study. Rats developed brain tumors. A variety of neurological problems kept cropping up in test animals. This neurological aspect now is suspected with often causing Multiple Sclerosis. Also, research was demonstrating how aspartame was actually “eating holes in the brain”, much like MSG (which had been voluntarily pulled from baby food in the early seventies because it was causing mental retardation). The current list of aspartame links to human ailments is too numerable to mention. Aspartame can even serve as an effective Fire Ant poison.

In the late ’70s, G. D. Searle was in the midst of criminal indictments because of its covertly masked false reports on aspartame. However, the chief Federal prosecutor on the case, Samuel Skinner, and later his assistant attorney, were hired by Searle’s own law firm. Thus, the case was dropped. Years later, Skinner becomes the Secretary of Transportation followed by becoming Chief of Staff under H. W. Bush.

By 1980, research definitely demonstrated aspartame as unsafe for broad public consumption. The marketing of aspartame/NutraSweet seemed impossible. Again, remember that Donald Rumsfeld was serving as CEO of G. D. Searle. Also, Ronald Reagan was running for President around this time. Donald Rumsfeld had been tentatively slated to be Reagan’s Vice President. However, at the very last moment a turn of events put H. W. Bush as Reagan’s Vice Presidential candidate instead of Rumsfeld.

Rumsfeld was owed a Reagan favor. The day after taking office in 1981, President Reagan issued an unprecedented executive order suspending the authority of the current FDA commissioner to take actions. Reagan’s newly appointed FDA commissioner, Arthur Hayes, manipulated the system and approved the marketing of aspartame despite the FDA’s own scientific evidence demonstrating it as unsafe.

In 1983, Hayes leaves the FDA to work as a thousand dollar per day consultant for Searle’s public relations firm. In fact, no less than seven “fast track” approving, FDA officials later leave to work in high-paying aspartame related industries.

During 1983 while still CEO of Searle, Rumsfeld travels to Iraq visiting with Saddam Hussein in order to pave the way for later U. S. weapons sales to Iraq, (4 billion dollars in chemical and biological weapons).

Financial muscle is beyond the imagination considering the fact that Pharmacia Upjohn owns Monsanto. Also, Monsanto often coordinates business activities with other behemoths like Eli Lilly. Monsanto has a huge reputation for being a “revolving door” between corporate executive positions and influential government jobs/White House appointments. These trade-off, corporate-positions in exchange for government-agency favoritism number in the dozens; and they can be a “Who’s Who” of White House cabinet members. Not only are there many types of other covert and corrupt governmental influences from Monsanto, but there is also the manipulated media and publishing censorships which have undeniably suppressed the documented health hazards of Monsanto’s products. (e.g. Fox News Reporters prohibited from revealing Monsanto’s own documents of cancer-causing products in milk. Also rejection of manuscripts in the book publishing industry because Monsanto’s name is mentioned.) The broad, general public commonly underestimates just how insanely rampant and prolific this insidious government/corporate/media corruption is. There are phenomenal conflicts of public interest which are not well-revealed.

The artificial sweetener industry is an international, multi-billion dollar business with a very, very high profit margin. In 1985, sales of aspartame in the United States were about three quarters of a billion dollars. In order to fully understand the story of Stevia and what starts to transpire in 1985, it is important to view the previous mitigating circumstances. 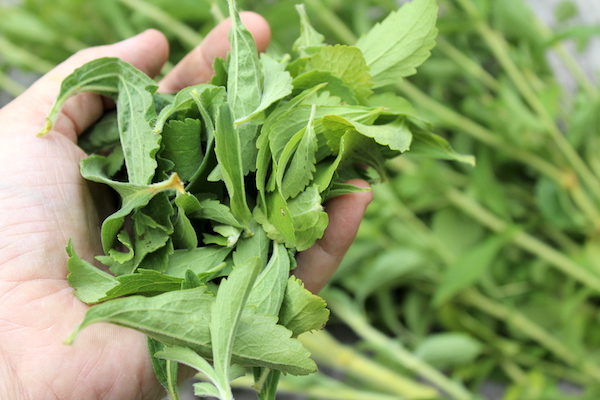 Stevia is a shrub native to the northern parts of South America, where it is a perennial. It is well-known for its sweet tasting leaves which have been estimated to be from 15 to more than 200 times sweeter than sugar, varying in its sweetness depending upon the plant, harvest time, conditions, extracts, and the “estimator”. Stevia has probably more than 150 species. However, the species rebaudiana is known for the sweeter leaves. It is grown commercially in South and Central America and also in the Far East.

For hundreds of years the indigenous peoples of the regions around northern Brazil utilized Stevia. Not only did it make for an excellent sweetener, but it also had medicinal qualities which are still employed today by the traditional medical practices of Brazil and Paraguay. The sweetener can boast “no calories, no carbohydrates”, along with balancing blood sugar levels. In fact, some of its nutrients, (such as Niacin, chromium, zinc, magnesium, manganese, potassium, selenium), help to regulate metabolism. Stevia tends to lower blood sugar, increase urination, and dilate blood vessels while lowering blood pressure. It can be used to reduce inflammations and to help heal wounds. Stevia also can help to kill bacteria, viruses, and fungi. As a medicinal plant remedy, it has been used to treat obesity, sweet cravings, depression, hypertension, fatigue, diabetes, high acid urine levels, heartburn, heart difficulties, and many other ailments.

There have been numerous studies on this plant and its constituents. Over one hundred chemicals have been identified. A variety of unique chemicals have been isolated which have a glucose or sugary sweetness. “Stevioside” has been called the sweetest of these chemical compounds and is said to be 300 times sweeter than table sugar. Typically it will make up from 6-18% of the leaf. Studies have also been conducted using some of these chemical extracts, and they have shown some promising results in assisting with different ailments. There are more than 200 published scientific studies which affirm the safety of Stevia.

Japan stands out as the epitome of safety in the public consumption of Stevia. The plant and its extracts have been used as a sweetener for foods and beverages since the 1970s after many initial safety studies were conducted. By the late 1980s, Stevia was outselling other artificial sweeteners (such as Aspartame/NutraSweet) in Japan. This fact is significant to note. The plant was now leading in the market share of the sweetener industry. An unpatentable plant was beating out a patented product. If this market force was occurring in Japan, it certainly could occur in the United States.

In 1984, just prior to Monsanto’s buyout of aspartame in 1985, Jim May had an herbal company in Arizona. He took samples of a product containing the Stevia leaf and its concentrate to the local FDA office to see if the plant leaves and concentrate were okay to import. The local FDA was very friendly and said that there was absolutely no problem on importing the leaves and product. However, the local FDA office later received a Washington mandate to halt the import of Stevia as a natural sweetener. Jim was told by the friendly local office: “…none of us here wants to do it. But the Washington office has demanded that we stop you from importing your stevia concentrate.... We’re not telling you there’s anything wrong with it [or] that anybody has had a problem. There’s no complaint other than the NutraSweet Company; they are the ones who complained that you are selling a natural sweetener that hadn’t had to go through all the testing and so forth.”

In the late ’80s, a whole host of companies in the United States started having surprising, unexpected difficulties from the FDA. Hundreds of tons of Stevia were being imported at this time. Tea companies such as Lipton, Celestial Seasonings, and Traditional Medicinals had significant inventories of tea sweetened with Stevia. Warehouse raids occurred and inventory was seized and destroyed. Throughout the country, consumable products containing Stevia were aggressively searched for. Once discovered, all products were seized. The injustices and weird scenarios could fill a book. Finally, an official ban on the import of Stevia was implemented in 1991.

Between 1991 and 1994, one possibly could purchase Stevia in a package which labeled it as a “cosmetic”. In 1994, the legal status of Stevia modified quite by accident. Congress had passed legislation regarding dietary supplements. Stevia could now legally be sold in the United States for consumption if it was labeled “dietary supplement”. However, any reference to it being used as a natural sweetener could bring about legal confiscation.

Ed Johnson, prior U.S. Assistant Attorney for the Western District of Texas, is a victim of aspartame poisoning. He states that the FDA does “not allow Stevia to be labeled, advertised, or promoted as a sweetener.” Some products currently “cross the line” into gray areas with reference to Stevia’s sweetness. This message of “sweet” in the marketplace is sometimes allowed due to a lack of enforcement. The advent of internet sales also has a bearing upon this enforcement factor.

The Dallas FDA office raided Stevita Company in Arlington, Texas during the summer of 1998. The company was ordered to destroy its books concerning Stevia. One was a cookbook. Another book told the story of Stevia, much like this article. Oscar Rodes, president of Stevita Company, previously had been a victim of an FDA raid in 1991. They had seized a sizable amount of inventory in that surprise raid. He points out how there had been neither forewarning nor indication whatsoever at that time of any type of product violation.

The 1994 classification as a “dietary supplement” puts Stevia close to a similar ranking as vitamins. This is an ambiguous legal dilemma for FDA policy. Countless dollars in legal fees have been spent on this issue of Stevia. Petitions and volumes of documents have been presented to the FDA, but to no avail.

This is the story of Stevia, a plant so sweet that it brought out all the bitter corruption and deceit within American government and corporate America. We can not rely upon the conventional mainstream media to tell this story.

Simple strategies that will improve your immunity (II)