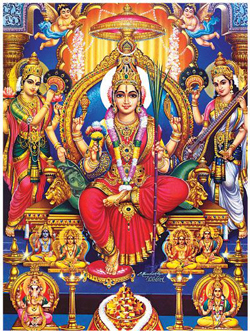 The Great Cosmic Power Tripura Sundari can be visualized during a meditation as a deity whose form is “brighter than a million suns”, and on top of her head she wears a crescent moon (which sometimes is shown as being formed right out of the goddess’s hair). Tripura Sundari is depicted with four arms, two of them having a bowl of sugar candy and five arrows braided of flowers, and the other two hands hold a noose and a hook. She is the represented naked or wearing a fine red veil and adorned with various beautiful ornaments (bracelets around her ankles and hands, earrings, rings, necklaces and so on). Her beauty is dazzling, and her face and body are very young. The Goddess is often represented as sitting on a bed that signifies the great god Sadashiva who bends over the four forms of Brahma, Vishnu, Rudra and Maheshvara (substituting the four legs of the bed).

The bright red color in which the Great Cosmic Power Tripura Sundari is represented, signifies her state of ecstatic happiness, her illuminating and complete knowledge, as well as her boundless compassion for all the beings of  the Creation. The symbolic significance attributed to the objects which she keeps in her hands is: the bowl for the candy sugar represents the mind and the arrows braided from flowers symbolize the four senses, which by the grace of the goddess become as many “gates” for the manifestation of an overwhelming happiness.

Metaphorically, Tripura Sundari “hunts” us with the arrows of delight and happiness, revealing to us all the forms of Creation as aspects of our divine inner nature, which is full of endless bliss of the supreme ecstasy. The chain she wears in her third hand signifies the ability to attract the sincere and devout worshipers through her dazzling beauty. The hook in her last hand is the means by which it severs any attachment to illusory appearance of the surrounding world.

The five forms of Shiva that Sundari sits on are actually called “the five corpses” because they are absolutely inert without the energy that she infuses. In terms of subtle, these five shapes symbolize the five elements (mahabhuta) of the Manifestation and the five kinds of main activities of Shiva (creation, maintenance, destruction, concealment and grace). Thus, Brahma signifies the earth element (prithivi mahabhuta) and the activity of creation. Vishnu is the water element (apas mahabhuta) and the activity of maintaining and support of what has already been created. Rudra means the fire element (agni mahabhuta) and the activity of destruction and transformation. Maheshvara symbolizes the air element (vayu mahabhuta) and ignorance of the origins or, in other words, Shiva’s activity of occultation or concealment of his essential nature, thus enabling the Macrocosm or Creation to manifest in His infinite consciousness. Sadashiva is the fifth and most subtle of elements, which is the ether (akasha mahabhuta); it also symbolizes the grace of Shiva, which frees us from the heavy chains of illusion of the Manifestation and gives us the ability to transcend it altogether.