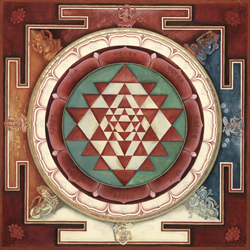 What is a yantra?
The world is often seen as a complex system by the tantric tradition and therefore requires a simplification, a reduction to essence up to the smallest details. Thus, a yantra is a linear or geometric, two-dimensional or three-dimensional drawing through which we accede to the essential source of the manifestation of any aspect in this creation. The ruling or protective deity of the yantra always occupies the central place (when the yantra is flat) or the top of the yantra (when it is a three-dimensional representation). A yantra can be placed horizontally, bhuprastara – in two dimensions, facing east or north, or meruprastara – in three dimensions, where the yantra has a pyramidal shape. A yantra can be loaded with a mantra or a Bija mantra of that precise representation, to become effective.

Bindu or the central point of Sri Yantra is the “focus of power” in which the entire universe is designed in a condensed form, through which is realized the ineffable resonance between the microcosm of the worshiper with specific aspects and energies of Tripura Sundari. She dwells as a gigantic universal spirit in bindu, in the center of Sri Yantra, but because it is occulted, it is not represented. From this point all the threads of the force of creation start.

Sri Yantra has a core group of nine triangles, which is the projection of the level of the earth of the full cycle of the divine forces. The diagram expresses the triad of the divine forces of the universal Emanation, the supporting Equilibrium and the cosmic Resorption. Thus, the image of the divine Trinitarian reflects in creation according to the analogy principle, the Waters from above (the Heaven) are mirrored in the Waters from Below (the Earth). Thus we have four pairs of complementary triangles, out of which the ones pointing down represent the descending, “feminine”, Yin energies of the manifestation, and triangles pointing up correspond to the rising, “male”, Yang energies of Resorption, while in the center of the diagram there is a unique triangle of the supreme divine energies. Unseen, the decade governs everything through the focus point of the triangle in the center, the true resort of transcendence.

The other parts that comprise the yantra – petals, yantra lines – are normally arranged in concentric circles (mandalas) and each one symbolizes an attribute of the goddess. In Sri Yantra there are 111 aspects present. It can be associated with the symbolism of the human body where there are also very accurate reports between different parts of the body, with each other. Thus, we can see Tripura Sundari as a goddess who identifies perfectly to the last detail with the human being, regarded as a Microcosm.
The square or bhupura represent the earth energy. It is represented as a surface that surrounds in a wall like manner all parts of the yantra. The three lines of bhupura of Sri Yantra represent each one aspect of Tripura Sundari. In the outer line there are represented eight protective worlds (lokapalas), the guardian spirits of the main directions and of the intermediate directions. In the middle line there are eight Siddhi Shaktis representing the world of the senses. Within the inner line there are eight shaktis representing the control over the lower tendencies.

Sri Yantra represents analogically a whole universe in expansion or resorption. It has to be actively contemplated, perceiving the subtle analog sense, that is either representing the cosmic movement of Tripura Sundari which, from its center extends around creating the universe, or we worship Her starting from the exterior to finally get to its center where the ultimate spiritual essence of Tripura Sundari lies. The aspirant who adores Tripura Sundari will soon understand all this subtle cosmic process.

“The one highly awakened spiritually has to meditate continually on the supreme almighty splendor which is the will of God.” (Sutra 72 of Yoginihridaya)