The unexpected occurrence of a UFO above the Bremen airport 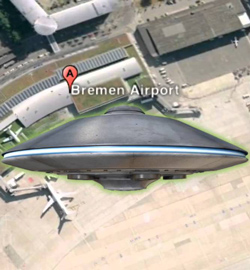 In early January of the year 2014, Bremen airport was the scene of a mysterious and surprising appearance of a UFO that stopped the air traffic for two hours. Bremen, an important industrial city in Germany, is known as a significant location in terms of aero-space technology development, both military and civilian.

On a Monday evening, January 6th 2014, radar operators of Bremen airport reported three distinct apparitions of an unidentified flying object (UFO) for three hours, between 18:30 – 21:30, local time. Bremen police was called from the beginning but attempts to intercept the UFO were unsuccessful, being concluded around 20:45.

The unexpected apparition of the UFO seriously affected air traffic. A flight for Frankfurt was canceled, another one coming from Munich was redirected to Hanover, and a plane coming from Paris was forced to stay in the air for a long period of time before receiving permission to land. 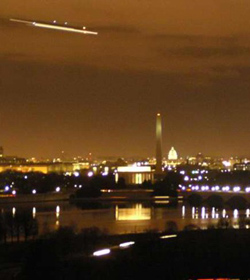 In recent years, many such UFO apparitions were reported over various airports all around the world, interrupting air traffic for considerable time. One such incident occurred in China in 2011 when a UFO flew over Hangzhou international airport, causing the cancellation or delay of flights for more than 2000 passengers. On that occasion, authorities were forced to recognize the obvious truth of the extraterrestrial origin of the UFO. Many specialists in the field believe that the incident in Bremen falls into the same pattern as other UFO sightings around the world.

The spokesman for the company responsible for German air traffic control (DFS – Deutsche Flugsicherung) stated that the unidentified object that flew over the Bremen airport “had normal red and green lights with approach signals on both sides”.

A witness to the event, Dominique Höber, reported that the “the object flew at a height between 100 and 200 meters and passed over the house four times”.
Authorities informed that an investigation into the incident is ongoing for “intrusion into controlled air space”.

Authorities are not willing to admit it was a UFO, however, they cannot say clearly what it was 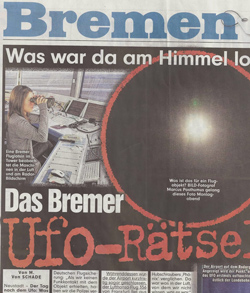 The Bremen police spokesman said that “we do not know yet what the unidentified object was, but it certainly was there.”

The UFO “played” with the police so although it could be seen with binoculars from the air traffic control tower (according to the Weser Kurier newspaper), however the police helicopter that was sent to survey the area and spot it amazingly could not find it!

Another less known and at the same time mysterious aspect is the fact that although the UFO appeared on the airport radar, German Air Safety and the Air Force could not identify the flying object on their radars.
The German press published numerous assumptions about the possibility that the unidentified flying object was a drone or even a military aircraft prototype.

The hypothesis that the UFO was actually a drone seems most plausible to those who refuse to accept the probability of an “alien visit”.

Modern drones can move across the sky in all directions without making too much noise. With a few LEDs, they may appear quite impressive and large in the dark. Toy drones can also be bought for fairly low prices. However, in this case, there is no question about it. According to the German Air Safety Data, the wind was quite strong that evening and commercial drones become difficult to control even when the wind is weak. If that UFO had been a drone “wandering” across the rooftops of Bremen, it must have been a technical or a military one. However, in order for such a drone to be used near an airport, flight approvals are mandatory.
It is therefore impossible to have been a drone, considering that the police, German Air Safety and Air Force would have discovered the truth soon enough and no cancellation of flights would have been needed or countless assumptions and vague statements from the authorities. 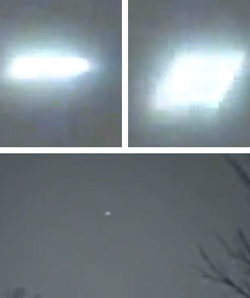 Radio Bremen received a tip about the possibility for the UFO to have been a military test flight. However, this can be very difficult to verify because most military projects are top secret. The fact is that Bremen is an important objective for the German Arms Industry and the company Rheinmetall Defence produces drones for military purposes here. However, it is very unlikely for this company to conduct military air tests of new products over the city and even less over the airport, thereby impairing its regular functioning.

German police believes that it was a helicopter with a probability of 90%. However, helicopters make a noise which is easy to recognize and eye-witnesses reported that the UFO was rather quiet as compared to a helicopter, rather resembling a jet aircraft.

Another hypothesis, quite bewildering, is that the whole incident was invented by the media. This hypothesis, in the opinion of those who propagated it is supported by the fact that the authorities have not provided yet any audio or video recording of this apparition. The idea that the media invented this news to increase its ratings is absurd. What about the hundreds of passengers who were forced to delay their travel plans? If it was just a false alarm, the police should have disclosed this farce from the very beginning and not fly over the airport for two hours.

The video uploaded on the internet as coming from an eye-witness proved to be fake. The man who presented the so-called evidence actually made a re-post of a 2012 video from a man in Venezuela.

Despite the misinformation done by the authorities, the truth regarding the “alien visits” on Earth remains the same

Beyond UFO cover-up attempts by the authorities, the existence of aliens is increasingly visible. Many testimonies from eye-witnesses and visual proof on the internet are relevant in terms of the increasingly frequent UFO apparitions near various towns.

Recently, politicians such as Dimitri Medvedev, prime-minister of Russia or Paul Hallyer, former minister of defense of Canada have warned us that humans are not the only beings in the universe, and some extraterrestrial races have long been in contact with the great world powers.