The claim by Ukraine’s foreign minister at the NATO meeting in Brussels that “Weapons, weapons and weapons” are the only items on his agenda, reflects the growing clamour from its government, from the western media and many politicians to pour even more military hardware into the country. 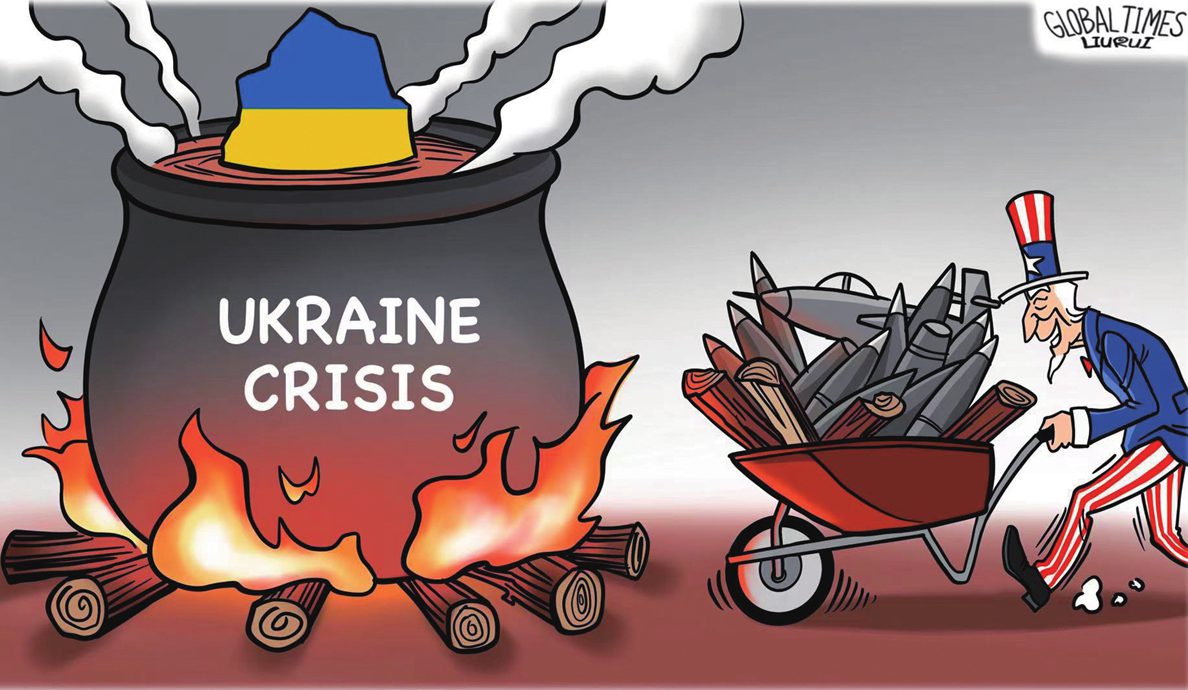 The minister, Dmytro Kuleba, claimed that this will save lives and bring the war to a quicker end: “The more weapons we get, and the sooner they arrive in Ukraine, the more human lives will be saved.”

In fact, the opposite is true. The more weapons sent to Ukraine, the more likely this war will spill over into an open conflict between NATO and Russia in which the major losers will be the people of Ukraine.

Yet these weapons are being provided on a large scale. The Czech Republic has been sending tanks to Ukraine. Britain has hosted Ukrainian generals on the army training ground at Salisbury Plain where they have been shown different weapons in action and have supposedly been promised air defence systems and armoured personnel carriers.

NATO maintains the fiction that it is not involved in this war by claiming that it is supplying nothing – this is being done by sovereign states who just occur to be part of the military alliance. Yet this whole process is facilitated by NATO – and the meeting in Brussels was an opportunity to discuss which of the sovereign states to be the latest to line up with more weaponry.

None of this is new. “Over the last seven years, the UK has trained more than 22,000 Ukrainian military personnel as part of Operation Orbital and the UK-led Maritime Training Initiative, including in, dealing with improvised explosive devices, infantry tactics, medical skills, logistics, leadership and planning,” according to one account.

A report on NATO surveillance on Ukraine’s and Russian border from a German air base claimed that it did not share any intelligence gathered in this way with Ukraine: “The alliance itself stresses that it is not involved with the co-ordination or dissemination of any intelligence-sharing with Kyiv, but that member states could be taking unilateral decisions to pass on any information that could help Ukraine’s armed forces with their defence.”

Given that around 100 NATO planes a day have been involved in this surveillance since the war began this claim has to be met with a large degree of skepticism.

The trigger for these further demands for weapons to Ukraine has been the evidence of terrible war crimes by Russia in several towns now evacuated by their troops. These reports of rape, torture and killing are numerous and need to be investigated, and those responsible held to account.

They demonstrate the extent to which civilians are likely to be disproportionately the victims of war and are unfortunately the common experience of war, where invading armies behave in this way. There can only ever be condemnation for such crimes, wherever they occur and whoever has committed them – and there has also been evidence of them on the Ukrainian side. They should not, however, be the justification for what is occurring, which is calls on all sides to escalate the war.

We can rightly completely oppose the Russian invasion and the continued prosecution of the war. But the situation in Ukraine calls out for a peace settlement, not further war. Casualties on both sides have clearly been very high. The number of refugees who have left the country runs into several million, while towns and cities are devastated by bombardment and fighting.

Yet peace is precisely what is not on the agenda from NATO or the British and US governments. You would be hard pushed to find reports or discussion in Britain about peace talks going on between Russia and Ukraine recently in Istanbul and Belarus. Calls for more weapons are music to Boris Johnson’s ears. He does not want a peace settlement and has been putting pressure on the US to oppose any compromise by Ukraine with Russia, despite such a compromise being the only way to settle this war. 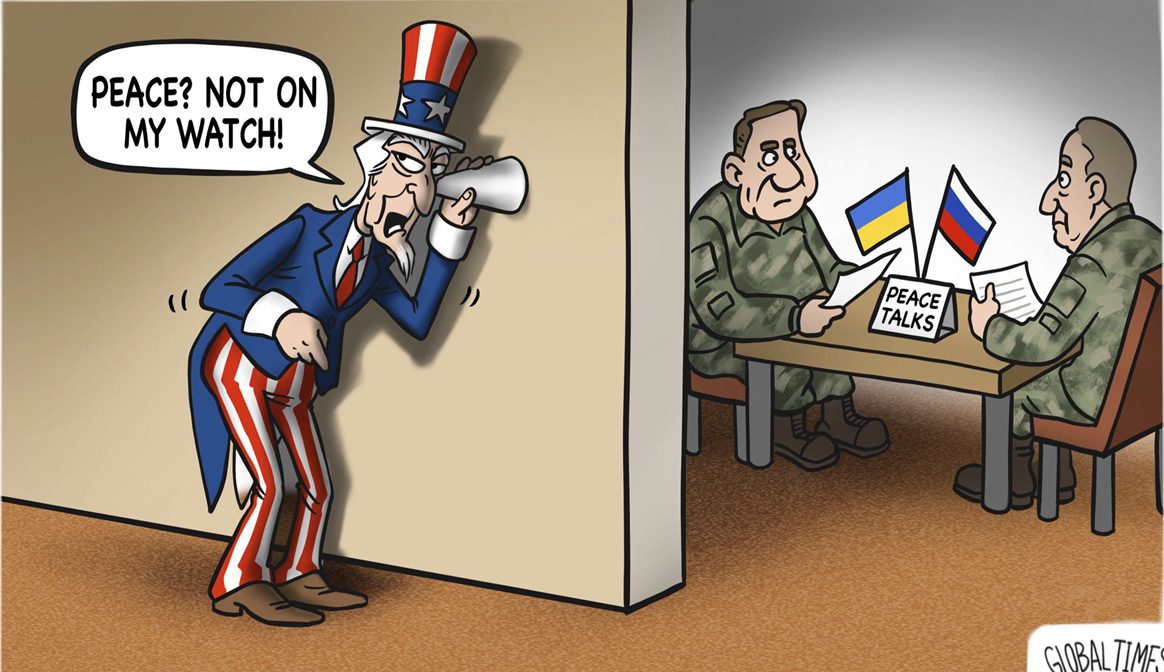 At the same time, Joe Biden has raised the stakes by calling Putin a war criminal and demanding that he is removed. Regime change has been a total failure where the US has attempted it in recent decades and has only led to further war and instability – witness Afghanistan, Iraq and Libya.

The US and Britain believe that prolonging the war will further weaken Russia. It will also help strengthen NATO and its military agenda. That is why they (and the largely uncritical media) keep urging more arms and more sanctions, which are a form of economic warfare. These considerations are not in the interests of the people suffering in Ukraine or indeed in Russia.

So, the week in which we see evidence of the devastation caused by the Russian invasion is also the week where we are seeing a major escalation by the US, UK, EU and NATO. Further sanctions are being imposed on Russia which will have consequences for the Russian people and for the wider world economy. The weapons being supplied are leading towards a more dangerous war in which the involvement of NATO member states is more obvious and more potentially lethal. We should remind ourselves that this is a conflict between a nuclear armed state which is turning into more open conflict with nuclear armed states in NATO.

Whatever the outcome of the next few weeks and months in Ukraine, and we need to do everything to end the war as soon as possible, it will have a permanent impact on global politics and economics. The world order is being remade round Ukraine.

We are already down a path of greater militarisation and the strengthening of NATO, with pressure on Europe’s major power, Germany, to stop its energy supplies from Russia and to dramatically increase its military spending – a long-term demand of the US and NATO. This will have long term consequences for the arms race internationally and the military role of Europe.

There are also attempts to change the structures of the United Nations, for example to enable majority voting on the UN Security Council. Russia’s removal from the UNHRC is evidence of this – but was clearly opposed by many countries especially in the global south, who either voted against it or abstained. The UN was part of the post-war settlement in 1945 and contains five permanent members on its security council – the US, UK, China, Russia and France. They represent the major powers and can veto the council’s decisions. The UN tended to reflect this great power politics and its Cold War iterations. There are many criticisms that one could make of it but blaming its inadequacies all on Putin’s Russia simply ignores the way in which the biggest power, the US, has always circumvented UN decisions and wishes when it wanted to take another course of action.

Since the end of the Cold War, the UN has become much more marginal particularly as NATO has taken on a more expansionist and aggressive role. So, the UN was side-lined by NATO in Yugoslavia, Afghanistan and Iraq. The bombing of Libya in 2011 was a UN backed operation, but its morphing into regime change caused disquiet especially from Russia and China.

The Guardian’s Simon Tisdall says: “The UN desperately needs a fresh start. And so, too, does the disintegrating international order. If the UN fails over Putin and Ukraine as the League of Nations did over Mussolini and Ethiopia, then the global consequences, as in the 1930s, may be catastrophic for all.”

This is a ridiculous rewriting of history which – like so much coverage of the Ukraine – conveniently starts with Russian aggression rather than with the accumulation of arms spending, sanctions and conflict which has marked recent decades or the role of the richest countries in launching wars. 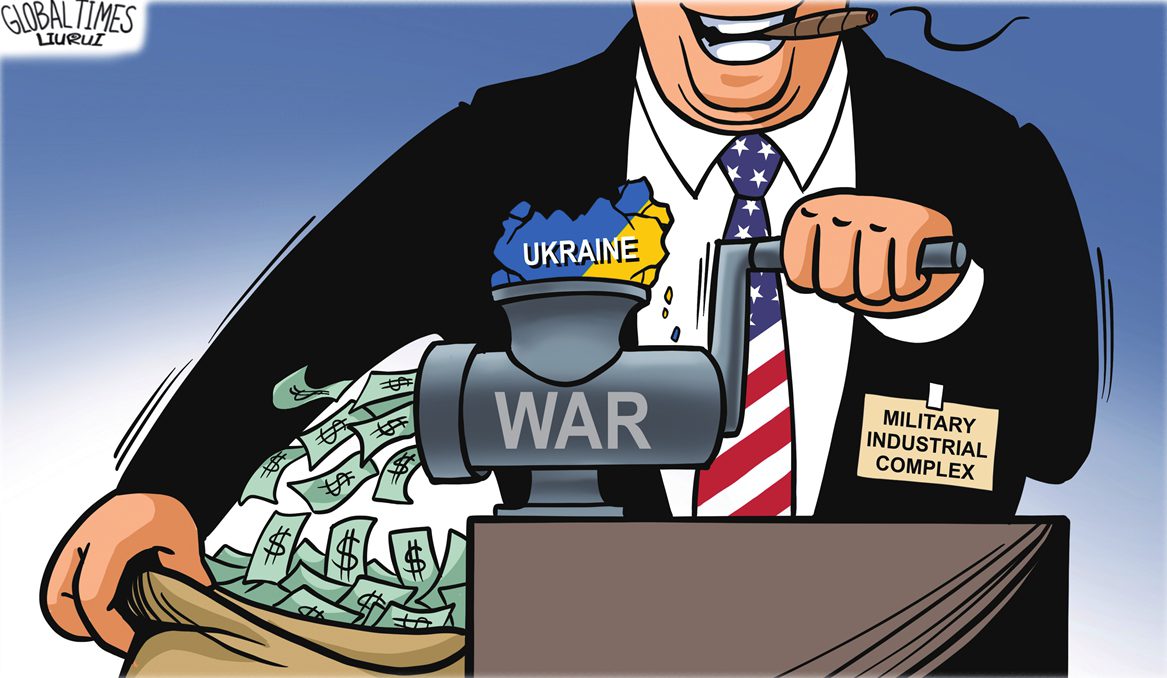 These developments have marked a stage of imperialism and inter imperialist conflict which has been marked by a declining superpower in the form of the US which still retains overwhelming military might and the rise of China both economically and militarily and growing competition between the two.

This division has implications for the other powers who are increasingly defined by their alliances. This is true militarily, economically and politically. We have seen this in the development of the AUKUS pact between the UK, US and Australia, set up as part of the growing cold war with China, which this week announced it would develop ‘next generation’ hyper-sonic weapons in response to Russia using them in Ukraine.

The British government is determined to increase its arms and military spending at a time as presiding over major cuts to living standards domestically. They are using the cover of the war to do so. Most people in Britain are sympathetic to the Ukrainian people and are against the war. They can see the misery already caused and the potential for far worse.

This sympathy should not be harnessed to further warmongering or for support for NATO expansion. That includes further arms deliveries and sanctions. The Ukrainian government is not free from criticism, whether through its banning of left parties, or its ever stronger demands for more weapons. Its President Zelensky allowed a member of the far-right Azov battalion to speak during his address to the Greek parliament, something which has caused outrage across the political spectrum there.

The left has a strong tradition of opposing war and campaigning for peace. To do that effectively we have to tell the truth about any government’s involvement in its own wars, but also about its military alliances. We also need to reject a logic which says that we cannot criticise its foreign policy when there is war in Europe. It is precisely now that we need to campaign over its priorities: money for war but not for the poor; and the development of a new phase of imperialist conflict that threatens us all.

Graphene is being transmitted from the Vaccinated to the Not-Vaccinated; destroying red blood cells and causing blood clots