You know you are being aggressively propagandized about Ukraine by the mass media and by Silicon Valley. You can feel it in your guts. Everyone can feel it, on some level. It feels gross. 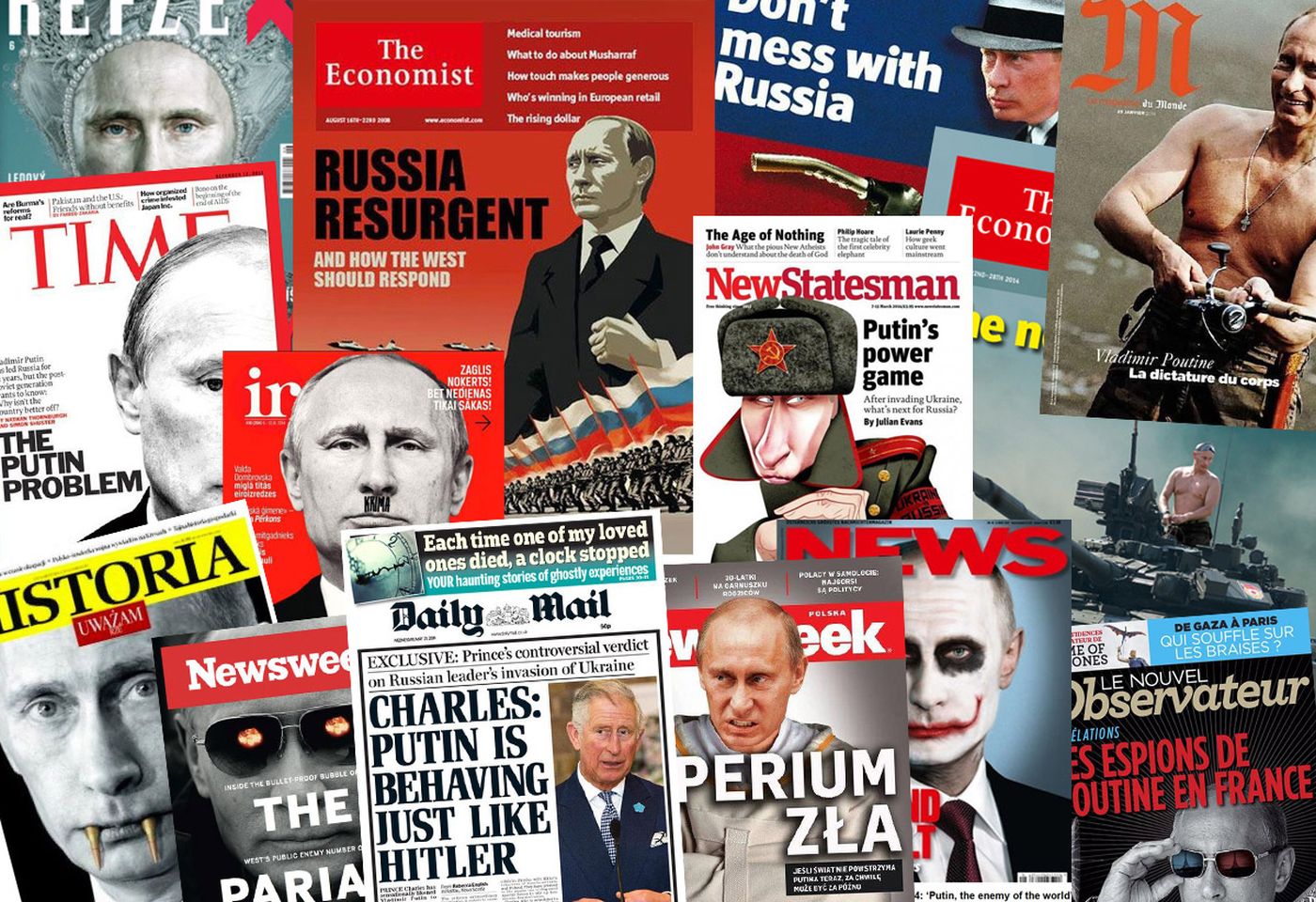 The split on this issue is between those who trust this gut feeling and those who choose to psychologically compartmentalize away from it. Because if you don’t compartmentalize away from it, the implications of this are very frightening. It means pretty much everything you’ve been told your whole life about the government, about your nation, about the news media, and about the way the world works, has been a lie.

But that is the basic reality. If you’ve already seen this, you won’t experience cognitive dissonance when you observe it in the unprecedented imperial narrative management campaign we’re seeing with Ukraine. If you haven’t seen it, you’ll likely experience a lot of cognitive dissonance if you try to square your gut feeling that you’re being propagandized about Ukraine with your belief that your favorite politicians and news sources always tell you the objective truth. And you will compartmentalize accordingly.

That’s just how we’re wired. Our consciousness is wired to select for cognitive ease and forcefully reject information which challenges our present worldview. Pushing past the cognitive discomfort and facing reality is the only way to come to real understanding.

Look at this picture: 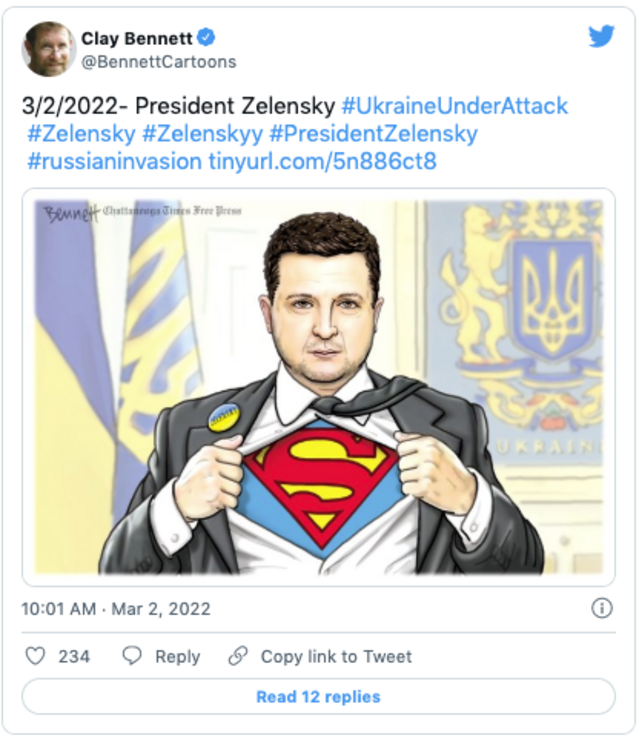 If this picture was printed out and framed, and then used as a bludgeon to bash you in the face whenever you looked at an electronic screen, it would feel how all this Ukraine war propaganda feels when you haven’t swallowed the official narrative.

People get outraged when somebody say we are being aggressively propagandized about Ukraine, but this fact is not seriously in dispute. The mass media have been relatively straightforward about it, though of course they fail to mention their own role in the propaganda campaign.

It seems like those who are new to the concept think that “propaganda” means making up fictional stories whole cloth, so they mistakenly assume that this is a claim that Russia never invaded and Ukrainians aren’t dying and suffering. But all it really means is that the narrative framing is manipulated. They’re not lying that there’s a war, they’re just manipulating the way people think about the war. How it’s happening, who’s to blame for it, whose agendas are served by getting it started and keeping it going, etc.

No good liar lies all the time. The best liars very seldom tell full-blown lies, always preferring to lie by omission, by distortion, by half-truth, by disproportionate focus, and by uncritically reporting other people’s lies in a way that suggests they’re true.

It’s all moving so fast now. Censorship and propaganda, the two arms of imperial narrative control, are escalating like nothing we’ve ever seen before. The doors on information control are being slammed and bolted shut all around the world as fast as the empire managers can get away with it.

And of course Australia is on the front line of this war against consciousness sovereignty: 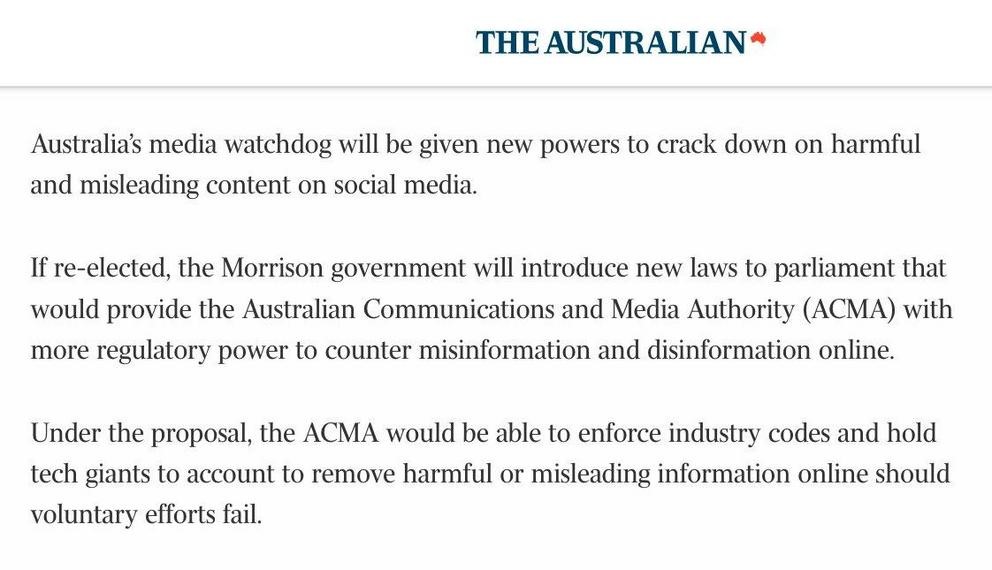 And it’s because of all this intrusive perception management that we’re somehow simultaneously the closest we’ve been to nuclear war since the Cuban Missile Crisis, yet still collectively focused more on talking about sports and celebrity gossip as though everything is fine and normal.

This is something we could actually oppose, if enough of us had enough unpolluted information about what’s happening. This threat is not some inevitable force of nature that is happening to us, it’s something that is being done to us. By people. People with names and government offices.

If the nukes do start flying and we find ourselves in our final moments, will we really feel okay about having done nothing about it? About failing to mobilize in favor of de-escalation and detente? About being the first species in history to go extinct due to psychological compartmentalization and a reluctance to annoy government officials?

The only thing sadder than watching the world die would be watching it die without having done anything to try to save it.

The saying that it’s easier to imagine the end of the world than to imagine the end of capitalism is directly related to people’s inability to imagine anything other than increasingly aggressive escalations between nuclear powers in the competition-based systems we live under. People literally cannot imagine any deviation from this power struggle between nations, even if continuing along this trajectory means our complete annihilation. 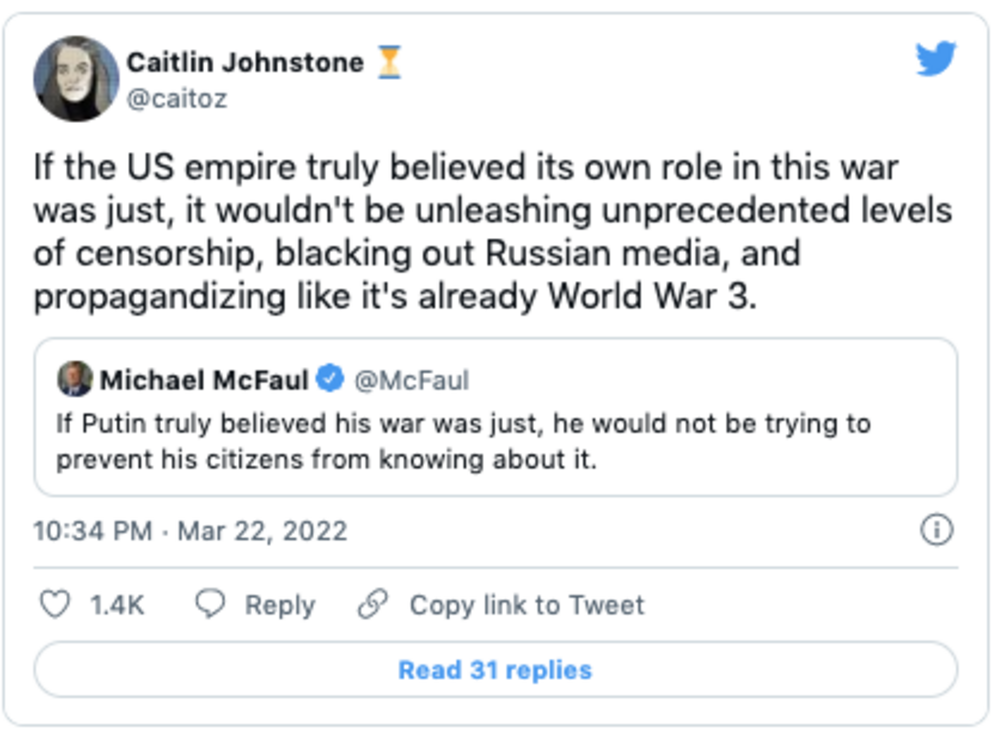 Michael Parenti said years ago that the ultimate neocon plan (which today has become simply the mainstream orthodoxy on US foreign policy) is a confrontation with disobedient governments, the ultimate target being China, to ensure the supremacy of American global capitalism. There’s no good reason this needs to happen. There’s no good reason the defensive Russia-China tandem described years ago by Gilbert Doctorow needs to be targeted in the way it’s currently being targeted by this war that was deliberately provoked by western powers.

We can simply move from endless escalation to diplomacy, from diplomacy to de-escalation, from de-escalation to detente, from detente to true peace, and from true peace to collaboration and human thriving. The only thing stopping that from happening is this insane drive to dominate.

The Great Reset Will Render All Products As Services, To Implement ‘You Will Own Nothing’ By 2030