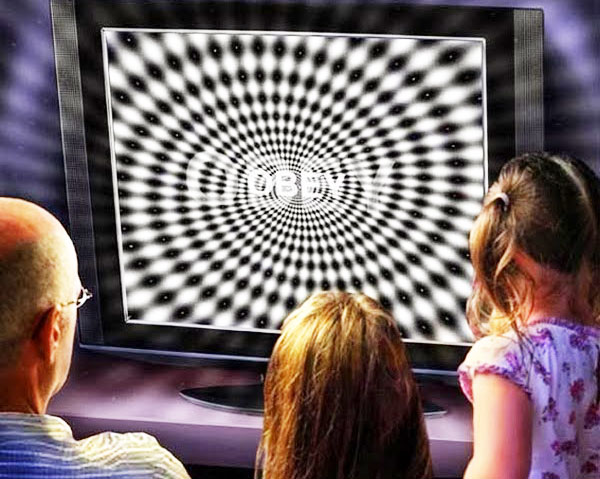 I’m constantly amazed by the ability of those in power to create a narrative trusted by a gullible non-critical thinking populace. Appealing to emotions, when you have millions of functionally illiterate, normalcy bias ensnared, iGadget distracted, disciples of the status quo, has been the game plan of the Deep State  for the last century.

Americans don’t want to think, because thinking is hard. They would rather feel. For decades the government controlled public education system has performed a mass lobotomy on their hapless matriculates, removing their ability to think and replacing it with feelings, fabricated dogma, and social indoctrination. Their minds of mush have been molded to acquiesce to the narrative propagandized by their government keepers.

With a majority confused, distracted, malleable, willfully ignorant, and easily manipulated by false narratives, heart wrenching images, and fake news, the Deep State henchmen have been able to control the masses with relative ease. The unanticipated rise of Donald Trump to the most powerful role in the world gave many critical thinking, anti-big government, skeptical curmudgeons hope he could drain the swamp and begin to deconstruct the massive out of control Federal bureaucracy.

His rhetoric during the campaign about repealing the disastrous Obamacare abortion, cutting taxes, dismantling Federal regulatory red tape, making Mexico pay for the wall, dumping Yellen, favoring higher interest rates, and not interfering militarily in countries who are not threatening the United States, appealed to many libertarian minded people.

I’ve watched with disgust as the promises of non-interventionism by a presidential candidate have been broken by the third consecutive president. George W. promised a humble foreign policy with no nation building. He had criticized the Clinton-Gore Administration for being too interventionist:
“If we don’t stop extending our troops all around the world in nation-building missions, then we’re going to have a serious problem coming down the road. And I’m going to prevent that.”

With 9/11 as a convenient excuse, he invaded sovereign countries based on flawed data, passed the 4th Amendment destroying Patriot Act, allowed neo-cons to create a Orwellian surveillance state, and permitted the military industrial complex to regain its power and control over the political apparatus in Washington D.C. With no Cold War to fill their coffers, neo-cons in Congress, warmongering think tank co-conspirators, military brass and their arms dealer cronies needed to create a new war to keep the racket going.

The War on Terror is unwinnable because you can’t defeat a tactic, and that is just what the Deep State is counting on. An unwinnable war, like the War on Drugs and War on Poverty, results in never-ending funding, no evaluation of success or failure, continuous propaganda designating new enemies whenever convenient, and a narrative questioning the patriotism of anyone who argues against foreign interventionism.

After Bush’s reign of error, the election of a liberal community activist as president surely would result in a dramatic reduction in military intervention around the world. It was so certain, Obama was awarded the Nobel Peace Prize for just being elected for promising hope and change. He ran against neo-con tool McCain who never met a country he didn’t want to invade.

Obama’s words as a candidate echoed those of Bush Jr. before he was placed on the throne by the powers that be. “We continue to be in a war that should never have been authorized. I am proud of the fact that way back in 2002, I said that this war was a mistake.”

After being elected Obama immediately changed his tune about the business of war. He withdrew troops from Iraq as required by the agreement signed by Bush with the Iraq puppet government, but he ramped up the never-ending Afghanistan war – now sixteen years old and still not won.

The vacuum left by our epic failure in Iraq allowed the rise of ISIS. Obama essentially created ISIS by providing arms to “moderate” rebels fighting Assad in Syria.

By the end of his term, troops were back in Iraq and more are on the way. Obama and a Secretary of State named Clinton decided to overthrow Gaddafi even though he posed no threat to U.S. interests. They have left a lawless chaotic failed state, now home to ISIS, Al Qaeda, and various other terrorist factions.

Obama should have won the Nobel Drone Prize as he launched ten times as many attacks as Bush, killing thousands, blowing up wedding parties, and murdering hundreds of innocent civilians. He bombed seven countries even though we are not officially at war with anyone. He renewed all aspects of the unconstitutional Patriot Act. Edward Snowden  revealed the mass surveillance on all Americans by Obama’s spy agencies.

His continued support for the overthrow of Assad, so Saudi Arabia and Qatar could build a natural gas pipeline to Europe, was thwarted by Putin. Hysterically, after eight years of war mongering and expansion of the warfare/welfare surveillance state, Obama is now portrayed as a pacifist. The fact is Obama, like Bush, filled his role in the imperial empire, policing the world, enriching the military industrial complex, and doing the bidding of his Deep State sponsors.

Now we have Donald Trump, the billionaire champion of the common man, who campaigned on getting out of the nation building business. Where have I heard that before? Exactly one year ago, Trump gave a foreign policy speech laying out his vision for the U.S. role in the world.

“We’re getting out of the nation-building business and instead focusing on creating stability in the world. However, unlike other candidates for the presidency, war and aggression will not be my first instinct. You cannot have a foreign policy without diplomacy. A superpower understands that caution and restraint are really truly signs of strength. Although not in government service, I was totally against the war in Iraq, very proudly, saying for many years that it would destabilize the Middle East. Sadly, I was correct, and the biggest beneficiary has been has been Iran, who is systematically taking over Iraq and gaining access to their very rich oil reserves, something it has wanted to do for decades.”

He scorned Obama and Bush’s foolish attempt at creating western style democracies in 3rd world den of snakes, inhabited by factions of Muslim religious fanatics. He railed against the trillions wasted fighting worthless wars, leaving countries in anarchy, and allowing terrorists organizations like ISIS to fill the vacuum. His arguments sounded like they were being spoken by Ron Paul. He clearly ran as a non-interventionist. 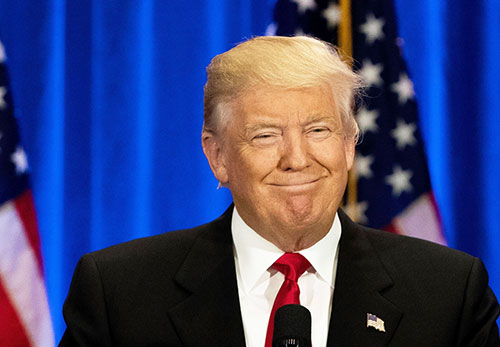 “We went from mistakes in Iraq to Egypt to Libya, to President Obama’s line in the sand in Syria. Each of these actions have helped to throw the region into chaos and gave ISIS the space it needs to grow and prosper. Very bad. It all began with a dangerous idea that we could make western democracies out of countries that had no experience or interests in becoming a western democracy.

We tore up what institutions they had and then were surprised at what we unleashed. Civil war, religious fanaticism, thousands of Americans and just killed be lives, lives, lives wasted. Horribly wasted. Many trillions of dollars were lost as a result. The vacuum was created that ISIS would fill. Iran, too, would rush in and fill that void much to their really unjust enrichment.”

Trump rationally promised to have peaceful relations with the other two nuclear superpowers. He was diplomatic, lucid and non-confrontational when talking about the two countries neo-cons love to hate. His promises of improved relations lasted about as long as it took the Deep State to create a blatant false flag in Syria.

“We desire to live peacefully and in friendship with Russia and China. We have serious differences with these two nations, and must regard them with open eyes, but we are not bound to be adversaries. We should seek common ground based on shared interests. Russia, for instance, has also seen the horror of Islamic terrorism. I believe an easing of tensions, and improved relations with Russia from a position of strength only is possible, absolutely possible. Common sense says this cycle, this horrible cycle of hostility must end and ideally will end soon. Good for both countries.”

There seems to be a common theme when it comes to how all presidents end up doing the bidding of the military industrial complex as soon as they settle into the Oval Office, no matter what they said during their campaigns. Trump is the latest example of talking diplomacy, no nation building, non-interventionism, and not putting boots on the ground, and then doing the exact opposite within weeks of taking office.

The game plan is tried and true. The Deep State either creates or provokes a false flag event to set in motion the pressure to respond militarily. They utilize their propaganda emitting media mouthpieces to spread disinformation and create the opinions of the non-critical thinking masses. Dramatic visual images and a storyline with an evil villain are essential to properly influencing a pliable, easily misled, oblivious public.

The Ancient Tibetan practice for Health and Vitality