Trump, Armageddon which is about to unleash, clutching Satanism and the Deep State (III) 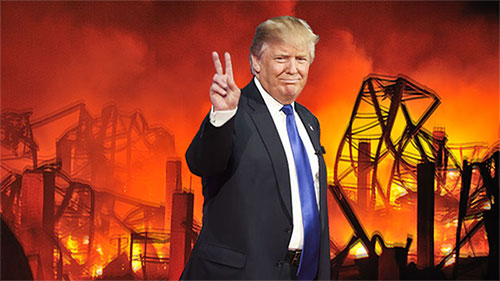 A Not So Coincidental “Coincidence”

When a planeload of nuclear weapons is hijacked by an extremist organization tied to the highest levels of power in America, we might ask, why then? What was going on in America in August 2007? Why were 6 nuclear weapons stolen at the exact same time America suffered the largest financial collapse, became the victim of the largest financial crime in world history? Was this a coincidence?

We know for sure:
– This was the 12th hour, the last minutes of the 12th hour, the last chance to win a war with Iran. Iraq had been temporarily “stabilized” by massive bribes paid out under General Petraeus’ Sunni Awakening program, a “band-aid” fix that would soon come apart, Afghanistan had become a hopeless quag-mire and the public had turned on President Bush, giving him the lowest approval ratings of all time, leaving his presidency failed and discredited.
– What had begun as a minor mortgage crisis had revealed a deeper “disease”, much more insidious than the “toxic derivitives” schemes that would collapse America’s entire financial system. Only 5% of the mismanaged funds were mortgage related, 95% was a massive Ponzi scheme by “banks” that had taken to creating wealth out of thin air, underwriting the entire American economy, bond and stock markets, corporate earnings, pension plans, all backed by nothing at all. The money most Americans thought they had wasn’t even the “counterfeit” trash spewed by the Federal Reserve. It was, in fact, imaginary, soon to be gone, like a soap bubble.

How could 6 nuclear weapons, providing this was the only theft, something we may never learn, be used to cover the crimes of America’s entire financial community? What use of weapons of mass destruction would have changed the public’s perception, a public increasingly suspicious of the other great “coincidence” of all time, 9/11?

Were these weapons to be taken outside the country to attack others, or were they to be brought back, as a container in a seaport, as a vending machine in a stadium, as a missile targeting the U.S.? For years, the front men for the secret government, the ones easily recognized, had done little but prepare America for such an eventuality. With $12 trillion dollars “missing” from the budget, would the incineration of an American city be enough to justify the loss? 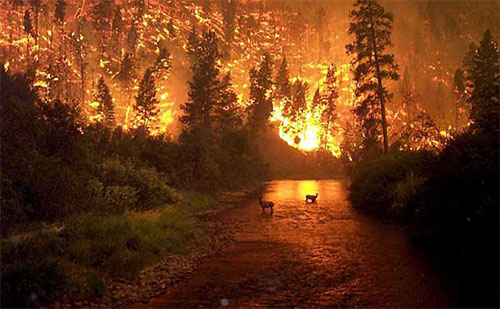 During the Cerro Grande Fire which caused the entire evacuation of the County of Los Alamos – in May 2000 – the fire burned so hot that guardrails along the road were melted. Here native elk seek refuge in a stream against that roaring-like-a-freight-train inferno, with its 65-mph winds allegedly created by Nature’s convection oven of wildfire. What was the real cause, or better said, the real purpose of setting this fire?

Professional law enforcement personnel, where such things still exist, look at any criminal act in three stages, which they call “Means”, “Motive” and “Opportunity”. In our case, means and motive are not obvious at all, not unless one is willing to accept that top commanders of the United States Air Force are traitors.

Let’s examine a frightening trend that may have led to this seeming vulnerability. How could the United States Air Force have been infiltrated with commanders loyal to power structure outside any accepted norm? What kind of values would make this possible? To understand the breakdown in command in the Air Force, we must look at the Air Force Academy in Colorado Springs.

The “Talibanization” of the U.S. Air Force

Several months ago, Veterans Today was contacted by a delegation of officers candidates attending the Academy. They told us that the Academy was run by a religious cult, known as Dominionists. This group, this cult, violent, predatory, accused of “brain washing” recruits, tormenting, intimidating, is rapidly gaining total control of the officers corps of the United States Air Force. Their agenda is a strange version of Evangelical Zionism, subservience of women, bizarre beliefs in nuclear apocalypse and, worst of all, a total disregard for Constitutional authority and legal command structure.

Would this group be capable of stealing nuclear weapons which might be used against the United States? The only answer is a resounding “Yes!”

Can the beliefs of a bizarre religious cult constitute motive for nuclear theft? Does this cult have enough “means” and “opportunity” to attempt this kind of operation, one possibly meant to bring about a nuclear apocalypse and trigger the “end times” as required by their peculiar beliefs?

What America has proven to the world, at least to those nations with a free press and a people still capable of critical thinking is that, not only is the nuclear arsenal of the United States the most vulnerable, but also those guarding it are the most radicalized and the most prone toward acts of terrorism.

America’s nuclear arsenal has been guarded by a Taliban for decades. What could the motive for this be?

The Taiwan question and more

An American B-52 was forced to land and hand over its cargo of nuclear weapons at Barksdale Air Force Base in Louisiana and 80 Air Force personnel were forced to resign. Problems with “discipline” were listed as the reason. The Air Force calls the incident a “bent spear” a simple violation of procedure. 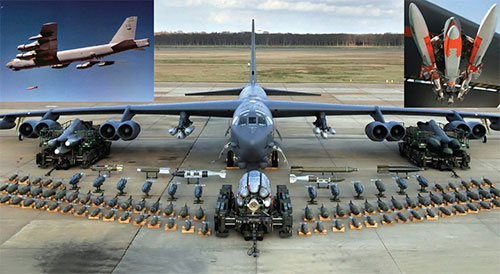 Despite the public whitewash, the “bent spear” was clearly, not only a “broken arrow” but as Senator Levin indicated, “no breach of nuclear procedures of this magnitude has ever occurred.” Senator Bill Nelson called it “sloppy”. But it wasn’t even the first time such a thing has happened.

In 2006, “nuclear fuses” for the Minuteman III missile (at least this is the official version) were sent to Taiwan, packaged as “helicopter batteries.”

At that time, the Minuteman was undergoing major upgrades, not only in safety mechanisms but in targeting capability also. The “fusing” units that were available for shipment weren’t simply fuses, they were designed to upgrade our aging fleet of Minuteman missiles, America’s state of the art targeting technology for our most important deterrent system.

What really happened? Certainly not what we were told. We could ask ourselves: does Taiwan have the technology, having adapted it to systems they have purchased elsewhere, nuclear triggers, perhaps they have one or more of the nuclear weapons believed to be missing from the Israeli-South African arsenal? Moreover, we could go on asking: did they keep the technology or sell it to China or India? Was this another accident?

In October, 2010, 50 Minuteman III missiles, 1/9th of those in America’s arsenal, went “walkabout” for 45 minutes, under the control of, well, we don’t really know. We only know that the official government of the United States didn’t have them, enough nuclear megatonage to turn Europe into a cinder.

A month later, an ICBM was launched from a submarine 35 miles off Los Angeles. The US claimed it was an airplane, then it claimed it was in fact a weather balloon but missile technicians identified it as a large ICBM, unknown origin, unauthorized and, as with the murder of John Wheeler III, something Americans are asked to overlook, forget, pretend never happened.

The shadow “in plain sight”

Normally, hubris, the ego that makes criminal sociopaths want their work appreciated, whether it is looting banks or raping and murdering busloads of small children, has negative consequences. When Vice President Cheney established a special operations command inside his own office, one that directed military and intelligence operations without budget approval or legal oversight of any kind, he was demonstrating the hubris of a criminal psychopath.

What could it be legal in all these, even by the standards of a lawyer and politician such as Alberto Gonzales?

It is one thing for a nation state to resort to torture, kidnapping or even acts of military aggression, backed by attempts at justification such as those seen in 2003 by Colin Powell at the United Nations. Powell lost his career, the respect of the world; and America was branded a rogue nation and aggressor. 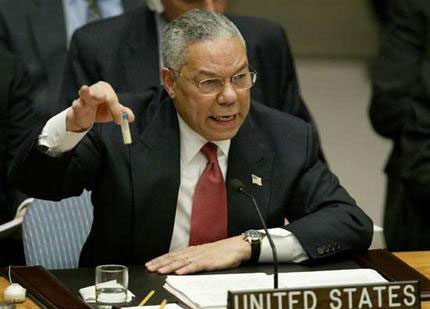 When an elected official, such as the Vice President, an office tasked with attending funerals and, in actuality, nothing else, begins, not only formulating policy outside the office of the presidency but conducting military operations on its own authority, an authority that does not exist, no law, certainly not the Constitution, then the individual holding that office is in insurrection against the government of the United States.

The vice president can’t order kidnappings, killings by the dozen, maybe hundreds or more, can’t command troops in the field, the vice president is the Commander in Chief of nothing whatsoever. There is no command authority of any kind, real or implied, in that office nor can any be assigned or transferred there unless the President of the United States is incapacitated.

The 25th Amendment to the Constitution of the U.S.A., ratified in 1967, contains the following information:

The issue of Vice President Cheney is only germane based on his public assumption of clear presidential and super-presidential authority, extra-constitutional authority, during the administration of George W. Bush. The actions involved, aggressive war, operation of secret prisons, assassinations and more, are capital crimes as outlined during the Nuremberg War Tribunals and subject to international jurisdiction. 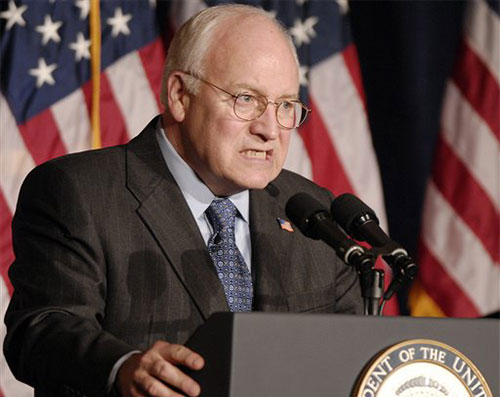 Do these acts, the ones Cheney (and Rumsfeld) publicly acknowledge, the ones we can prove, combined with coincidences, so many of those, give adequate reason for us to assume a conspiracy, a secret globalist cabal, is acting in place of the intended government of the United States? Has the brush of history, itself, left little room for assumptions otherwise?

Trump: “Get ready Russia, missiles will be coming at Syria, our missiles are nice, are new and are ‘smart’!”

Donald Trump warned Russia to “get ready” after Moscow vowed to shoot any missiles fired at Syria down. “They will be coming, nice and new and smart”, Trump tweeted.
The tweet appears to be an unofficial announcement of the “major decisions” which Trump said Washington would be making afterwards, regarding the alleged chemical attack in Syria.

Trump announcement came after Russia vowed to shoot down any US missiles aimed at Syria. “If there is an American strike, then we… will shoot down the missiles and target the positions from where they were launched,” Alexander Zasypkin, the Russian envoy to Beirut, said. 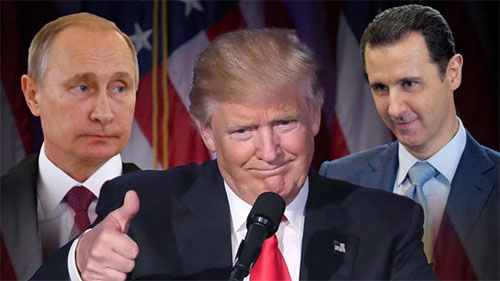 Trump’s allegations also come after the Russian military traveled to the scene of the alleged incident and determined that there was no evidence of any chemical attack.

Trump isn’t the only US official to prematurely point the finger at Assad. US ambassador to the UN, Nikki Haley, was quick to call Assad a “monster” following reports of the alleged attack. She referred to the Syrian government as a “murderous regime.”

8 Reasons Why The West Hates Syria

Evidence of seven levels of infrastructure beneath the Giza…

21 June: The International Day of Yoga

The great covid masquerade: How the number of dead was…

Simion does not lose sight of the government: Discrimination…

The masks are falling at the WHO. The covid-19 pandemic…