The name Ulysses syndrome is a reference to the main character of the Odyssey, who experienced hardship when he left his home. This syndrome manifests in immigrants and can lead to more serious problems such as addiction and other disorders. 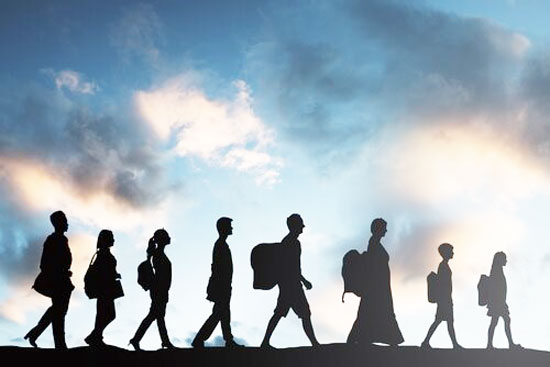 Ulysses syndrome, also known as Immigrant Syndrome of Chronic and Multiple Stress, manifests in people who leave their home to immigrate to a new place. It’s more than the typical grief people experience when they find themselves in an unfamiliar place.

Ulysses syndrome is very similar to other disorders. Thus, it’s easy to confuse it with other mental problems. In some cases, the symptoms are so severe that it’s diagnosed as psychosis. In reality, it’s just a form of extreme stress.

Psychiatrist Joseba Achotegui from the University of Barcelona coined the term “Ulysses syndrome” in 2002. He has studied it exhaustively in Spain, one of the preferred countries to immigrate to. He estimates that approximately 800,000 people in Spain suffer from the syndrome.

Migration is a complex issue, and some countries don’t have the resources to process all their immigrants. There are also many different forms of migration.
Not all migrants end up with Ulysses syndrome. A person’s life story and personality play a big role, along with the conditions of their migration and the environment they migrate into.

A person’s personality matters because it influences how independent and adaptable they are. Starting a life in a new country takes a lot of psychological strength and resilience. It’s not easy to start over in an entirely unfamiliar place, and that change often leads to disorders or causes underlying issues.

The migration conditions also play a big part. It isn’t the same to have to flee a war as it is to simply want to have a better life or be chasing a specific opportunity. Also, some people have to leave their family behind, while others immigrate with their loved ones.

One of the main factors is the person’s new environment, which either makes it easier or harder for them to adapt. The country could also be either socio-economically prepared for immigrants or not. In other words: whether it’s easy for immigrants to get a job or not and whether they get any outside assistance or not.

Ulysses syndrome manifests when someone feels like they’re at their limit but can’t find a way to process it or express themselves. This tends to happen if they feel like they’re going to fail in the new country or fall into a worse economic situation. Thus, their stress builds up until they feel completely blocked.

This is when the symptoms of the syndrome will start to manifest, which include:
• Feeling like an outsider. They feel like an outsider in their environment and everyone else feels like a stranger to them. This leads to fear and a deep sense of vulnerability.
• Constant sadness. They start to long for their home and feel constantly upset.
• Health problems. It’s common for them to start having physical problems such as migraines, nausea, dizziness, shortness of breath, etc.
• Stress and anxiety. This is the most obvious symptom. They’re in a constant state of distress, like they’re expecting something awful to happen. It can also lead them to have trouble sleeping and feel extremely insecure around other people.
• Isolation and self-esteem. They start to shut themselves off from their new environment because it feels threatening. That also starts to impact their self-image and self-esteem.

There are also cases where Ulysses syndrome leads to more serious problems. Some people develop addictions or do illegal things due to the frustrations of not meeting their expectations. In many of those cases, the problem is so severe that they need to see a psychologist.

The Perilous Path Towards Awakening (4)