The Benefits of Meditation

The physical, emotional, and spiritual benefits of meditation have been well documented for thousands of years. Scientists, philosophers, spiritualists, and religious leaders have heralded the power of witnessing awareness. They may refer to it as deep reflection, being present, mindfulness, contemplation, prayer, meditation, or simply relaxing, but it’s all the same thing – disconnecting from the activity and drifting to the space between our thoughts. 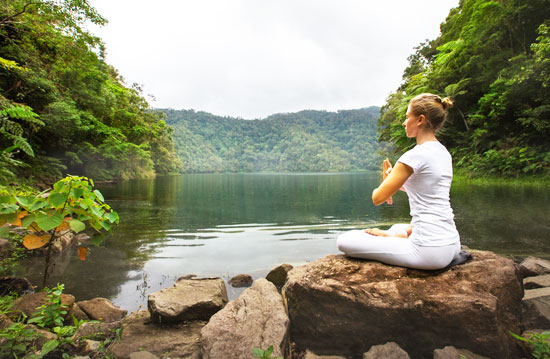 In the Yoga Sutras, written sometime between 200 b.c. and. 200 a.d., the sage Patanjali (who created a common thread that all schools of yoga follow) defined meditation in four Sanskrit words: yoga citta vritti nirodha, which means “one-ness is the progressive quieting of the fluctuations of the mind.”

1. Effects on the Mind, Body and Spirit

Over the first few days, weeks, and months of daily meditation, the quieting impact this simple practice has on your being begins to express itself in each choice you make. Your shift may be so subtle that even you don’t see these meditation benefits at first. But your thoughts, selections, decisions, and daily actions become more conscious, leading to more intuitively conscious behaviors. Then one day you realize you have a broader perspective, a deeper sense of calm, and heightened clarity… yes, greater creativity, expanded grace, greater ease.

You realize you are making more spontaneous right choices. You realize you are being more authentic. There is greater alignment between what you think, what you say, and what you do. These are the myriad effects and benefits of meditation. The world is still turning – and sometimes faster than ever—but to you, that swirl is in slower motion, like texts coming into your cell phone with a really faint hum rather than a blasting ringtone.

2. Stillness, Peace and Quieting the Mind

Over time, moving from activity to stillness during meditation translates into more conscious behaviors during non-meditation (the other 23 or so hours of your day). Your interactions with the world shift more effortlessly from reactivity to responding, from reflexiveness to reflectiveness, from defensiveness to openness, and from drama to calm.

There’s a big bonus regarding the effects of meditation on top of all these other nourishing aspects of having a practice. Over time, meditation benefits you by quieting you to a state where you experience life with a deeper understanding of your true Self, which can open the door to spiritual exploration, connection, discovery, and fulfillment – one of the many spiritual benefits of meditation. It is along the so-called “spiritual path” that you truly can experience your unbounded and unconditioned Self – the infinite you that rests at the core of who you are underneath your body and beneath this worldly garb of titles, roles, masks, ego, and the complexities of this life.

Regardless of the depth of your spiritual nature, simply by spending time in stillness and silence, you will experience the benefits of meditation and become more imbued with the ability to open to greater possibilities in each moment instead of the ones you were fixed on.

This creates a more universal trajectory for the rest of your life with an expanded point of view. By seeing yourself as more universal and less personal, you’ll realize more options in each moment instead of seeing only the limited ones you thought you had before. Everything in your life becomes richer when you see there are lots of different ways things can play out and your previously constricted viewpoint only made you feel more helpless as life unfolded. But this tool called meditation and its benefits can give you the edge you need to feel strong each day, to gain clarity, and to finally regain your inner peace.

3. Evolving our Brains: The Scientific Research

Different types of meditation styles take you to different places. Some calm you in the moment, others calm you after the moment, some open you, some inspire you, some relax you, some comfort you, others transport you, and some deliver you to a life of oneness and deeper fulfillment. This may sound like a huge leap from the clinical, scientific proof of the power and benefits of meditation, but its current trendiness, and 5,000 years of testimonials should give you the support you need right now to continue exploring.

Over the last several years, thousands of compelling scientific studies have found evidence that a regular, consistent meditation practice can offer a wide range of healing benefits and meditation-linked health benefits. The data include hundreds of clinical studies performed by science and medical departments at major universities, research reports in such venerable sources as The Journal of the American Medical Association (JAMA) and The New England Journal of Medicine, and special features in more popular publications ranging from The Wall Street Journal to Time magazine to The New York Times. There is now compelling evidence that meditation is a powerful tool in managing anxiety and stress, pain relief, restful sleep, cognitive function, and physical and emotional well-being.

Meditation Changes the Physical Structure of the Brain

In the January 30, 2011, issue of Psychiatry Research: Neuroimaging, Massachusetts General and University of Massachusetts Medical School reported results of a clinical study on meditation benefits that demonstrated that meditation can actually transform our brain.

Using MRI brain scans at the beginning and end of the eight-week trial, scientists discovered that each of the 16 subjects who meditated for 30 minutes every day experienced visible changes to the physical structure of their brains. Within 56 days, each subject’s MRI displayed an increase in the gray matter in the hippocampus (the part of our brain responsible for learning, spatial orientation, and memory) and a reduction in the gray matter of their amygdala (the fear, stress, and anxiety center of the brain).

So if you were wondering whether meditation’s health benefits will show up in your life, the answer is a powerful yes! In less than two months, the brain can change its physical structure and the way it’s wired – all from a daily practice of 30 minutes. 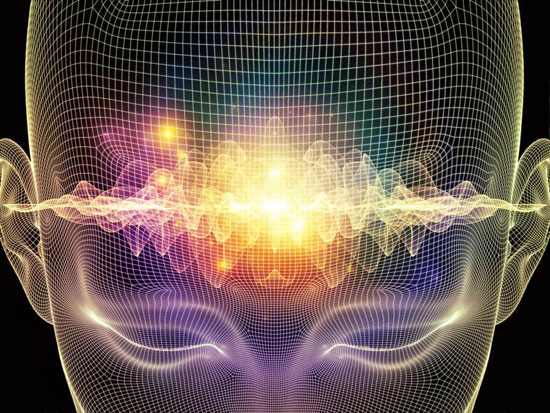 A recent brain-wave study by Dr. Richard J. Davidson at the University of Wisconsin tested meditating monks (they could be referred to as super meditators since each had 34,500 hours of meditation under their belts) and non-meditating volunteers on their responses to pain and the threat of pain to explore potential benefits of meditation on pain perception.

What’s the takeaway here? The non-meditating world reacts first to the hint or projection of pain in the future and reacts as if it were feeling the pain now. The meditators stayed in the present moment longer and did not actually feel pain when the threat of pain was announced.

This study might have the most profound insight that we can remove and lessen suffering in our lives if we don’t project ourselves into the future and manufacture potential suffering. Yet most of our life is played out in the future as our hopes, dreams, wishes, and needs, weave into expectations and we start reacting to scenarios yet unborn as if we were clairvoyant.

The effects of meditation will help you immeasurably in this process because one of meditation’s benefits is to help you stay mindful of the present moment. So the evidence is in. And, these two studies demonstrate the transformational power that meditation can have on our physical body and on our emotional response to the world around us.

Finally, after thousands of years of eye-rolling by naysayers, the value and benefits of meditation are validated scientifically in a laboratory with the most advanced technology to monitor the brain. And the results of studies like these in medical centers and institutions of higher learning continue to be published for the world to access. Yet the most transformational results and effects of meditation can only truly be felt by the one having the experience. That can happen with your very first meditation. And you’re already there!

How Meditation Changes Our Physiology

During meditation, specific physiological shifts occur. These shifts are cumulative, and over time, they can transform the way our bodies and minds balance themselves and integrate with each other. The most powerful proof that meditation benefits the entire being (body, mind and consciousness) lies at the very core of our DNA, in a primal survival response we all have shared for millennia: the fight-or-flight response.

As human beings evolved more than 20,000 years ago, we were hardwired with a self-preservation reflex – a powerful survival mechanism woven into our DNA – known as the fight-or-flight response. It was first described by American physiologist Walter Cannon in 1929 and explains what happens to our body’s most primal brain functions when we sense a threat to our physical body – essentially how we react when something crosses our perceived boundary of safety. When we perceive a life-threatening situation, we react in the moment and choose one of two basic paths of survival: to fight or to run. One of the benefits of meditation is that it gives us a choice in situations like these instead of reacting automatically.

Essentially, it works like this: Imagine you’re hunting and gathering in a jungle during prehistoric times, when you hear a sabertoothed tiger make a loud hiss. On perceiving this threat, your body’s limbic system (which can be positively affected through meditation and controls emotion, behavior, memory, and your sense of smell) immediately responds via your autonomic nervous system, a complex network of endocrine glands that automatically regulates your hormonal chemistry and metabolism.

The Body Reacts to a Threat 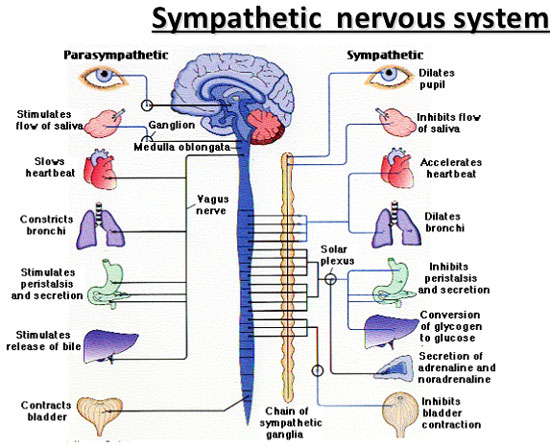 On hearing the saber-toothed tiger, your sympathetic nervous system (which is the part of the autonomic nervous system that regulates all our body’s functions) rapidly prepares you to deal with what is perceived as a threat to your safety. It essentially says, “There’s a good chance you will become this predator’s dinner, but if you fight or run away, you could live.” It then goes on a lightning quick mission to help you achieve that goal. First, you begin to perspire. Your limbic brain knows that if you do end up fighting or fleeing, you will most likely overheat, so the fastest way to bring your temperature down is by automatic sweating.

Next, your hormones initiate several metabolic processes that help you cope with sudden danger. Your adrenal glands release adrenaline (also known as epinephrine) and other hormones that speed up your breathing, spike your heart rate, and elevate your blood pressure, quickly driving more oxygen-rich blood to your brain and to the muscles needed for fighting the saber-toothed tiger or for running away.

All of this happens before you’ve had an intellectual conversation with yourself about the impending danger. In fact, the threat could be real or imagined, but if the limbic brain perceives it, you will automatically respond in seconds as if the threat is real (however, regularly practicing meditation benefits this part of the brain by allowing it to stay calmer).