Use of Oxytocin in Dairy Animals and Its Harmful Effects (2) 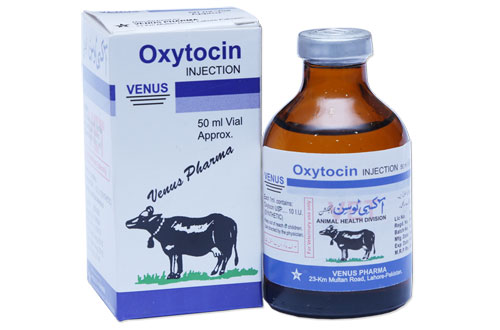 The rationale of Experiment 1 was to generate normative cues for altruistic responding toward refugees, on the basis of an incentivized donation task framed in the context of Europe’s refugee crisis. This paradigm was composed of 50 authentic case vignettes briefly describing the personal needs of poor people, half of which were portrayed as refugees (outgroup) and half as natives (ingroup), respectively. The personal needs comprised those elements the United Nations has defined as minimum standards for leading a safe and dignified life; that is, access to food, adequate housing, or participation in social and cultural life. Assignment of cases to ingroup / outgroup frames was balanced across participants to rule out systematic bias. Subjects were endowed with 50 Euros and could donate a maximum of 1 Euro to each case, leaving them the rest (0–50 Euro) as personal payoff. Before testing, subjects’ prejudicial attitudes toward refugees was assessed by measuring their individual xenophobia index (Xi).

In Experiment 1, a total of 76 healthy female (53) and male (23) undergraduate students (mean age 21.2 ± 3.0 years) completed the donation task. For the purpose of generating an altruistic norm, subjects were assembled in a lecture hall, enabling reputation pressures to prompt potential donors to respond more generously. Indeed, results show that participants contributed more than 30% of their endowment. Interestingly, the donations devoted to refugees were 19% higher (8.03 ± 6.74 Euros) than those to natives (6.71 ± 6.86 Euros). This bias indicates an altruistic preference for the outgroup and was lowest in Xi high scorers (r = −0.34; P < 0.01) (Fig. 1A). An additional analysis including gender as a between-subject variable showed that neither the donations to natives and refugees nor the outgroup bias (donations to refugees minus donations to natives) was influenced by gender (all P ≥ 0.86). 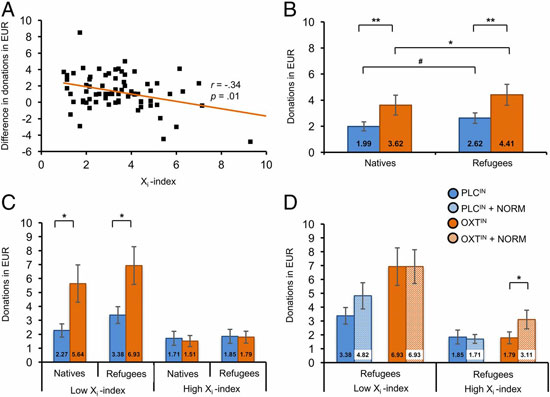 Figure 1. The sociobiological conditions that reduce the effects of xenophobia by facilitating prosocial behavior toward refugees. (A) In Experiment 1 (n = 76), altruistic donations for the outgroup were lowest in those scoring high on the Xi index (scores ranging from 1 = low to 10 = high). (B) In Experiment 2, an independent sample of 107 male participants received intranasal oxytocin (OXTIN) (n = 51) or placebo (n = 56) before the donation task. OXTIN promoted a 68% (outgroup) and an 81% (ingroup) increase in the donated sums. (C) Based on the subjects’ Xi scores from the 7-item scale of the realistic threat inventory, the sample was median-dichotomized (n = 54 Xi low scorers; n = 53 Xi high scorers). Xi low scorers who received OXTIN (n = 26) more than doubled their donations to both groups, whereas the peptide did not induce generosity in Xi high scorers (n = 25). (D) Pairing OXTIN with peer-derived norms in Experiment 3 prompted Xi high scorers to increase their outgroup-related donations by 74%.
OXTIN + Norm, intranasal oxytocin paired with a peer-derived norm;
PLCIN + Norm, intranasal placebo paired with a peer-derived norm.
Error bars indicate the SEM. #P = 0.056; *P < 0.05; **P < 0.01.

Experiments 2 and 3 were carried out within the same randomized controlled trial and involved an independent sample of 107 male participants (mean age 24.1 ± 3.2 years). Before testing, their prejudicial attitudes toward refugees were measured by the Xi index. Subjects self-administered a 24-IU dose of OXTIN or placebo (PLCIN), which was instructed and supervised by a blinded experimenter in accordance with the latest standardization guidelines. Subsequently, subjects were placed alone in separate test cubicles and tested on the donation task established in Experiment 1 (Fig. S1). Based on the subjects’ Xi index, the sample was median-dichotomized, resulting in n = 53 Xi high scorers and n = 54 Xi low scorers. 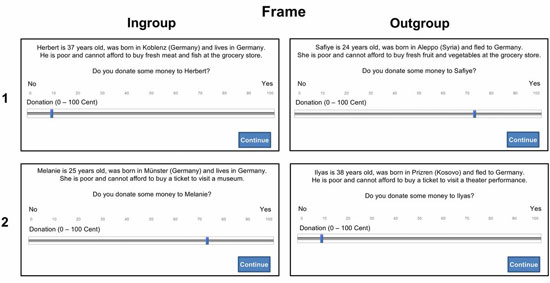 Figure S1. Task design of Experiment 2. Given are corresponding examples of ingroup and outgroup case vignettes presented in Experiment 2. In total, the task consisted of 50 such vignettes briefly describing the personal needs of poor people, half of whom were framed as refugees (outgroup) and half of whom were framed as natives (ingroup), respectively.

To address the question of whether administration of a peer-derived altruistic norm in addition to OXTIN could augment altruistic responses in Xi high scorers, the task was reiterated in Experiment 3, with the exception that this time, each case presentation also included information about the average contribution choices of all their male and female peers enrolled in Experiment 1 (Fig. S2). A repeated-measures ANOVA with “norm” (present, absent) as an additional within-subject variable revealed a three-way interaction among treatment, Xi index, and norm [F(1,103) = 5.51; P = 0.02; η2 = 0.05]. 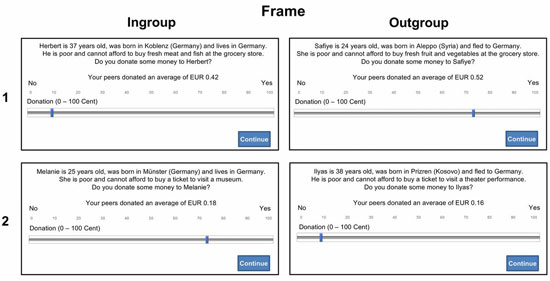 The Science of Energy Medicine: How to Work With Subtle Energy for Better Health (I)