What We Do and Don’t Know About Microplastics and Health

Plastics – especially single-use plastics – are an enormous part of our daily lives. Straws, plastic silverware with takeout food, and the containers you eat your meal out of are all designed to be used once and then discarded. Once it ends up in the trash, chances are good your single-use piece of plastic will end up in a landfill or the ocean.

Over time, since it doesn’t decompose, these plastic items break down into tiny pieces, many of which are smaller than you can see with the unaided eye. 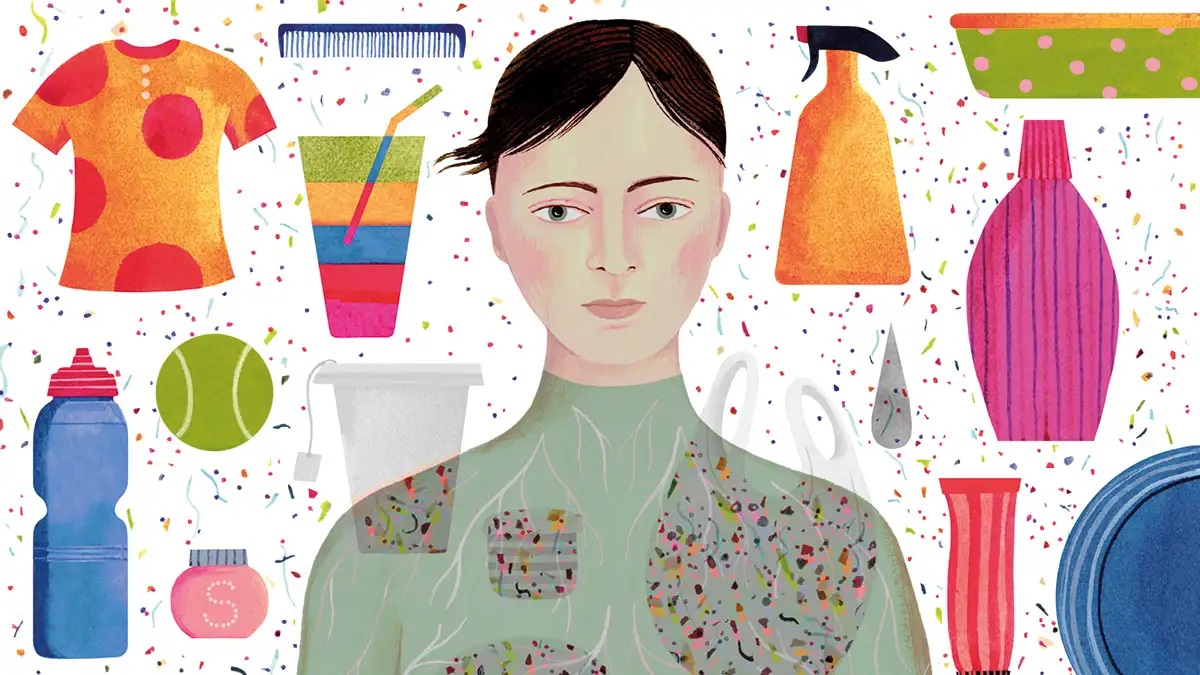 These minuscule pieces of plastic, dubbed microplastics, might not seem like a big problem, but their impact is expansive. What do we know about microplastics and how they could impact our health? More importantly, what don’t we know yet?

Scientists define microplastics as plastic fragments less than 5 mm in size. This definition could apply to anything from microbeads added to beauty products to aid in exfoliation to glitter made from tiny fragments of colored plastic.

It could also describe larger plastic items broken down over time by weather or impacts. Artificial textiles like polyester can also shed tiny fibers that qualify as microplastics.

The small – often microscopic – size of these microplastic particles means scientists find them everywhere. They follow ocean currents to the deepest depths and get whipped up in the air, riding the clouds to the farthest corners of the Earth. Rain and snow carry them back down, thousands of miles from where they entered the water cycle.

Researchers have found them in snowfall in both the Arctic and Antarctic regions. The disposable coffee cups you use each morning and the plastic water bottles you drink from throughout the day all have the potential to shed both chemicals and microplastics during use.

Microplastics in the Food Chain

We all know how the food chain works. One animal eats the next until you reach the apex predator at the top that eats everything.

Plastics are already a problem for animal life, especially in the ocean. Turtles are prone to filling up on plastic shopping bags, thinking they’re eating jellyfish. They believe they are full when they’re actually starving to death.

Microplastics present many of the same risks, but instead of starving animals filling up on plastic, it is infiltrating the food chain. Animals consume these microplastics, and before the particles make their way through the animal’s digestive system, they get eaten by the next predator up the food chain.

These plastics also tend to bond with environmental toxins before they’re consumed, bringing those poisons into the animal’s body and allowing them to make their way up the food chain. If humans eat these animals, they’re consuming those microplastics.

Since humans are considered apex predators and nothing is eating them, those plastics can accumulate. Research shows that humans consume about 120,000 microplastic particles each year.

Microplastics in the Human Body

We’ve discovered that these particles can exist in the bloodstream and lung tissue and may even be able to cross the blood-brain barrier. Another frightening study found microplastics in placentas, potentially impacting fetal health.

We aren’t simply consuming these microplastics and excreting them. They’ve become a potentially dangerous part of human existence.

What Don’t We Know?

The problem with microplastics isn’t detecting or finding them in human tissue. It’s in understanding the long-term implications of their presence. Microplastics are everywhere, but we haven’t been studying them long enough to know how they could potentially impact human health in the long term.

That isn’t to say we don’t know anything about microplastics. Most of our information comes from studying marine biology and the impact these substances have on marine life. We’ve seen reproductive changes in fish, swimming abnormalities in shrimp, and problems with mussels causing them to weaken their grip on the rocks they call home.

We also understand the impact these chemicals can have on the human body. Still, those studies usually focus on conventional consumption – such as finding BPA in water bottles – or environmental exposure. The study of microplastics in the human body is in its infancy. We’ve got 10 or 15 more years of research before we start seeing the true impact of these microplastics on our overall health as a species.

We don’t have the technology to get rid of microplastics. Even careful filtering and treatment, like what you’d find in a bottled water plant, isn’t enough to remove it from the food we eat and the water we drink. You can take steps to prevent your shopping and consumption habits from contributing to this already-monumental problem, but avoiding microplastics is all but impossible right now.

Instead, researchers have to focus on the impacts these plastics might have on our health in the future and figure out if there’s anything we can do to combat the long-term effects of microplastics on the human body.