How This All Might Play Out If It Goes Nuclear

Everything is a means to an end.

The transition from covid hysteria to nuclear fear is simply the next progression of the agenda to consolidate government, people, culture, economics, into a singular global structure. Historical empires who sought world domination, always subjugated their victims into the conquering “way of life”. This was primarily done by military brute force, but as we can see now, it has evolved into a much more methodical nuanced strategy. Instead of ramming cultural change down peoples throats through direct threats of death, it’s all about convincing the masses that change is needed. Just like the covid vaccines are the only answer to the problem the globalist’s created, they have the answer for nuclear war ready in their back pocket. 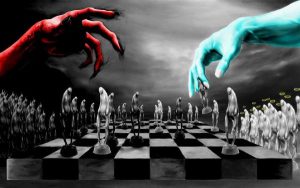 How can you consolidate 195 independent countries into a singular mechanical structure?

You promise safety at the cost of liberty.

They tested the efficacy of this strategy on 9/11 when they created international terrorism. By elongating the threat of a boogieman over decades, they slowly chipped away at your freedoms. The American public, mostly ignorant to their waning rights, didn’t mind as they were convinced the top priority should be eradicating the constructed terrorists by any means necessary. With the globalist’s apparent success in the brainwashing of Americans, they circulated the terrorist threat to Europe. When the narrative of Al-Qaeda had run its course, a new constructed boogieman, ISIS, would take its place.

Globalists then upped the stakes with covid-19. A new costume for the boogieman, but much more powerful, with its reach spanning across the entire planet. No one was safe from covid. The world had to come together in implementing draconian measures to ensure the safety of the masses. Freedoms and liberties were stripped away overnight, and when one strain of covid was nearing its narrative conclusion, another would spring up to take its place. Globalists were already confident in their ability to take away freedoms with the publics consent. Now they wanted to know if they could get you to wear a uniform (masks), take poison (vaccines), and destroy the economy without any questions asked. The answer…absolutely.

We’re now on the cusp of a tremendous global economic implosion. The Fed printing an absurd amount of fiat currency, coupled with covid stalling global commerce, and sanctions on Russia skyrocketing energy and food prices, we’re about to see a great amount of suffering and starvation throughout the world.

Here’s the point where you have to start connecting dots and assuming the globalists next logical step. Globalists need an “event” that the public can blame for their suffering.

The upcoming “monster in the closet” is not nuclear war itself. It is government in countries, who stress the importance of individual freedoms and liberties. The puppets in our governments that have been bribed to do as they are told, in the end, will be sacrificed for the bigger picture. It won’t happen all at once, but there will be a shift in global hegemony that will move the plan along.

If nuclear war does in fact break out, it will be used as the catalyst for showcasing the flaws of having various independent governments. With millions of people vaporized and economies shattered, they will have a strong case for the remaining lemmings that are alive to hear their pitch. No more war, economic hardships, conflicting political entities, private ownership, etc. Everyone will be under the umbrella of a planetary government. Everyone will be safe. There won’t be any more conflicts because there won’t be any more independent countries.

It won’t necessarily mean that geographical borders and unique cultures will altogether disappear, it will mean that a global communist dictatorship resembling China will be implemented. Social credit scores, universal income and rights, constant surveillance of your whereabouts on and off the “meta verse”. These will slowly become part of the “norm” as the globalists control and surveil your every movement and thought. All in the name of global safety.

Well how are they supposed to do that?

It might already be happening. It starts with phasing out the US’ global power (which is still presumably grounded in the philosophy of individual freedom and independence) and replacing it with the hive mentality of communist China. There will be a need to rebuild the world after a nuclear apocalypse (the possible great reset), but it won’t be rebuilt in the image of the US, but rather the communist dictatorship of China. Nuclear war and famine will be used as an example of what happens when the masses are given autonomy to choose their government officials (even though that’s not the case). Too many “moving parts” and criminal entities within governments will be blamed for enabling the ensuing catastrophes to take place. With China at the helm of global hegemony, it will be the poster child for a “functional”, “safe” society. Countries suffering in the wake of nuclear warfare, economic catastrophe and famine, will start to embrace the great reset’s philosophy. We just saw this happen in Ukraine as it has now implemented universal income, social credit scores, vaccine passports, and digital I.D.

The Great Reset Will Render All Products As Services, To Implement ‘You Will Own…

We are all ensnared in the elite’s web