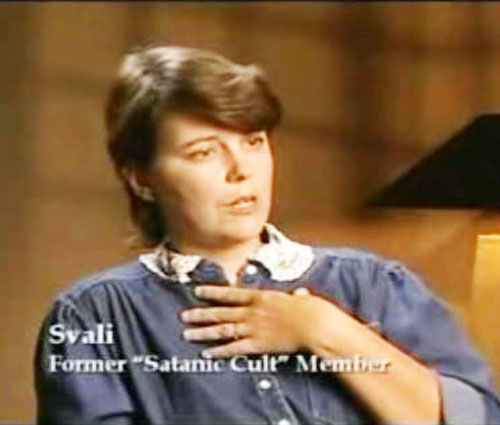 Svali is (or was) an American woman born into an Illuminati bloodline. At the age of 12 she was taken to the Vatican for a “ceremony” that she was told would be very important. What she witnessed – an actual child sacrifice (the child was 3 or 4 years old, and appeared to be compliant) on an obsidian slab over a large pentagram in a basement catacomb – is told in her extraordinary interview with Greg Szymanski.

Svali (a pseudonym) worked as a mind control trainer/programmer. Both she and her entire family were involved in the cult group until several years ago, when they finally broke free. She has been a consultant to an online survivors group that helps people dealing with issues related to cult programming and satanic ritual abuse. Svali, a writer and a registered nurse, has self-published a book on breaking free of cult programming, which several experts in the field have said has “invaluable information” for the survivor of ritual abuse. She is now married to her second husband and has two children.

In the interview, Svali states that all Illuminati children are heavily conditioned to be obedient, patient, self-controlled, and totally loyal to the “family”. Some are groomed for the military or politics; others are prepared for business – or even “businesses” such as prostitution. Marriages are arranged, one reason being to strengthen ties between different bloodlines. All the members of the families have respectable fronts as “normal” people to the degree that no-one who is not in the group would ever suspect the duality of their character and of their life. Meetings often occur at night. In these meetings children are “trained” using drugs, hypnosis, and shock-reward conditioning. They can, in Svali’s words, all handle and fire a weapon with deadly accuracy by the age of 8.

Below are few time codes, in case you are interested only in certain aspects, though the entire interview is worth seeing.