Former CIA Intelligence Officer: ‘Every single terrorist incident we have had in the US has been an FBI Pushed False Flag.’ 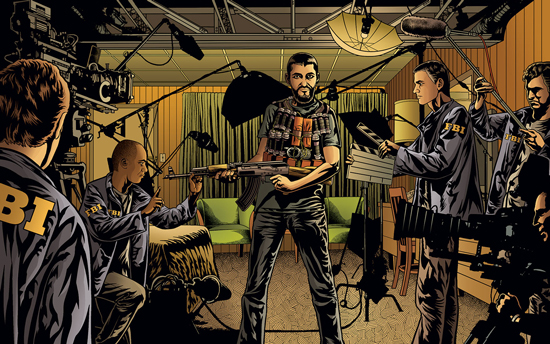 “Nearly every major post-9/11 terrorism-related prosecution has involved a sting operation, at the center of which is a government informant. The informants – who work for money or are seeking leniency on criminal charges of their own – assist in plots that are largely scripted by the FBI itself. Under the FBI’s guiding hand, the informants provide the weapons, suggest the targets and even initiate the inflammatory political rhetoric that later elevates the charges to the level of terrorism. Once they finally get the target to agree, the FBI swoops in at the last minute, arrests the target, issues a press release praising themselves for disrupting a dangerous attack. The target is sent to prison for years or decades.” – Glenn Greenwald, The Intercept, January 16, 2015

A little over two years ago, Samy Mohamed Hamzeh, 25, found himself in the midst of an FBI sting. Little did he know that he was being groomed for terrorism by the same government who claims to fight terrorism.
For four years, Hamzeh lived an entirely normal life, until one day, he was contacted by people who wanted to radicalize him and give him weapons. 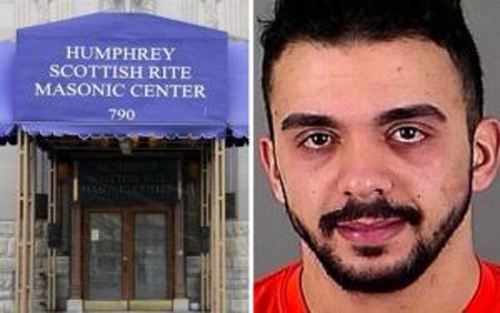 In February of 2016, the FBI announced they had foiled a terror plot by a man who was planning to kill at least 30 people to “defend Islam”. Americans cheered, and everyone felt safer – the FBI had saved us from extremists once again.
For months, two corrupt FBI informants goaded Hamzeh into obtaining weapons. According to his attorneys, hundreds of hours of recorded conversations show the FBI pressed Hamzeh into getting these weapons and eventually began pushing him to carry out a mass shooting at the Humphrey Scottish Rite Masonic Center. Hamzeh resisted.

In spite of the FBI claiming Hamzeh was going to carry out a mass shooting – they were attempting to force him to do – the recordings, according to his attorneys, show he resisted and adamantly refused to ever participate in violence.
Even after the FBI announced their foiled terror plot, they were unable to charge Hamzeh with anything other than possessing a machine gun and a silencer. And even these items had been essentially shoved into his lap by the FBI.

As the Journal-Sentinel reports, a psychiatrist who evaluated Hamzeh in jail concluded he does not fit a profile of someone who would kill strangers and “has a strong moral code with a very prominent conscience and empathy”.
“There is also no evidence that Hamzeh ever made any plans” reads the brief in support of the bond motion.

Hamzeh has now been in jail for a year and a half because the FBI tried to make him carry out a mass shooting that he didn’t want to do. And he could be there much longer as each of the charges for the weapons – that he also did not want – carry 10 years a piece. 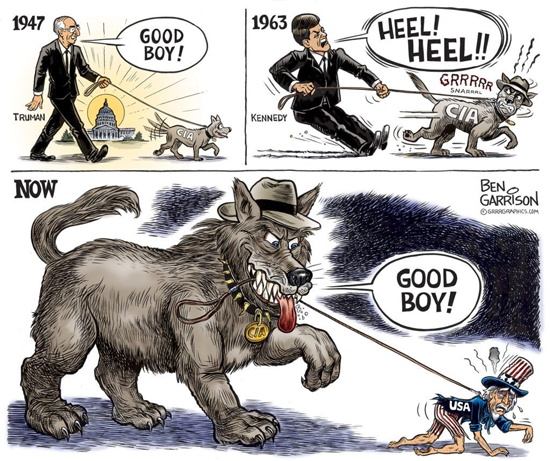 A former CIA intelligence officer tells about the abhorrent criminality made by the US government and US secret services also called The Deep State – fully matching Nazi Germany and the Stasi and KGB. Purpose: to create fear. The CIA is only allowed to work abroad – but has 10.000 locations in the USA. Even the weather services are bound by secrecy contracts – and it’s mortally dangerous to talk about the “wrong” things (previously called the truth), for the state has “secrecy privilege” and binds all its officials by secrecy contracts.

Chemtrails have the special interest of the very CIA boss. Whistleblowers are intimidated – and killed. Persecution is upon the families of whistleblowers. The US is collapsing due to tyranny of secrecy government. It is bound for destruction.

When the Danish Meteorological Institute was asked by an alternative media journalist what the longstanding clouds after aircraft consist of, there was silence for 5 minutes, while the meteorologists conferred on what to say. Answer: “We know what it is but have no public position on it!”
The Danish State TV’s chief meteorologist is co-author of volumes which clearly confirm solar radiation management (chemtrails).

Former FBI assistant director Thomas Fuentes actually defends the tactics used by the FBI to set up poverty-stricken men by offering them large sums of money and weapons to commit crimes.
He said: “If you’re submitting budget proposals for a law enforcement agency, for an intelligence agency, you’re not going to submit the proposal that ‘We won the war on terror and everything’s great’ cause the first thing that’s gonna happen is your budget’s gonna be cut in half.”

The FBI puts Americans in danger by grooming otherwise entirely innocent people into doing harm – so they can keep fear alive.
David Steele, a 20-year Marine Corps intelligence officer, the second-highest-ranking civilian in the U.S. Marine Corps Intelligence, and former CIA clandestine services case officer, said about these most unscrupulous operations: “Most terrorists are false flag terrorists, or are created by our own security services. In the United States, every single terrorist incident we have had has been a false flag, or has been an informant pushed on by the FBI. Indeed, we’ve become a lunatic asylum.”

Well, what on Earth is going on in the USA?

New York Times April 28, 2012 issue has the answer: “The United States has been narrowly saved from lethal terrorist plots in recent years – or so it has seemed. A would-be suicide bomber was intercepted on his way to the Capitol; a scheme to bomb synagogues and shoot Stinger missiles at military aircraft was developed by men in Newburgh, N.Y.; and a fanciful idea to fly explosive-laden model planes into the Pentagon and the Capitol was hatched in Massachusetts.

But all these dramas were facilitated by the F.B.I., whose undercover agents and informers posed as terrorists offering a dummy missile, fake C-4 explosives, a disarmed suicide vest and rudimentary training. Suspects naively played their parts until they were arrested.

When an Oregon college student, Mohamed Osman Mohamud, thought of using a car bomb to attack a festive Christmas-tree lighting ceremony in Portland, the F.B.I. provided a van loaded with six 55-gallon drums of ‘inert material’, harmless blasting caps, a detonator cord and a gallon of diesel fuel to make the van smell flammable. An undercover F.B.I. agent even did the driving, with Mr. Mohamud in the passenger seat. To trigger the bomb the student punched a number into a cellphone and got no boom, only a bust.” 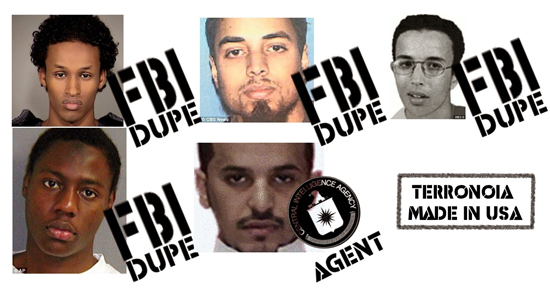 This is legal, but is it legitimate?
Carefully orchestrated sting operations usually hold up in court. Defendants invariably claim entrapment and almost always lose, because the law requires that they show no predisposition to commit the crime, even when induced by government agents.
The usual goal is not “to find somebody who’s already engaged in terrorism but find somebody who would jump at the opportunity if a real terrorist showed up in town.” Who is susceptible? Anyone who plays along with the agents, apparently.

This dishonest FBI false flag culture is usually told to the public (and politicians?) to be the merits of the FBI, and a reason for more FBI agents in a booming police state. NWO politicians benefit from this theatre by introducing censorship – especially on the internet – by calling any description of the truth, in particular about the biggest of such crimes, like 9/11 and the global warming lies, “conspiracy theories” and “fake news” to be punished with years of imprisonment.

Every larger terror action taking place since and including 9/11 were all found to be irrefutable false flags: 7/7 London bombs, Paris attacks, the Boston Marathon bombings in April of 2013, Nice, Orlando, Berlin and Brussels false flag attacks, and particularly Manchester and the London Bridge, as well as another 42 governmentally admitted false flags.

Former UK Prime Minister David Cameron pleaded to the UN to crack down on non-violent extremists “conspiracy theorists” telling the truth about 9/11 and the 7/7 bombs. Germany passed a law imposing heavy fines up on social media bringing the truth on false flags and Muslim terror. No wonder: “Our” Masonic politicians want to conceal their false flag crimes.

This intelligence service theatre is a prerequisite of the NWO dictatorship.