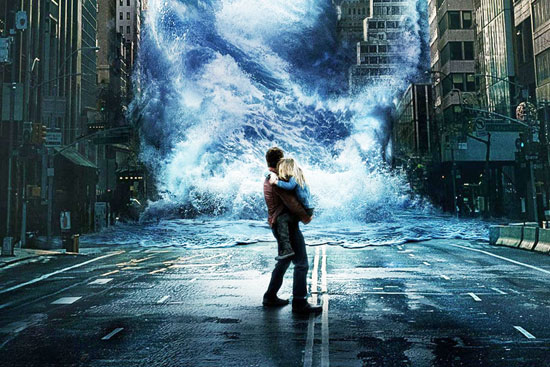 It’s hard to tell sometimes if art is imitating life, or vice versa. Add to that the fact that we live in a world heavily manipulated by a massive deep state apparatus with unlimited funding to experiment with the weaponization of any and all technology, and you may find yourself wondering if the big screen is trying to send you a wake up call.

Following in the footsteps of flicks like Independence Day and Armageddon, another apocalypse-themed, big-budget movie introduces the concept of weaponized weather to the general public. Geostorm, a Warner Brothers and Skydance production that opened to the theaters in October of 2017, pitched the classic hero-father against the technology of geoengineering and weather modification.

“After an unprecedented series of natural disasters threatened the planet, the world’s leaders came together to create an intricate network of satellites to control the global climate and keep everyone safe. But now, something has gone wrong – the system built to protect the Earth is attacking it, and it’s a race against the clock to uncover the real threat before a worldwide geostorm wipes out everything… and everyone along with it.”

The film appears to blend an assassination plot on the president with climate change hype, geoengineering technology, terrorism, mass murder and swashbuckling hero-violence.

In one trailer for the film, a Democratic U.S. President tells the world, “Thanks to a system of satellites, we can control our weather.”
“We built this system of satellites to stop natural disasters,” says another character.
“This wasn’t some malfunction,” says the leading lady, to which actor Gerard Butler replies, “Someone intentionally did this.”

The preview continues with the following dialogue, which pretty much sums up the current line of thought by independent researchers and analysts who’ve been working for years to expose these weather manipulation programs as technologies of control.

“We built this system of satellites to stop natural disasters. Someone is using it to create them.”

“There’s potential for catastrophic weather events on a global scale. A geostorm!”

“Someone has turned the system into a weapon.”

To build upon the theme of fictionalizing well-documented plans to control global population with all-powerful government programs, Geostorm even features heavily armed United Nations troops in blue helmets coming to the rescue of devastated civilian populations.

Media like this continues the work of normalizing government weather modification, presenting them as necessary evils in a time when human beings are in peril of being consumed by an angry planet. It’s man vs. nature of the highest order.

It’s all fun and games, of course, just entertainment, unless you pit this material against the ever-growing body of public evidence that weather control systems of this nature are already being developed and are in use in our world today. They are slowly being introduced to the public in the mainstream media, framed as survival tools.

Recently, physicist Dr. Michio Kaku acknowledges the plan to fire trillion watt lasers into the sky to control the weather.

The government is building a space fence around earth to encompass the planet in an array of satellites designed to manipulate the electromagnetic energy of the planet and surveil everything. Many have been speculating that devastating super storms Harvey, Irma and Jose were influenced by this type of technology.

General Electric was the first organization to pioneer weather modification in the 1940’s, successfully seeding a hurricane, changing its course, and causing major destruction to the east coast of the United States. Since then, the government has developed a broad array of technologies, including HAARP which is widely believed to use scalar technology to manipulate global weather.

The HAARP program was discussed in congress by David Walker, Deputy Assistant Secretary of the Air Force for Science, Technology and Engineering, who admitted to managing the ionosphere, “what the HAARP was really designed to do, to inject energy into the ionosphere to be able to actually control it.”

Walker’s testimony can be seen here:

Furthermore, there are numerous examples of predictive programming in Hollywood films and television programs, mostly foretelling events of a geopolitical/terrorism nature.

This is quite common in prime time cartoons for some reason, with numerous examples occurring in The Simpson’s and Family Guy, however the following clip from The Lone Gunman, which aired just 6 months prior to 9/11, is one of the most telling:

Films like iRobot and Minority Report, both written by renowned science fiction writers, introduce broader concepts like transhumanism and the technocracy into the hive mind, while movies like Gattaca and Oblivion introduce concepts of control and domination by untouchable overlords. The list goes on.

Depending on how you look at it, this film could not have been released at a better, or worse, time possible. After the hurricanes Harvey, Irma and Jose, after two massive earthquakes in Mexico, and in the midst of an increase in volcanic activity along the Pacific ring of fire, a movie about catastrophic weather might be too much.

Mind control is a very real feature of our modern world. It comes in many forms, and in the case of Hollywood and entertainment media, predictive programming aims to diffuse critical thinking and debate about an important issue, primarily by confusing facts with theory in an attempt delegitimize an idea as a ‘conspiracy theory,’ a loaded term.

The idea is to convince people that some issues are not to be taken seriously.

Here’s a look at another one of the theatrical trailers for Geostorm: