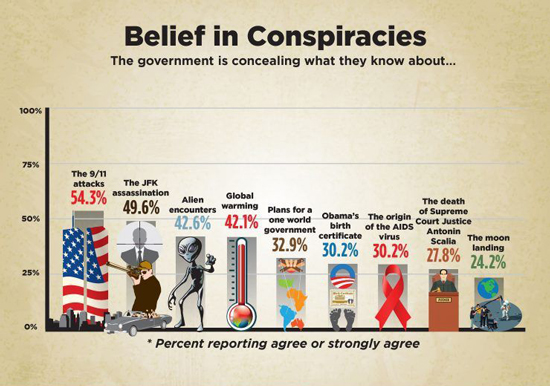 A majority of Americans believe that the government is concealing information about the 9/11 attacks, a recent survey suggests.

And that’s not the only conspiracy theory believed by a wide swath of Americans: around 40 percent believe the government is hiding information about aliens, the John F. Kennedy assassination and global warming. Conspiracy theories about the JFK assassination abound, and scientists say these ideas have become embedded in the very culture surrounding his death, with heaps of TV shows, books and movies on them.

“We found clear evidence that the United States is a strongly conspiratorial society”, study lead author Christopher Bader, a sociologist at Chapman University in California, said in a statement. “We see a degree of paranoia in the responses. Most indicative is nearly one-third of respondents believed the government is concealing information about ‘the North Dakota crash’ a theory we asked about that – to our knowledge – we made up.”

Exactly why so many Americans seem to hold the right mix of belief and paranoia required to buy into conspiracy theories isn’t quite clear, though the study did identify certain types of people who are more or less likely to hold such beliefs.

The findings are based on survey answers from 1,511 Americans ages 18 and over who took part in the National Survey of Fears – Wave 3. The surveys were weighted to provide demographically representative results based on the American population as a whole.

Results showed that a solid minority of people who not only believed in conspiracies involving the 9/11 attacks, but also held conspiracy theories about President Obama’s birth certificate and the origin of the AIDS virus. Nearly a fourth found something suspicious in the death of Supreme Court Justice Antonin Scalia.

Past research into the math behind conspiracy theories has found that the more people who are involved in keeping a plot secret, the higher the odds it will be unmasked eventually.

People who believe conspiracy theories tended to be more pessimistic, less trusting of people they know, and more likely to do things like buying a gun out of fear, the survey results indicated.

Based on the survey results, the person likeliest to have a conspiratorial mindset is a white, employed Republican with a lower income, who is affiliated with a Christian denomination but doesn’t attend religious services too often.

“Conspiracy theorists tend to be more pessimistic about the near future, fearful of government, less trusting of other people in their lives and more likely to engage in actions due to their fears, such as purchasing a gun” Bader said.

This suspicion of government and conspiracy theories does not correspond with skepticism about everything. For instance, more than two-thirds of Americans, regardless of conspiracy-theory attitudes, held some belief in the paranormal.