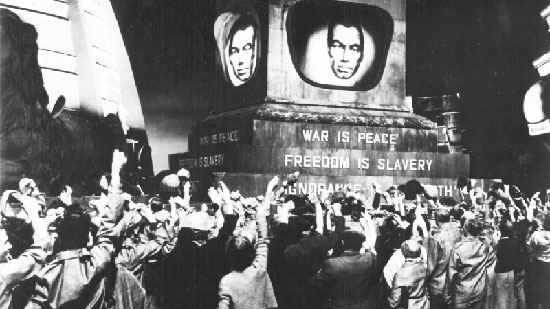 Many of the layers and subtleties in Orwell’s 1984, though fixed for the sake of fiction, so perfectly reflect the non-fictional world – the impulses of totalitarian institutions and the spirit of individuals – that it has become a near timeless representation. Arguably the most significant political fiction ever written, 1984 begins with the daily Two Minutes of Hate during the time period “in preparation for Hate Week”.

Orwell knew. Hatred is a control mechanism.
The more repressed a society, the more hateful all within must be. In order for oligarchical collectivism to take hold – in order for the few to benefit over the many without recognition or revolution – hatred must be infused. Hatred leads to the “us and them” mentality which drives clever reasoning to convince people to kill and be killed in the name of an institutional godhead. The more repressive and evil an institution, the more hatred they will drive and instill.

During World War II, from which much of 1984 is derived, hatred was used amongst all sides so as to enable the killing of others. During World War I, both sides believed they were fighting for liberty and freedom, and believed the others were evil to enable the killing of others.
Today hatred is used just as it was in 1984 to stagnate society and keep our minds closed. Hatred results in close-mindedness and being closed to our own power.

Buddha taught compassion and became an enlightened being by meditating on it. Compassion is the opposite of hate and has the opposite effect on our body, mind, spirit and surroundings. Hatred allows us all to be tricked into not seeing the brotherhood of man. Hatred allows institutions to promote war and killing. Hatred leads to closed mindedness and closes one off to healing spiritual energy.

There is no way to reap the reward of spiritual energy if you are closed off and have hatred within. There is no way to begin to heal yourself and surroundings if you hold hatred for any of God’s creatures on different paths. If you have hatred and are inspired by hatred, you have been convinced like some Outer Party shmuck in 1984 to serve institutional interests.

An important way to be open to energy, an important way to be open-minded, is to be completely open to compassion and forgiveness. That does not mean to accept foolishness or violence, but accept that every one of God’s creatures is on a path of ascension, and that we were all fools at least once – perhaps many times – and are capable of being fooled at any time.

The health benefits of water fasting