How to Use Brainwaves to Expand Your Consciousness

The human brain is a complex entity constantly at work, sending electrical signals, communicating, building new neural connections and so on. This electrical activity generated by the brain, also known as brainwaves, reflect our state of mind. Reality is not based on outside influences but is an internal process based on our thoughts, perception and emotions. If we deepen our understanding of these brainwave frequencies, we can control our reality. 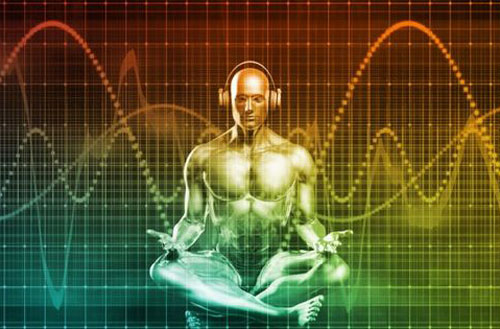 There are five different kinds of brainwaves – Beta, Alpha, Theta, Delta and Gamma.

It is completely a natural biological occurrence in every human being to experience these different states at various times in a day, and generally one state is dominant.

Did you know that each brainwave has its own set of characteristics representing a unique state of consciousness? Each brainwave state occurs in a specific frequency range measured in cycles per second (Hz).

Each type of brainwave played a critical role in our mental development during our childhood. And today, they play an important role in maintaining our health and vitality as adults. Let’s take a look at the different brain wave states and the associated benefits and experiences.

Beta brainwaves are the ones of our normal waking consciousness. It is associated with a heightened state of alertness, logical thinking, problem-solving ability, concentration, when the mind is actively engaged in mental activities. Like a person in active conversation, playing sports or making a presentation would be in a Beta state. But higher Beta levels also result into stress, anxiety and restlessness.

Most people spend their waking lives in a beta state, no wonder many people experience high stress levels in today’s world. At the same time beta is required for effective functioning in daily life. 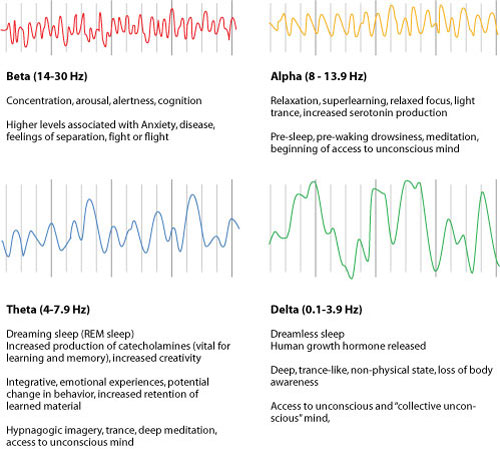 Brainwave frequency chart showing the different frequencies and its state of mind.

Alpha brainwaves are slower in frequency as compared to Beta, which translates to a highly relaxed state of awareness. It is a normal brainwave pattern in people who are naturally relaxed and creative. Like you are daydreaming, or even when you close the eyes and meditate, this frequency enhances your imagination, memory, concentration, creativity, reduces stress so you can focus on learning and performance.

Alpha brainwaves are considered the healthiest brainwave range and 10 Hz has widely been accepted as the “safest” brainwave frequency to train.

Theta brainwave occur during deep relaxation and meditation, light sleep or lucid dreaming including the REM dream state. It is the realm of your subconsciousness, where the mind is capable of profound insight, advanced intuition, healing, and oneness – in Theta state our minds can connect to the universe and manifest life-enhancing transformations. 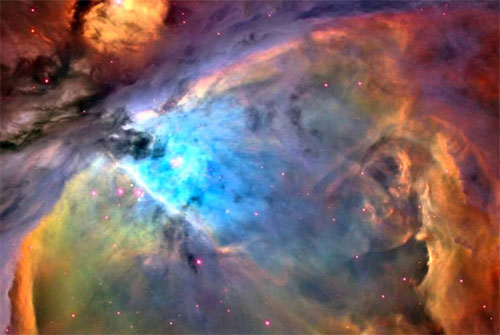 You can also experience vivid visualizations, great inspiration and profound creativity. The lower the brain frequency the faster the learning. Meditation and other yoga practices are credited as being so relaxing because they induce the mind in a trance like state where it starts generating theta waves. People tend to have paranormal, psychic experiences when their brain is full of theta brainwaves.

Most children and teenagers have dominant theta brainwave patterns.

Delta waves are the slowest in frequency but are the highest in amplitude. Observed in deep, dreamless sleep, this frequency is the gateway to the universal mind and the collective unconscious, where information received is otherwise unavailable at the conscious level.

Delta brainwave states have long been associated with healing, because deep sleep is necessary for regeneration and for your body’s self-healing mechanisms! Delta waves in meditation are said to help experienced practitioners access the unconscious mind. It is a dominant brainwave of infants (birth to 24 months) and even adults in deep sleep.

The Gamma brainwave is the fastest frequency at which the brain functions, where an individual can experience bursts of insight or high-level information processing. Experiments on Tibetan Buddhist monks have shown a correlation between transcendental mental states and gamma waves. When the monks were asked to generate feelings of compassion, their brain activity went into gamma frequency in a rhythmic, coherent manner. It is the state of being ‘in the Zone’, the feeling that you can do anything. 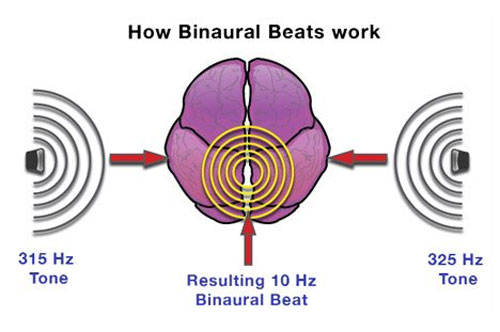 All of us experience these brainwave frequencies at different times every day, which take us to different levels of consciousness. Like when you are awake you are in a different brainwave state as compared to when you are sleeping. You can alter your brainwave pattern in order to reach a desired level of consciousness. For example if you can’t get sleep at night when you feel stressed, you can synchronize your brainwave into the frequency that corresponds to sleep using sound.

This technique of synchronizing your brainwave frequencies to an external audio stimuli is known as Brainwave Entrainment. As this process is continued for some time, the brainwave is tuned to the frequency of external sound and thus achieve the particular frequency level of that sound (alpha, theta or delta).

But you don’t need external stimulus if you can meditate. During meditation you reach a calm and relaxed state, this is the alpha state of consciousness. As the meditation deepens you find yourself being more calm and focused and the brainwave level reaches to theta (and finally to delta) state.

How can a sound with frequency lower than 20 Hz range be audible to the human ear? The answer lies in a specialized sound known as Binaural beats. What it did was simple – playing two different frequencies in each ear, the brain detects the difference between the two frequencies and tunes into the third “binaural beat”.

So if you play 400Hz into the right ear, and 410Hz into your left ear (using stereo headphones) your brain produces a third binaural beat pulsing at 10 Hz, which is the difference between the two tones. 10 Hz is also equal to the alpha frequency, which brings about light relaxation, meditation, and creative thinking.

Binaural Beats shall provide you some excellent results often instantly which will help you in many ways. 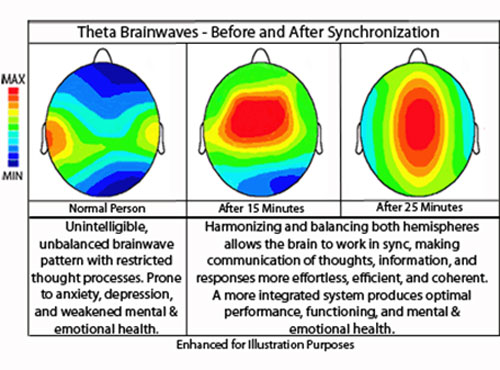 Theta is associated with extreme relaxation, sleep or drowsiness. Generally, one feels a sense of peace and calm when the brain kicks into theta gear.

Isochronic tones are switched on and off via predictable patterns, creating a pulse effect that is extremely effective when used for therapeutic reasons

Isochronic are even more intense than binaural beats and considered more effective. An isochronic tone is a single tone that turns on and off in a particular pattern. Each of the tones are distinct and are evenly spaced to be able to create a lasting impression on the brain.

Basically our brains have to do much less work to get the same effects as binaural beats – which allows us to feel more relaxed, get in a more powerful and peaceful meditative state and visualize better. It is recommended to use headphones. Many people who do not respond well to binaural beats often respond very well to isochronic tones.

However, for a permanent life-changing spiritual focus, it is best to use traditional meditation methods as your primary tools to access higher dimensions. As you know meditation can also make structural changes to the brain in powerful and positive ways and even in the people around you!