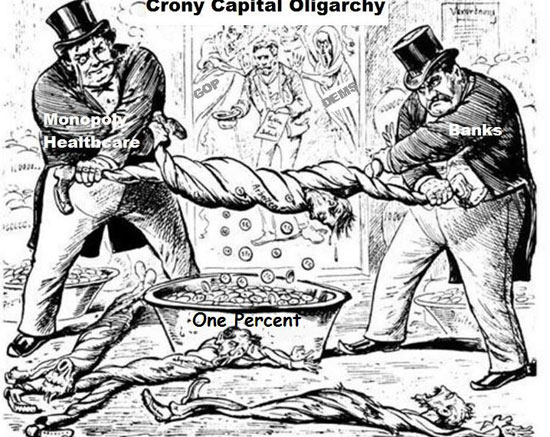 Introduction:
On a scale not seen since the ‘great’ world depression of the 1930’s, the US political system is experiencing sharp political attacks, divisions and power grabs. Executive firings, congressional investigations, demands for impeachment, witch hunts, threats of imprisonment for ‘contempt of Congress’ and naked power struggles have shredded the façade of political unity and consensus among competing powerful US oligarchs.

For the first time in US history, the incumbent elected president struggles on a daily basis to wield state power. The opposition-controlled state (National Public Radio) and corporate organs of mass propaganda are pitted against the presidential regime.

Factions of the military elite and business oligarchy face off in the domestic and international arena. The oligarchs debate and insult each other. They falsify charges, plot and deceive. Their political acolytes, who witness these momentous conflicts, are mute, dumb and blind to the real interests at stake.

The struggle between the Presidential oligarch and the Opposition oligarchs has profound consequences for their factions and for the American people. Wars and markets, pursued by sections of the Oligarchs, have led opposing sections to seek control over the means of political manipulation (media and threats of judicial action).

Intense political competition and open political debate have nothing to do with ‘democracy’ as it now exists in the United States. In fact, it is the absence of real democracy, which permits the oligarchs to engage in seriously. The marginalized, de-politicized electorate are incapable of taking advantage of the conflict to advance their own interests.

What the ‘Conflict’ is Not About

The ‘life and death’ inter-oligarchical fight is not about peace!

None of the factions of the oligarchy, engaged in this struggle, is aligned with democratic or independent governments. Neither side seeks to democratize the American electoral process or to dismantle the grotesque police state apparatus.

Neither side has any commitment to a ‘new deal’ for American workers and employees.

Neither is interested in policy changes needed to address the steady erosion of living standards or the unprecedented increase in ‘premature’ mortality among the working and rural classes.

Despite these similarities in their main focus of maintaining oligarchical power and policies against the interests of the larger population, there are deep divisions over the content and direction of the presidential regime and the permanent state apparatus.

What the Oligarchical Struggle is About

There are profound differences between the oligarch factions on the question of overseas wars and ‘interventions’.

The ‘opposition’ (Democratic Party and some Republican elite) pursues a continuation of their policy of global wars, especially aimed at confronting Russian and China, as well as regional wars in Asia and the Middle East. There is a stubborn refusal to modify military policies, despite the disastrous consequences domestically (economic decline and increased poverty) and internationally with massive ethnic cleansing, terrorism, forced migrations of war refugees to Europe, and famine and epidemics (such as cholera and starvation in Yemen). 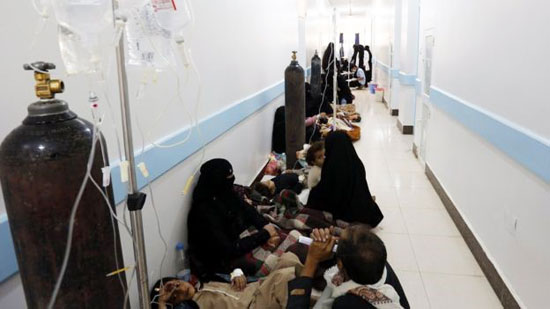 The Trump Presidency appears to favor increased military confrontation with Iran and North Korea and intervention in Syria, Venezuela and Yemen.

The ‘Opposition’ supports multilateral economic and trade agreements, (such as TTP and NAFTA), while Trump favors lucrative ‘bilateral’ economic agreements. Trump relies on trade and investment deals with Saudi Arabia and the Gulf Emirates and the formation of an aggressive military ‘axis’ (US – Saudi Arabia – Israel – Gulf Emirates) to eventually overthrow the nationalist regime in Iran and divide the country.

The ‘Opposition’ pursues wars and violent ‘regime change’ to replace disobedient ‘tyrants’ and nationalists and set up ‘client governments’, which will provide bases for the US military empire. Trump’s regime embraces existing dictators, who can invest in his domestic infrastructure agenda.

The ‘opposition’ seeks to maximize the role of Washington’s global military power. President Trump focuses on expanding the US role in the global market.

While both oligarchical factions support US imperialism, they differ in terms of its nature and means.

For the ‘opposition’, every country, large or small, can be a target for military conquest. Trump tends to favor the expansion of lucrative overseas markets, in addition to projecting US military dominance.

The competition among oligarchs does not preclude similarities in means and tactics. Both factions favor increased military spending, support for the Saudi war on Yemen and intervention in Venezuela. They support trade with China and international sanctions against Russia and Iran. They both display slavish deference to the State of Israel and favor the appointment of openly Zionist agents throughout the political, economic and intelligence apparatus.

These similarities are, however, subject to tactical political propaganda skirmishes. The ‘Opposition’ denounces any deviation in policy toward Russia as ‘treason’, while Trump accuses the ‘Opposition’ of having sacrificed American workers through NAFTA.

Whatever the tactical nuances and similarities, the savage inter-oligarchic struggle is far from a theatrical exercise. Whatever the real and feigned similarities and differences, the oligarchs’ struggle for imperial and domestic power has profound consequence for the political and constitutional order.

The ongoing fight between the Trump Administration and the ‘Opposition’ is not the typical skirmish over pieces of legislation or decisions. It is not over control of the nation’s public wealth. The conflict revolves around control of the regime and the exercise of state power.

The opposition has a formidable array of forces, including the national intelligence apparatus (NSA, Homeland Security, FBI, CIA, etc.) and a substantial sector of the Pentagon and defense industry. Moreover, the opposition has created new power centers for ousting President Trump, including the judiciary. This is best seen in the appointment of former FBI Chief Robert Mueller as ‘Special Investigator’ and key members of the Attorney General’s Office, including Deputy Attorney General Rob Rosenstein.

It was Rosenstein who appointed Mueller, after the Attorney General ‘Jeff’ Session (a Trump ally) was ‘forced’ to recluse himself for having ‘met’ with Russian diplomats in the course of fulfilling his former Congressional duties as a senior member of the Senate Foreign Relations Committee. This ‘recusal’ took significant discretionary power away from Trump’s most important ally within the Judiciary.

The opposition dominates the principal organs of propaganda. The press (Washington Post, Financial Times, New York Times and Wall Street Journal), television and radio (ABC, NBC, CBS and PBS/ NPR), which breathlessly magnify and prosecute the President and his allies for an ever-expanding web of unsubstantiated ‘crimes and misdemeanors’.

Neo-conservative and liberal think tanks and foundations, academic experts and commentators have all joined the ‘hysteria chorus’ and feeding frenzy to oust the President.

The President has an increasingly fragile base of support in his Cabinet, family and closest advisers. He has a minority of supporters in the legislature and possibly in the Supreme Court, despite nominal majorities for the Republican Party.

The President has the passive support of his voters, but they have demonstrated little ability to mobilize in the streets. The electorate has been marginalized.

Outside of politics (the ‘Swamp’ as Trump termed Washington, DC) the President’s trade, investment, taxation and deregulation policies are backed by the majority of investors, who have benefited from the rising stock market. However, ‘money’ does not appear to influence the parallel state.

The divergence between Trump’s supporters in the investment community and the political power of the opposition state is one of the most extraordinary changes of our century.

Given the President’s domestic weakness and the imminent threat of a coup d’état, he has turned to securing ‘deals’ with overseas allies, including billion-dollar trade and investment agreements.

The multi-billion arms sales to Saudi Arabia and the Gulf Emirates will delight the military-industrial complex and its hundreds of thousands of workers.

Political and diplomatic ‘kowtowing’ to Israeli Prime Minister Netanyahu should please some American Zionists. But the meetings with the EU in Brussels and with the G7 in Siciliy failed to neutralize Trump’s overseas opposition.

NATO’s European members did not accept Trump’s demands that they increase their contribution to the alliance and they condemned his reluctance to offer unconditional US military support for new NATO members. They showed no sympathy for domestic problems.

In brief, the President’s overseas supporters, meetings and agreements will have little impact on the domestic correlation of forces.

Moreover, there are long-standing ties among the various state apparatuses and spy agencies in the EU and the US, which strengthen the reach of the opposition in their attacks on Trump.

While substantive issues divide the Presidential and Opposition oligarchs, these issues are vertical, not horizontal, cleavages – a question of ‘their’ wars or ‘ours’.

Trump intensified the ideological war with North Korea and Iran; promised to increase ground troops in Afghanistan and Syria; boosted military and advisory support for the Saudi invasion of Yemen; and increased US backing for violent demonstrations and mob attacks in Venezuela. 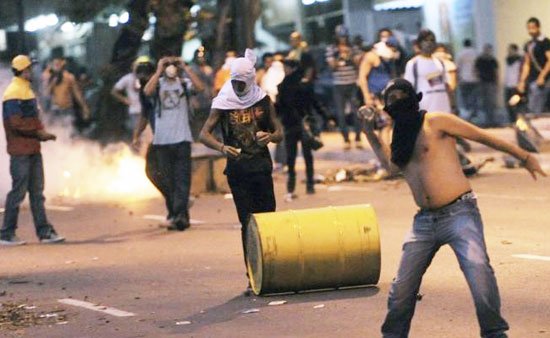 Protest against the Maduro government in Venezuela

The opposition demands more provocations against Russia and its allies; and the continuation of former President Obama’s seven wars.

While both sets of oligarchs support the ongoing wars, the major difference is over who is managing the wars and who can be held responsible for the consequences.
Both conflicting oligarchs are divided over who controls the state apparatus since their power depends on which side directs the spies and generates the fake news.
Currently, both sets of oligarchs wash each other’s ‘dirty linen’ in public, while covering up for their collective illicit practices at home and abroad.

The Trump’s oligarchs want to maximize economic deals through ‘uncritical’ support for known tyrants; the opposition ‘critically’ supports tyrants in exchange for access to US military bases and military support for ‘interventions’.

The battle of the oligarchs has yet to reach a decisive climax. President Trump is still the President of the United States. The Opposition forges ahead with its investigations and lurid media exposés.

The propaganda war is continuous. One day the opposition media focuses on a deported student immigrant and the next day the President features new jobs for American military industries.

Oligarchs of all stripes and colors are grabbing for total state power and wealth while the majority of citizens are labeled ‘losers’ by Trump or ‘deplorables’ by Madame Clinton.

After the blood-letting, when and if President Trump is overthrown, the State Security functionaries in their tidy dark suits will return to their nice offices to preside over their ‘normal’ tasks of spying on the citizens and launching clandestine operations abroad.

The media will blow out some charming tid-bits and ‘words of truth’ from the new occupant of the ‘Oval Office’.

The academic left will churn out some criticism against the newest ‘oligarch-in-chief’ or crow about how their heroic ‘resistance’ averted a national catastrophe.

Trump, the ex-President and his oligarch son-in-law Jared Kushner will sign new real estate deals. The Saudis will receive the hundreds of billions of dollars of US arms to re-supply ISIS or its successors and to rust in the ‘vast and howling’ wilderness of US-Middle East intervention. Israel will demand even more frequent servicing’ from the new US President.

The triumphant editorialists will claim that ‘our’ unique political system, despite the ‘recent turmoil’, has proven that democracy succeeds, only the people suffer!
Long live the Oligarchs!