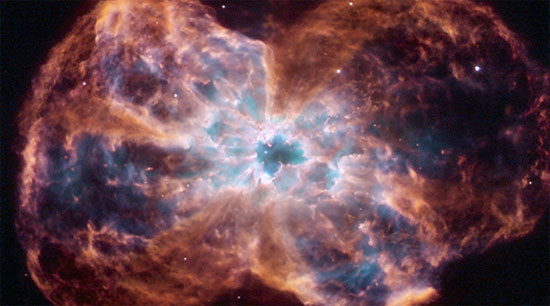 “Substantial evidence” has been found that everything we see and feel may in fact be part of a vast illusion, according to a new study from a group of theoretical physicists and astrophysicists.

Writing in the journal Physical Review Letters, scientists in Canada, Italy and the UK came to the conclusion while studying irregularities in the cosmic microwave background (CMB) – the so-called “afterglow” of the Big Bang.

The theory of a holographic universe was first put forward in the science world in the 1990s and argues that everything that makes up our 3D reality, from massive stars to tiny atoms, is actually all set in a 2D plain.

This model also theorizes that gravity comes from thin, vibrating strings which are actually holograms generated in a flatter universe which create the illusion of having 3D depth.

The new study examined huge volumes of data collected by advanced telescopes and sensing equipment to study the “white noise” of the CMB and seek out irregularities.

The team claims that this model could help iron out some of the inconsistencies between Einstein’s theory of gravity and quantum physics, which could be explained if the universe was a hologram.

Study co-author Professor Kostas Skenderis from the University of Southampton compares the theory to that of watching a 3D movie, Phys.Org reports. The audience perceives that the images have height, width and depth when in reality they are mere projections from a 2D screen.

“We are proposing using this holographic universe, which is a very different model of the Big Bang than the popularly accepted one that relies on gravity and inflation” said the study’s lead author Niayesh Afshordi, professor of physics and astronomy at the University of Waterloo, Canada.

“Each of these models makes distinct predictions that we can test as we refine our data and improve our theoretical understanding – all within the next five years.”