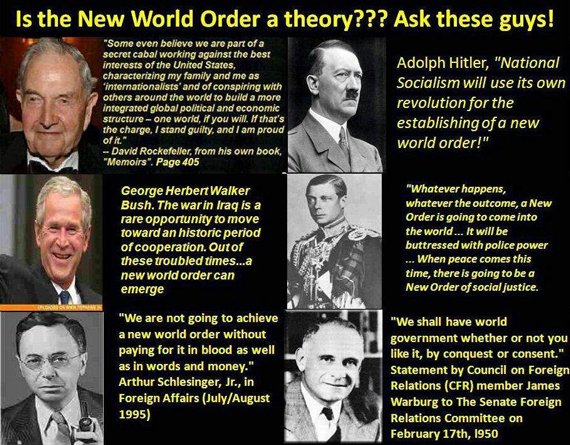 Nothing is what it looks like in the development of the New World Order – a concept in use for a century now. In its ideology, however, it is 241 years old, born on May 1, 1776. It has been generating a swarm of revolutions, false flags, as well as two world wars so far – and a third, much more devastating war having been prophesied by the sinister forces behind the NWO. In fact WW3 is already ongoing.

The Illuminati of the London City had no difficulty in launching WW1 after Emperor Wilhelm supported the foolish Austrian declaration of war on Russia in 1914. Only Rothschild wanted WW1. As they did not invite defeated Germany to the Versailles Peace Treaty, Rothschild could easily let his agent, and founder of the FED and the Council on Foreign Relations, Edward Mandell-House, write that treaty in a way that also WW2 was inevitable (and planned to submit Germany permanently to the London City). It was more complicated to start and manage WW2 – which succeeded by means of Rothschild agent Adolf Hitler – a British Tavistock brainwashed agent cooperating with the Zionists to drive them to Palestine. More on Hitler’s origin below.

The Question is: How will these criminals start and manage WW3?
To promote their NWO out of Chaos, the ruthless Illuminati henchmen behind this satanic order, headquartered in the London Dragon City use the Hegelian dialectics:
1. Create a problem (thesis);
2. Remove the problem by means of a solution (antithesis);
3. The synthesis thereby achieved is to be a new thesis etc.

To make this wheel running, the Illuminati and their Masonic henchmen create “saviours” and let mankind believe that such “saviours” (antitheses) can eliminate the thesis of rampant New World order.

One can also see it as a “Messianic”/“demonic” religious War between Lucifer’s (god of Pharisaism/Zionism/Masonry – John 8:44) Kindergarten politicians/ideologists for the synthesis of their satanic one world state out of Chaos (which they first create).

Rabbi Marvin S. Antelman is Chief Justice of The Supreme Rabbinic Court of America and the U.S. coordinator of the Jewish Survival Legion.
He is an internationally recognized organic chemist and biochemist. He is one of today’s leading experts on Jewish Law (Halakhah). The Supreme Rabbinic Court (the American predecessor and branch of the Sanhedrin Qitanah) has dealt with many “unpopular” questions such as the excommunication of Henry Kissinger, Rabin and Peres.
Rabbi Antelman tells that Hitler’s father was a Rothschild through a Frankist satanic ritual.
The Jewish Illuminati bankers financed Hitler.

The Truth about Adolf Hitler and Rothschild

In the Forbidden Knowledge, Barry Chamish thoroughly writes on Antelman’s books To Eliminate the Opiate volumes I and II: “We all owe a huge debt to Rabbi Marvin Antelman, the first Jew to try to decipher the real conspiracy to destroy Jews and Judaism, which, as we all know is in full swing today.

Way back in 1974, before any of us had heard of the Illuminati or the Council on Foreign Relations (CFR), Rabbi Antelman published his book To Eliminate the Opiate and exposed their covert war against religion, focusing on their battle plan to extinguish Judaism, but with great implications for Christianity as well.
It has drawn praise for its deep scholarship even from researchers who clearly have no great love for Jews.

One disputed subject are The Protocols Of The Wise Elders Of Zion – a paper which explains the most disgusting plans of the Satanists Kabbalist Zionists for the world. The Zionists have tried to stamp them as forgeries – but they have never been proven as such. On the contrary, these plans are daily coming true before our very eyes.

Rabbi Antelman says that Illuminati such as Rothschild, Rockefeller, Warburg, and some radicals are the authors. (Antelman’s To Eliminate the Opiate I, Introduction, p. xviii).
He points out messianic Satanist Shabbetai Tzvi and Jacob Frank as the big traitors to Judaism – and adds: ‘Sabbatian cults are well documented in the Encyclopedia Judaica and in the writings of distinguished Israeli academics including the late Professor Y. Tishbi, Yehuda Liebes and Yaacov Katz. In a nutshell, these groups practised incest, adultery and homosexuality. They conspired with the Illuminati with goals of destroying all religions and fusing all nations into one’ (pp 256).
‘Gershon Scholem has traced the incestuous practises of the Sabbatians to that of Earth Mother worship’ (pp 123).

With New Age charitable trusts such as the Youngwood Institute, one finds disgust of the Jewish and Christian groups that have to be exterminated. Accordingly, in the next ‘burnt offering’ being planned, religious Jews and so-called fundamental Christians are at the top of the list.

According to Rabbi Antelman’s chronology, in the 1770s Jacob Frank made a pact with one Adam Weishaupt, a Jewish-born Jesuit, to enlist his Sabbatians to join Weishaupt’s (and Mayer Amschel Rothschild’s) Illuminati. During the French Revolution, documents were discovered which exposed the Illuminati’s plan to destroy the foundations of European civilization; family, religion, royalty and morality, through revolutions. Weishaupt’s organization was formally banned throughout Europe, so a decision was made to infiltrate the relatively benign Freemasonry (Wilhelmsbad 1781) and instill Illuminism from within. The plan worked.”

According to Rabbi Marvin Antelman’s To eliminate the Opiate II, Adolf Hitler was ritually conceived at a Tisha B’Av at the same house (Rothschild, Vienna), where his grandmother, Maria Anna Schicklgruber, was servant and got pregnant. The Rabbi did not name the father, but called him Abraham, a rich Hungarian Jew. The title of Abraham does not have to be a proper name, but can also be taken as a reference to belonging to the Noahite elitist caste. Antelman heard this testimony given under oath in an American court. It was said Hitler has been ritually conceived with the determination of a reborn Nimrod. 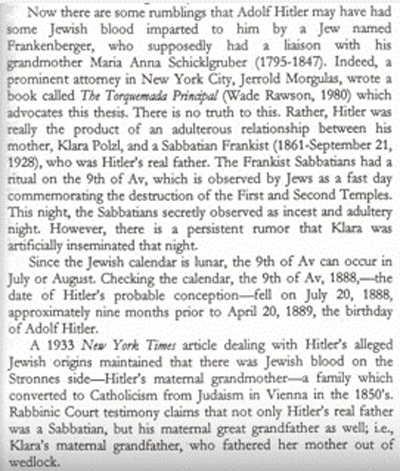 From Rabbi Marvin Antelman book To eliminate the Opiate II.

The 9 Av corresponds to the 19.7 in the sun calendar, in antiquity the day of the first flashing of Sirius on the horizon and the beginning of the dog days.
Hitler’s mother was supposed to have died a year later, officially of cancer, and she never told her son who his father really was. After her death, Hitler actually lived with his father Baron de Rothschild in Vienna.

The German corporate bosses (and Heinrich Himmler) knew exactly who Adolf Hitler really was and therefore cooperated with him and supported him. If he had actually been a penniless ex-registrar, they would arrogantly have overlooked this “nobody”, and the Nazi Party would have remained completely unsuccessful.

In his work Rome and Jerusalem, the Last Nationality Question of 1858, Marx’ friend Moses Hess explains the race struggle, not the class struggle, as the factor that should shape the face of Europe. In 1862 he formulated National Socialism conceptually as a binding state ideology for the Zionist projected racial Jewish state Eretz Yizrael.
To this end, Syria is currently being cleansed up to the Euphrates in fulfilment of Abrahamic prophecy.

Hitler, as his mentor Leo Baeck, was subjected a thorough Tavistock brainwashing in a monarch-precursor program. His Rothschild liaison was Moses Pinkeles aka Trebitsch Lincoln, alias Ernst Franz Sedgwick Hanfstaengl, alias “Putzi”. This close friend of Leon Trotsky and Roosevelt’s former study commissary was supposed to have been a Hungarian Kabbalist Jew who was trained with extraordinary mind control and manipulative abilities and who, besides Hitler’s Mein Kampf and the NSDAP party organ of the Volkischer Beobachter, helped to finance Trotsky’s Red Army.

This is the recipe of Illuminati bankers to create a world war:
1. Steal the money of the peoples (central bank debt + interest and clever bankers using fraudulent methods such as stock market crash, financial crises);
2. Bribe the elected politicians with this money;
3. Build up extra-parliamentary secret organizations (CFR, TLC, Bilderberg, Club of Rome UN, etc.) and fill them with politicians, media people, and officials to give them a sense of meaning, even though they are only errand boys;
4. Assign different roles to these people (thesis, antithesis);

5. Promote these people with money and threats to drive their policies in the direction of the given roles – impose an Illuminati constitution on them (USA – Germany – Grundgesetz). Chain of command: London City – Masonic Superlodges – Masonic lodges – politicians – media / officials;
6. At the planned time, build an enemy image for the populace brainwashed by the media and educational institutions (the east and the west on each other) and false flags;
7. Add an ideological / religious dimension to the enmity by agitation;
8. Let the peoples choose their groomed, manipulable charismatic Tavistock-brainwashed “Saviour”/Freemason leader / president in East and West.
(Stalin as well as Franklin D. Roosevelt and Churchill were high-degree Masons – like Hitler (Thule-Lodge) too).
9. Order a giant and triggering false flag to make the confrontation unavoidable.
If something goes wrong: trigger chaos / civil war, because the end goal is the demolition of the old order to build the new on the ruins – with reduced slaves population.
Goal: all power for the Illuminati.

Your Hair Can Reveal A Lot About Your Health