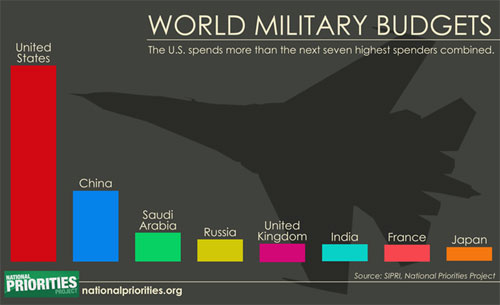 Military spending is the biggest waste of federal tax dollars ever. Both political parties are equally complicit.

The militarism scam is the best-kept secret in American politics.

When you think about it – but no one in the halls of Congress ever does – it’s hard to think of a country that has less to fear than the United States. Two vast oceans eliminate US vulnerability to attack, except by countries with sophisticated long-range ballistic missiles (5 out of 206 nations). US share long borders with two nations that are close allies and trading partners.

Historically, the U.S. has only faced an invasion once, by the British during the War of 1812. (There have been other minor incursions, by Mexico during the XIX century and the Japanese occupation of two remote islands in the Aleutian chain during World War II. The Pearl Harbor attack was a raid, not an invasion.)

Objectively, Americans have little to worry about beside terrorism – and that’s a job for domestic police and intelligence agencies, not the military. Yet a whopping 54% of discretionary federal spending goes to the Pentagon. The Bush Administration put the Afghanistan and Iraq wars off the books of the Pentagon budget. And that’s not counting interest on debt or benefits paid out for old wars. US is still paying $5 billion a year for World War II. They’re still paying off beneficiaries for the Civil and Spanish-American Wars!

The US accounts for less than 5% of the world’s population. US accounts for 37% of military spending worldwide, equal to the next seven countries (China, Saudi Arabia, Russia, the United Kingdom, India, France, Japan) combined. (And the U.S. sells a lot of hardware to most of those countries.)

Russia spends roughly a tenth as much on defense as the US. And they have a lot more (and twice as much territory) to defend against: NATO/American missiles to their west in Europe, a southern border full of radical Islamists in unstable countries like Kyrgyzstan and Uzbekistan, Afghanistan a stone’s throw away, historical regional superpower rival China next door.

Despite its relatively small defense budget, Russia somehow manages to soldier on.

No matter how you look at it, America’s military budget is due for a haircut. It should scale quickly down to the Russian level, pro rata for square mileage – lob 95% of this bloated $600 billion a year monstrosity right off the top.

But even a less radical budget cutter could do some good. A 10% cut, $60 billion a year, would buy universal pre-school or allow half of America’s four-year college and university students to have free tuition.

Insanely, US is going the opposite direction.

Republican hypocrisy is brazen and obvious. Most are channeling Dick Cheney’s “deficits don’t matterˮ to justify huge tax cuts to rich individuals and big business. “I’m not the first to observe that a Republican Congress only cares about the deficit when a Democrat is in the White House,ˮ the economist Alan Krueger says.

But even the most strident deficit hawks, though uncomfortable with the tax cuts, have no problem whatsoever with Trump’s proposed hike in military spending.

“Any time we spend more money – even if it’s for something that we need – we need to cut spending in a corresponding aspect to the budget,ˮ says Rand Paul. Slashing other, more needed programs – which is pretty much anything other than the military – is what passes for sanity in the Republican Party.

No one is proposing zero increase, much less a cut.

If anything, the Democrats are even worse. Democrats have promised a fierce Resistance to Trump and his works. But their oft-stated resolve is noticeably absent when it comes to He-Who-Must-Be-Impeached’s lust to jack up a crazy-ass defense budget that doesn’t have much of a justification to exist at all.

“This budget shifts the burden off of the wealthy and special interests and puts it squarely on the backs of the middle class and those struggling to get there. Democrats in Congress will emphatically oppose these cuts and urge our Republican colleagues to reject them as well,ˮ Senate Minority Leader Chuck Schumer said.

Notice what’s missing? Like other Democratic leaders, Schumer’s beef is with Trump’s proposed cuts to the arts, EPA and other domestic spending, and the tax cuts. He doesn’t say boo about the defense increase.

As usual, Bernie Sanders was better than other Democrats. But even he didn’t explicitly reject the idea of a military increase on its face.

As americans move past Memorial Day – the holiday when they remember the war dead, the vast majority who died not to defend America but to oppress people in other countries who never posed a threat to the United States – americans should reconsider the assumption that all military spending is good spending.