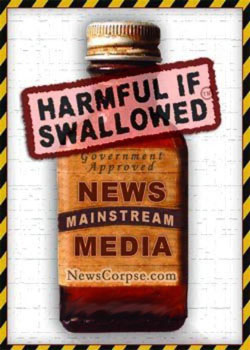 “Every major organ of the Mainstream Media has quite willingly participated in the ongoing cover-up of the Crime of the Millennium – the 9/11 false flag terror attacks in New York City and Washington.”

To many it is now quite obvious that the mainstream media (MSM) is a real enemy of “We the People”. Stated more accurately, it is the owners of the MSM who are the real enemies of the American Republic. Actually, it is those clandestine powers who control the MSM owners, via multiple control mechanisms, who are the true enemies of the American people… as well as the world community of nations.

Indisputable Fact: Until this harsh reality is dealt with decisively and firmly, there can be no real change throughout the planetary civilization.

The next logical step in this critical research project is to ask: Why is the 9/11 cover-up so important?

The highly coordinated cover-up of the U.S. government-directed terror attacks on 9/11 is quite representative of all the major cover-ups throughout modern American history. The true perpetrators utilized the same modus operandi as they did to cover-up the assassination of John Kennedy, the Oklahoma City Bombing, the Sandy Hook School “massacre” etc. Hence, when one understands how they can successfully cover-up such a massive crime as 9/11, it is then easier to see why they routinely employ the same basic game plan whenever they so choose.

For anyone who has conducted even a modicum of research into the 9/11 black operation, it quickly becomes clear that not only did the U.S. Federal Government coordinate the biggest cover-up in American history, they could only have done so with the full knowledge and support of every major news platform within the MSM.

Point of Fact: Without the intimate involvement of the MSM, the 9/11 cover-up could not have succeeded.

In light of the [ongoing] 9/11 cover-up, it can be stated with absolute certainty that the MSM is guilty of the cover-up of state-sponsored terrorism (by the US government), various crimes against humanity, the countless war crimes of the post 9/11 wars, and high treason of the highest order.

Where it concerns the 9/11 false flag operation, the degree of treachery demonstrated by the MSM against the American people is unprecedented in its depth and breadth. Their profound betrayal of the U.S. citizenry through the implementation of the MSM cover-up is both shocking for its sheer audacity as it is stunning for its naked malevolence.

What is crucial to understand here is that where the original crime was carried out over 15 years ago, the enormous cover-up continues up to this very day. Therefore, the duration and severity and number of the myriad MSM cover-up crimes grows by the day. As matter of fact, the unprovoked wars of aggression prosecuted by the Obama Administration in the Mideast and elsewhere have only occurred only because of the success of the MSM 9/11 cover-up.

In view of this irrefutable state of affairs, it can be asserted that those who populate the highest echelons of the entire corporate media are traitors and turncoats. Who they really serve can only be surmised, but their loyalties do not lie with the American Republic. Because the continuing 9/11 cover-up requires so much day-to-day dissemination of known falsehoods and fabricated lies, those who staff the major organs of the MSM at even the lower levels are likewise guilty of treason.

There is only one realistic solution to this ever-worsening predicament 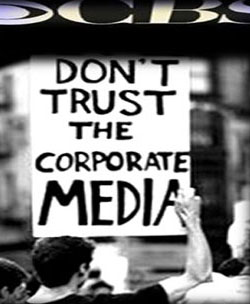 The mainstream media in its current form must be shut down and removed from American civil society. Or, it must be completely taken over by a newly constituted U.S. Federal Government that truly serves the interests of the American people, as well as the world-at-large.

Any endeavor that is undertaken that does not include one of these two execution plans is essentially worthless. That’s because there can be no meaningful dissemination of the truth, or reconciliation throughout the nation, until the power of the press is fully restored to the people themselves. Absent this successful initiative, there can be no justice, nor will there be any peace, in US or abroad. The influence of the American MSM is far too great worldwide and therefore needs to be radically transformed into a force for good.

Exactly how the new media platforms are constructed remains to be determined. Nevertheless, the country has seen everything about how NOT to run a media operation, so building a new enterprise based on truth, and run with integrity, ought to be fairly straightforward. It’s simply called: “Tell the Truth – Always!”

The current corporate MSM must be shut down and taken over. The sooner the better, as no meaningful change can take place as long as it continues to operate against the interests of the American people.

Those individuals who own and operate, direct and oversee the major corporate media companies need to be arrested post haste for treason and other serious crimes. They should be imprisoned without bail until their trials by jury can be conducted by a special 9/11 Truth and Reconciliation Commission. Within this legal framework and judicial format, they ought to be prosecuted to the fullest extent of the law.

Many media analysts and political commentators in the alternative media have suggested that those who are found guilty – of both the 9/11 crimes and cover-up – must be given the harshest punishments possible to serve as a powerful deterrent to all future traitors to the American Republic.