“And the truth is we don’t really want such unstable questions answered. We simply cannot tolerate to have our world, our leaders, our foundations so questioned. We prefer stasis to growth, security to true knowledge, blind faith to chaotic sticky self-defined wonder.” – Mark Morford, SF Gate Columnist 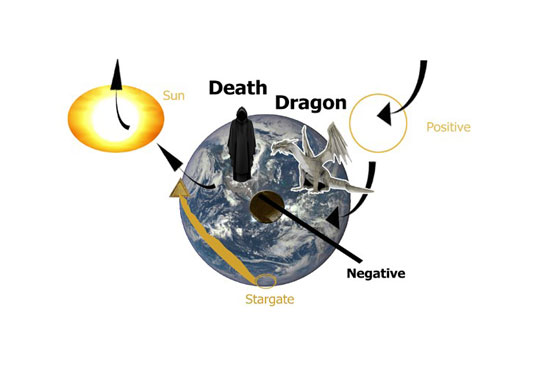 I am asking the National Security Agency to help stop soul erasure forever. We deserve to be here. This is the completion of my ongoing investigation using revoking agreements, including what I have uncovered as I have gone along my path. This investigation took a long time, and I have spent years doing this to get this far. When Veterans Today had completely uncovered everything about the War on Terror being a fraud, the Kosher Nostra, the Dictator by Tweet, possible underage sex-blackmail of prominent politicians 9/11 as a gateway to corporate colonialism and subjugation – a virtual police state to possibly set up a shift in power East and the fraudulent 2016 election, I saw an image of brown earth, and I wanted to fight back for all of us. Though it was unconventional it was necessary to even take on the Secret Societies, who believed in “Original Sin”. I had to understand why it is fine to continue allowing the corruption to continue to destroy nature and all humanity. Why is it fine to poison our environment and our people? Why is it fine to destroy the Earth? I began revoking agreements at a fastidious pace working day and night to understand the information I was getting.

No matter what religion you believe in, I am adding information for you to consider as it may become more real as we go along. I am also not trying to upset people. I want to share what I have uncovered that correlates with real/natural space phenomenon. It is our path to Source with God in middle of the planet at the end of the line. I am going to tell it straight from what I understand and feel free to do your own investigation through revoking agreements. It takes time to change old belief systems into what is based on real phenomenon. So many books have been written to deceive us. They have wanted to keep us on a prison planet. We deserve to be free and sovereign here. We deserve to save the planet and nature.

Through revoking agreements, I was able to discover the secrets of the life-death-life cycle and discover what was missing here on Earth, as well as contracts that had been made against humans. From what I have learned, God, Death and the Dragon energy were not able to be on the planet due to a negative agenda for soul erasure involving the overlord of our planet and galactic malefic aliens that were contracted to take our planet over for its resources, humans included. God was only found in Nature, previously. Certain surface individuals had also moved a giant mass of magnetic material, to allow for malefic demons to live on the surface and torment people, this includes satanic cults.

The real true life-death-cycle involves the following phenomena: the Negative belongs in the Earth’s core and must be positioned correctly. This controls the natural spiritual energy on the planet and is connected directly to God/Infinite Source/Nature. This also eliminates the malefic spiritual energies on the planet and advances us to a peaceful, love based world again after what was potentially thousands of years of imprisonment.

The real war agenda was started by one white alien and her negative (a negative in relationship terms means a person’s soul mate). They made a contract to strip the solar system of life for raw materials, Earth is the last planet of raw materials including oil and humans, potentially to eat some of us. I suspect they have done that with the whole galaxy. Each planet in our solar system has had this happen to them. That is why they are all out of alignment. When you start revoking agreements, you start slowly with contracts that have been made against you by the controllers of the galactic core. I have been working on this since at least 2014. The moment I was able to get past the overlord and revoke negative agreements with the Galactic core, which brings in the Ananuki. I managed to get past the Universal Core, revoking negative agreements brings in the white dog men like good beings, the Source Core, which brings in a very good wind like energy and connect directly to Source and God in the middle.

I worked with negative energy on the planet to understand what was happening with these demons, including the Devil and Satan which are actually a real phenomenon. It was really creepy stuff and counter to God. God is love and light no matter what and the negatives quickly disappeared when I took the right steps.

Below you will find a diagram of the real connections as I understand them. 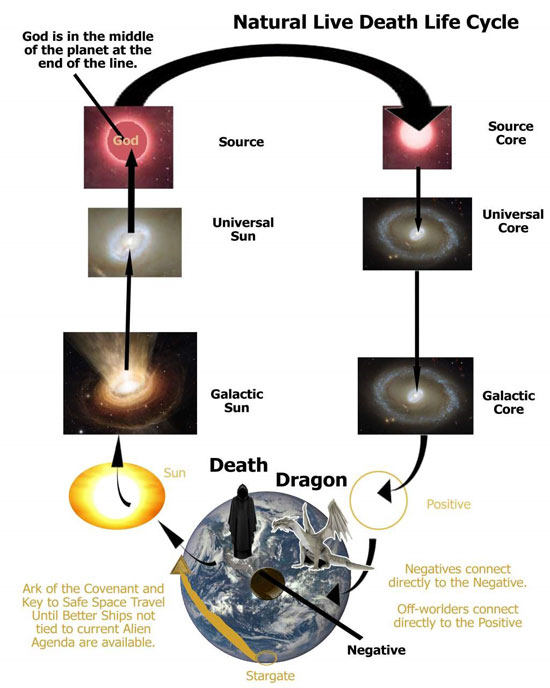 This is the natural life-death-life cycle which includes the Dragon to protect children being born on the planet and Death to decide who goes to God and who goes below to the Negative.

The Galactic Core must be released by the white aliens as soon as possible. What they had planned potentially was pretty disgusting – there is a number one human, the positive, that was to be taken first and her negative was to be taken last, that is why they put them in opposition since at least Memorial Day. This plan was called from what I understand “Generations Ahead.” The goal was to remove everyone off the planet with the exception of 144,000 individuals. They had made a malefic agreement for the majority of humans.

We need to stand up for ourselves as humanity. We deserve to be here. We deserve our planet to be restored completely without poisons being put in our water, food and atmosphere. No oil production is needed. We can provide housing for all. Thank you for being part of my Quest with God only.