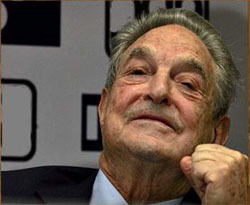 When Netanyahu and Orbán fight against Soros about human rights, Soros is bound to win.

The father of Zionism, Mr. Herzl himself, who could be described as being an anti-semite himself, had the gall, or Jewishness, to tell all the world’s Jews that they were Jewish pretenders if they did not come to his planned State of Israel, with him as the Grand Pooh Paw – only then could they call themselves real Jews. 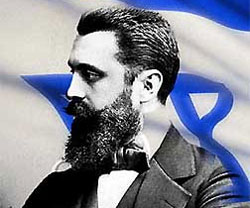 Is Herzl channeling Netanyahu from the grave?

Herzl was a hustler on the make. He did not want poor Jews to emigrate to the new promised land, but those with capital who could make him the Founding Father of Israel. He did not live to see it, but left us his ravings of an egomaniac in his classic, The Jews. 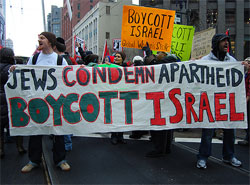 It’s a wonder if the new law working its way through U.S. Congress to criminalize anyone supporting boycotts of Israel will also be applied to Jews, even Israelis…

George Soros, the American multi-billionaire, is causing Benjamin (Bibi) Netanyahu a lot of trouble. At this particular moment, Netanyahu does not need any more trouble. A huge corruption affair, concerning German-built submarines, is rolling slowly and inexorably towards him. 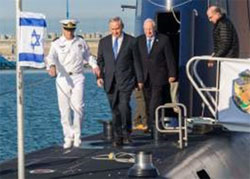 Netanyahu denies allegations of wrongdoing. Attorney-General Mandelblit ordered a probe and authorized police to question Netanyahu, who is suspected of receiving “significant gifts” from a local and a foreign businessman, and launched a criminal investigation against the Prime Minister for the 2 billion euro German deal. Meanwhile, several of Netanyahu business partners have been arrested.

Soros is a Hungarian Jew, a Holocaust survivor. The Hungarian governing party plastered his face all over Budapest with a text that barely hid its anti-Semitic intent. Soros’ sin is his support for human rights associations in his former homeland. He does the same in Israel, though on a much smaller scale. So Netanyahu does not like him either.

This has created an awkward situation. In July (2017), Netanyahu visited Budapest to meet the Hungarian Prime Minister Victor Orbán, who is suspected of being a mild anti-Semite. Netanyahu considers him a right-wing soul-mate. 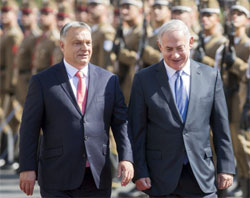 The Hungarian Jewish community was upset. They demanded that Netanyahu postponed his visit until the Soros posters were removed. Eventually most – but not all – of the posters were indeed taken down, and Netanyahu met with Orbán. But the entire episode showed that the interests of the State of Israel and the interests of Jewish communities around the world are not automatically identical, as Zionists would have us believe.

There was another incident prior to the Hungarian meeting. A few days earlier, at a public event, Orbán had lauded Admiral Miklos Horthy, the head of the Hungarian state during World War II, when Hungary cooperated with Nazi Germany like all of Eastern Europe (except Poland, which was occupied). So how could Orbán laud Horthy on the eve of Netanyahu’s visit? 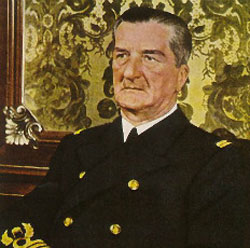 As a matter of fact, Horthy’s role is still hotly debated. A self-declared anti-Semite and enigmatic person, he succeeded where no other European leader did: he saved many hundreds of thousands of Jews by disobeying and cheating Hitler.

One of them was a woman who married a Hungarian Jew in Berlin and was deported by the Nazis to Hungary, where she survived, eventually reaching Palestine. Another was “Tommy” Lapid, a child in Budapest who became a famous personality in Israel. His son, Yair, is now a politician who seeks to supplant Netanyahu. He probably would not exist but for Horthy’s devious actions.

Small interruption here for a historical joke.
After Pearl Harbor, and after Roosevelt told the Congress that US was in a state of war, Hitler and his entire gang of foreign collaborators declared war on the US. The Hungarian ambassador in Washington was also instructed to submit a declaration of war to the Secretary of State, Cordell Hull, who decided to mock him.

“Hungary… Hungary… Are you a republic?” he asked.
“No, sir, we are a kingdom.”
“Really? So who is your king?”
“We don’t have a king, only a regent, Admiral Horthy.”
“An admiral? So you have a big fleet?”
“No, we have no fleet at all, since we have no coastline.” (Horthy became an admiral during World War I, when Hungary was a part of the Austro-Hungarian Empire which indeed did have a small fleet.)
“Curious. A kingdom without a king and an admiral without a fleet. So why do you declare war on us? Do you hate us?”
“No, we hate Romania.”
“So why don’t you declare war on Romania?”
“Impossible! They are our allies!”

Back to Netanyahu. Recently the Netanyahu government did two things which enraged many Jews throughout the world, and especially in the US. One concerns the Western Wall (formerly called the Wailing Wall) in Jerusalem. This is the holiest place of Judaism.

The Western Wall is not really a part of the Jewish Temple, reconstructed by King Herod some 2000 years ago, but just a supporting wall of the large artificial mound of earth, on which the Temple stood.

In 1946, the imposing wall was flanked by a narrow lane, which made it seem even higher. After the 1967 war, the entire Arab neighborhood was leveled to make place for a large piazza. The wall was turned over to the ultra-Orthodox, in return for their votes in the Knesset. Men and women were separated, of course. With the growth of feminism, this became problematical.

In the end, a compromise was found: a small part of the wall was set aside for “mixed” prayers of men and women, and also for Reform and Conservative Jews, who hardly exist in Israel, but constitute the majority among American Jews. Recently, under Orthodox pressure, Netanyahu decided he wants to revoke this compromise, causing great excitement among American Jews.

As if this was not enough, Netanyahu also wants to withdraw the recognition of Reform and Conservative conversions to Judaism, giving the Orthodox exclusive rights to perform conversions in Israel.

Since there is no separation between state and religion in Israel, a simple law suffices. Indeed, Israeli institutions are becoming more and more religious, so much so that a new Hebrew word, Hadata (roughly “religiosifiation”), has been invented. 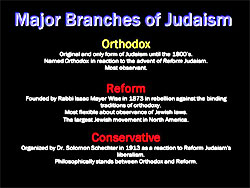 The Reform and Conservative Jewish institutions in the US do not care about the occupation, about the brutal repression of the Palestinians, about the daily killings. They support the Israeli government through thick and thin. But they care very much about the Wall and about conversions. Like Ivanka Trump, non-Jews often convert in order to marry Jews, so this is an important business.

It all seems like an inherent contradiction, and indeed it is.

Israel is defined officially and legally as a “Jewish and Democratic State”. A new law is about to strike the “Democratic” from the formula, and leave Israel only as a “Jewish State”. It is seen by many as the headquarters of the world Jewish people. Netanyahu has often declared that he considers himself the leader and defender of all the Jews in the world.

If so, can there be a conflict between the interests of the Jews anywhere and the State of Israel? There can and there has been from the very beginning. Theodor Herzl, the founder of Zionism and a Hungarian Jew, had discussions with the anti-Semitic leaders of Czarist Russia and elsewhere, promising to help rid them of their Jews and take them to Palestine. This common interest underlay many curious alliances at various times.

Anti-Semites always preferred the Zionists. Adolf Eichmann wrote in his confession that he saw the Zionists as the “valuable element” of the Jewish people. And so on.

Abraham Stern, called Ya’ir, an underground leader in British Palestine, split from the Irgun and founded a new group (called the “Stern Gang” by the British) whose main policy plank was to cooperate with Nazi Germany against the British, on the principle that “the enemy of my enemy is my friend”. He sent emissaries to German embassies but was ignored by Hitler. Eventually he was shot by the British.

In the first years of Israel, when David Ben-Gurion first visited the US as Prime Minister of Israel, he was admonished by his aides not to bring up the subject of immigration, so as not to irritate the US Jews whose money was needed desperately. Ben-Gurion demurred, but did what they said.

At the time, a journalist wrote a humorous piece about a community of hugely rich Jews in a remote part of Africa, who owned all the diamond mines in their country. When Israel needed money to buy flour for next month’s bread, the most talented Zionist propagandist was sent there. Knowing the desperate situation of his country, the man gave the most passionate speech of his life. At the end, no eye in the hall remained dry.

The next day the speaker got a message: we were so moved that we decided to turn all our property over to the natives and come to Israel as pioneers. 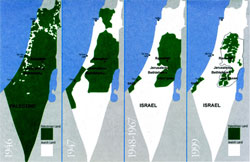 The declared aim of Zionism is to bring all the world’s Jews to Israel. Herzl himself believed that this would indeed happen, and in one passage he wrote that, once most of the Jews had come to the Jewish state, only they would henceforth be called Jews. All the Jews who chose not to come would cease to be called Jews and be just Germans, Americans and so on.

Wonderful, but if that happens, who will compel Donald Trump and his successors to veto all UN resolutions critical of Israel? Who will be left to fight against the movements – like BDS – that preach a boycott of Israel?

Well, life is full of contradictions. As are we. Netanyahu’s Hungarian adventures were not over with the Soros and Horthy affairs. Far from it.

While in Budapest, he took part in a closed meeting with the leaders of Hungary, Poland, Slovakia and the Czech Republic. Some fool forgot to cut the line to the journalists outside, and so they could listen in to some 20 minutes of Netanyahu’s secret speech.

To his East European soul mates, extreme right-wing semi-democrats all, the Israeli Prime Minister poured out his heart: the liberal West European governments are “crazy” when they impose conditions regarding human rights on their aid to Israel. They are committing suicide by letting in masses of Muslims. They don’t realize that Israel is their last bulwark against this Muslim invasion.

In the bible of Zionism, Der Judenstaat, Theodor Herzl wrote: “For Europe we would constitute (in Palestine) a section of the wall against Asia, serving as an outpost of civilization against barbarism.”

These lines were written 121 years ago, at the height of the colonial era. Repeating them today is, to use Netanyahu’s word, “crazy”. 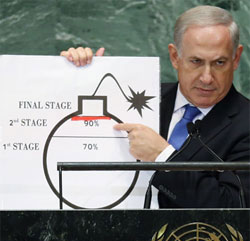