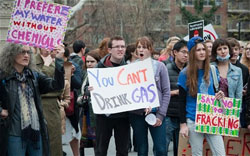 New research indicates that living near a natural gas hydraulic fracturing site is associated with increased rates of sinus problems, migraines and fatigue in Pennsylvania residents – a state that has over 9,700 fracking wells.

This study, from August 2016, is yet another in mounting scientific evidence and research proving that fracking has severe health risks. It follows a July 2016 Johns Hopkins study showing that fracking is linked to increased asthma attacks in Pennsylvania, a recent analysis of over 680 peer-reviewed studies that indicate “concerns for public health, air quality and water quality” and a compendium of peer-reviewed scientific papers, numerous government reports and findings, demonstrating the risks of fracking to public health, air and water quality, birth and infant health, the environment, and climate change.

“Enough is enough” said Diane Sipe, Pennsylvania resident and Steering Committee Member of Pennsylvanians Against Fracking. “It is abundantly clear that fracking is harming people, and the only solution is to stop fracking. The people in this State do not deserve to be put in harm’s way by leaders who are choosing to ignore the dangers of fracking and related infrastructure. It is time for Governor Wolf to follow the example set in New York, and put the wellbeing of his constituents above the profits of the oil and gas industry and ban fracking in Pennsylvania once and for all.”

The NSA Built a Secret, Warrantless, Shadow «Social Network» and You’re Already On It